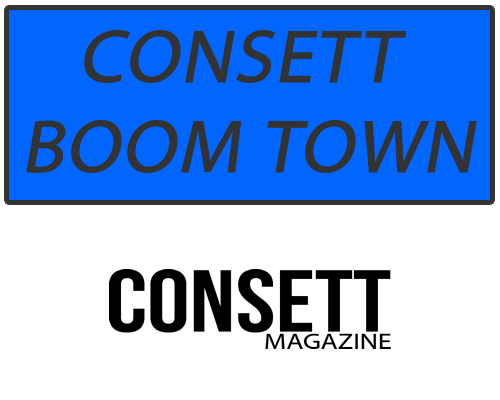 In 1841, the population of Consett was only one hundred and forty five people. The town rapidly grew soon after this because the hills of Consett were full of coke coal and black band iron ore. With coke coal and iron ore rich in the hills surrounding Consett, it was no surprise the town became home to huge blast furnaces which were used to produce iron and steel, two very important ingredients in British Industry during the industrial revolution.

During the 17th and 18th centuries, Consett and the Derwent Valley was life blood of the British steel industry as coal came to Consett easily from the nearby Tyne Valley, while imported high quality iron ore came from Sweden to the port of Newcastle upon Tyne. Steel from Consett is said to have been used during the construction of the Eiffel Tower in Paris in 1889, the Blackpool Tower, and more recently British nuclear submarines. Consett truly ruled the world steel industry during this time.

Henry Bessemer changed the British steel industry forever when he invented an inexpensive method to mass-produce steel from molten pig-iron. Henry Bessemer took out a patent on the process in 1855. The Bessemer process had been used before, most notably by William Kelly, but it had never been used on such a mass industrial scale before. The process basically removes impure parts from the iron by blowing air through molten iron. Blowing or oxidation of the molten iron keeps the temperature high and allows the metal to stay in a molten form for longer.

British iron ore is generally extremely rich in phosphorus. Using the Bessemer process, the British Steel Industry lost interest in Consett and the Derwent Valley’s geographical advantages and soon after, Sheffield would take over from Consett as the leading location for steel production in Britain. The Bessemer process made it possible to take away the phosphorus which is commonly found in British iron ore. Unfortunately, Consett had lost its place in British Steel Industry.

In 1980, the Consett steelworks were eventually closed as part of Margaret Thatcher’s strategy to revitilise British industry. Thirty-seven hundred people lost their jobs in Consett with the closure of the plant and the surrounding facilities. Money and jobs in the local economy dive bombed and Thatcher was despised by many in the town. We all know now that the Thatcher Government in the UK along with the Reagan administration in the USA set out and sadly accomplished the privitisation of industry, nationalised asset-stripping and the political attacks on unionised working people.

Unemployment in Consett worsened after the closure of Consett steelworks. In 1981, Consett’s unemployed percentage reached at much as thirty six percent. Since the closure of Consett Steelworks the town has flourished into a micro economy unaffected or influenced by the large city decisions in the North East of England. Consett industry today is in situated large factories on the Number One and Hownsgill industrial estates. Notable factories which account for the majority of employment in the town of Consett include united biscuits and frozen microwave meal company “International Cuisine”.

Consett has seen its fair share of ups and downs over the years with the rise and fall of the legendary steel works and the growth of the major factory industry in the area. What is in next in store for this little town? Who knows, but no doubt it will bounce back even better than before.