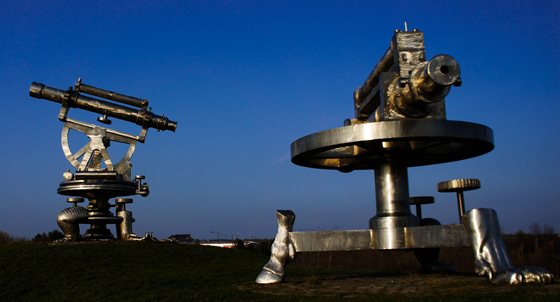 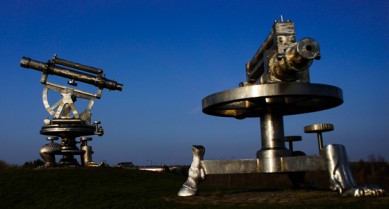 On the former Consett steelworks site beside the C2C cycle path there stands two huge sculptures based on nineteenth century surveyors instruments, a theodolite (used to measure horizontal angles) and a level (used to establish the bond between a surface to the horizontal.)

The theodolite stands on three stands; a human hand, a horse hoof, and the foot of a lizard type creature. The animal feet that hold these instruments upright are said to be inspired by symbolic heraldry found on shields, coats of arms, plaques and items associated with land and ownership.

The sculpture was commissioned by Sustrans and paid for with money from the National Lottery, Northern Arts, Derwentside Council, the Henry Moore Foundation, Consett’s Genesis Project and industrial sponsors.

Component parts were cast in Sheffield andGermanyand kept in storage briefly at Beamish Museum before being transported to Consett to be assembled on site. The piece was eventually unveiled, after a gestation period of four years, by the local M.P., Hilary Armstrong, on 22nd September 1997.

Included are a bird of prey, a horse lion, crocodile, cow and a primate’s hand. Cast in solid stainless steel, from originals carved by Tony Cragg, these large feet are both beautiful and at the same time, daunting.

The work sited at Consett, marks the watershed between the upland / moorland landscape and the extremes of the Industrial Age. Built on the Stanhope and Tyne Railway Line – the earliest commercial railway in Britain- Terris Novalis marks what was once Europe’s largest steel works. Local people see this landmark as a monument to the scale of local industry and its demise. If you are in the area, make sure to go and have a look at Terris Novalis and check out Tony Cragg’s tribute to the steel industry and the local area.