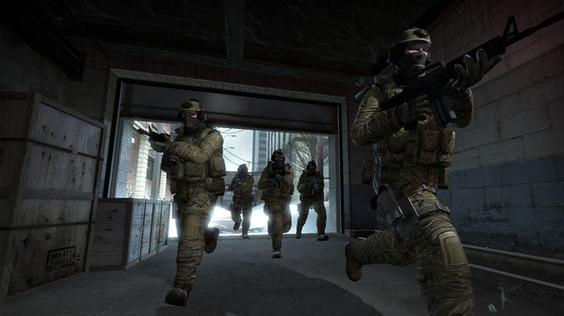 The hardcore FPS series is coming back to our screens at the end of the month with the new and improved Counter-Strike Global Offensive. Valve have decided for a multi platform release with the game being available on PC, PS3 and Xbox 360 from day one and is expecting the trademark game play to shine through.  Some of you may not know about the Counter-Strike series but for years Valve’s ultra fast shooter has been top of the pile on the PC. It’s been 8 years since the release of the last version, Counter-Strike Source, and this new game looks to build on the legacy.

CS:GO uses the same engine as the previous Counter-Strike game but it is heavily modified to a point where it is almost impossible to tell. The visuals look smooth and slick with the action being just as fast and furious as before. The format of the game is similar to long term fans of the series with the added bonus of Arms Race mode. Arms race used to be known as Gun Game mode but it was a modification on PC rather than a legitimate game mode. This will please fans of the series as Gun Game was a popular match with a large number of regular casual players.

Another nice addition is the inclusion of everyone’s favourite throwing weapon the Molotov cocktail. This will cover an area of the map in fire for a short period of time which will prove invaluable for defending tight spots and causing chaos amongst the enemy ranks. The MP7 also makes an appearance as a new weapon which will entice players to get into the close range action. As a avid CS:S player, I can’t wait for this release.  CS:GO is coming to PC, PS3 and Xbox 360 on the 21st of August on Steam, Xbox Live Arcade and PSN Store.