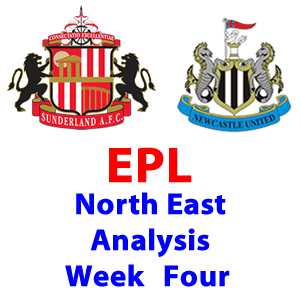 Football is back after a lacklustre international break and the Premier League did not disappoint with goals galore across all of the games. Star performers of the weekend had

to be Arsenal who went out and demolished new boys Southampton 6 – 1 with stand out performances from the ever present Lukas Podolski and the tenacious Gervinho. Arsenal looked hot and they need to be watched in the coming weeks.  Both North East teams had some eventful EPL highlights after this weekend’s action.

Sunderland were up against a struggling Liverpool side this weekend with the Black Cats still trying to get their first win of the season after two draws and having a match postponed. Liverpool have not been having the best of times under new manager Brendan Rodgers who was looking for a win to help take Liverpool further up the table and also to secure his job at Anfeild.

Sunderland took the lead at 29 minutes with new signing Stephen Fletcher bagging yet another goal for Sunderland. Martin O’Neil really did his homework around this one as Fletcher is looking like one of the star men of a strong Sunderland team.  They played Liverpool on the counter for most of the match as the Reds lack of creativity in the centre of the park. It was only after half time that Liverpool managed to score an equaliser. Luis Suarez scored a close range effort on the 70th minute.  The game ended a 1 – 1 draw after another spirited draw from the Black Cats.

In more EPL highlights, The Magpies were playing on Monday night at Goodison Park in Liverpool against the defensive powerhouse that is Everton. Both teams are predicted similar positions at the end of the season so every point counts. Many teams who go to Goodison Park often leave with nothing as the mighty Manchester United found out earlier in the season. Alan Pardew was up in the stands for this match due to the push-gate incident leaving Newcastle without his tactical input.

Things were not going good for Newcastle in the first half as an early goal by Fellaini was luckily called offside. Not long after Leighton Baines scored the opener as Newcastle had been on the back foot for most of the match with little chances on goal. It wasn’t encouraging to watch and Newcastle looked dull without much bite.  As the second half started Newcastle looked like a different team going forward with real purpose. It wasn’t long until Demba Ba who came on during the 46th minute for Marveaux, brought the score level with a trademark finish from the Senegalese sensation.

The second half was eventful after a number of questionable calls from the match officials. Newcastle imitated John Terry during the Euros, plucking the ball out from behind the Newcastle goal line and Hatem Ben Arfa was one on one with Howard when the whistle was blown and advantage wasn’t played. On the 88th minute Victor Anchibe scored what seemed to be the last minute winner for Everton leaving the travelling fans silenced. Football miracles don’t happen too often, but substitute Demba Ba managed to get the ball past Howard for a second time on the 90th minute.  The game ended 2-2 but some questionable officials decisions definitely had an effect on the score.

Sunderland play West Ham away next Saturday whilst Newcastle play Norwich City on Sunday at the stadium formerly known as St James Park. Next week’s EPL highlights should be good for both North East teams.

For all your North East EPL Highlights be sure to check out consettmagazine.com