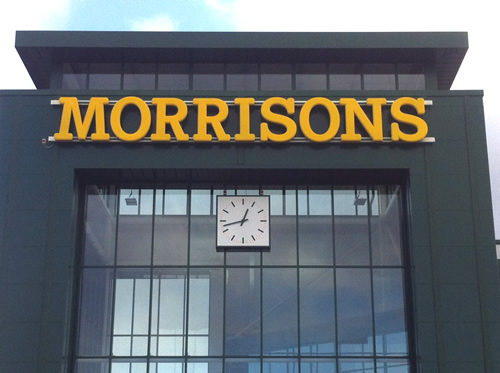 On the 26th November 2012, a new superstore Morrisons opened up on Front Street in Consett.

While many businesses have backed down on their spending during the economic downturn, supermarket chains such as Morrisons obviously have enough money to build brand new stores right next to existing stores. In the past few years food prices has soared way above the rate of inflation.

Morrisons now employs 319 people from Consett and surrounding areas. A total of 92 new jobs were created in the move to the new supermarket. During the recruitment drive the local Jobcentre Plus and Consett’s Derwentside College worked together to help Morrisons to find new staff. There was also a pre-employment course for workers without experience in supermarket retail. The new morrisons staff were trained in areas of expertise such as fishmongery, butchery, baking and flower arranging.

The new store is quite obviously much bigger than the previous store and includes a café to offer the people of Consett a new alternative place to meet up.

From December 2012, Consett Magazine will be available in the new Morrisons superstore.