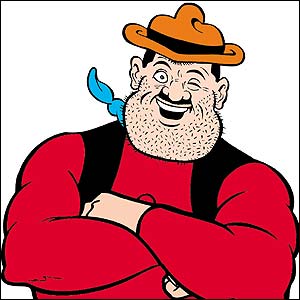 Since 1937, The Dandy has been one of the most popular weekly children’s comics available in the UK. With stories about the cow pie munching cowboy Desperate Dan,

Korky the Cat and the legendary Bananaman every week, The Dandy became a favourite of the UK. In the height of its popularity, The Dandy was selling over 2,000,000 copies a week around the world. This was an amazing feat when you consider that was back in the 1950’s. Since then, the readership of the comic has steadily fallen to a rather miserable 8000 copies a week and on the 4th of December 2012 the last ever Dandy was released.

Even though the Dandy is no longer printed, it has moved to a new and more up to date medium. Now in digital format, The Dandy is hoping to find a new lease of life. With more and more people using tablet computers to read books it makes sense to move with the times. Tablets such as the Amazon Kindle and the iPad have changed the way we get the news and books as it can be accessed with an internet connection or downloaded through a news stand app. As children and teenagers become more tech savvy, tablet computers are the norm. It is a sensible move to go where the audience is.

Does this movement of The Dandy to a digital format signal a big change in the publishing world? In 5 years time a newspaper could be a thing of the past leaving an age old media to finally be put to rest. This could be down to the next generation and their desire for more information at an instant. Newspapers could be seen as out of date due to the fact that their views and content are generally a day late.

For now print media is in safe hands with millions of people across the UK reading magazines and newspapers but these numbers are declining. What do you think is the future of print media? Is it hot off the press or just old news? Why not share your views below.