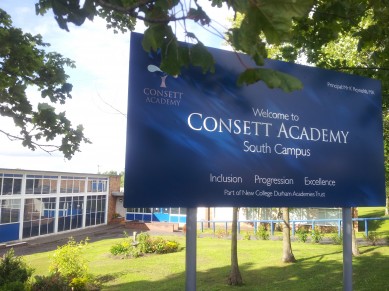 The plans for the new Consett Academy to replace the existing sites currently located at Blackfyne and Moorside. After many delays and much controversy the new

Academy has now been given the go ahead. This means that work on the new academy will soon be starting after much anticipation. As of May, piling work will be starting laying down the supports for the new school. This also means that plans for Consett AFC’s move to Crookhall is now also in the works.  After a number of significant delays and worries over funding it seemed like the new Consett Academy building may have been put on hold but it’s great to see that work is eventually starting on the Belle Vue site.

The new Consett Academy building is set to start work in May of this year and the new school will be finally finished around Christmas of 2014. This is much later than most people would have wanted but the new academy has plans for some great facilities for the school as well as the people of Consett. The academy’s facilities will also be used as a leisure centre due to the specialist sports facilities and brand new swimming pool.

The price of the development is currently pegged at £43 million for the whole facility and will be handled by construction company Carillion. The schools currently operate as two different campuses across Consett which has caused some travel issues for students living across the area. With the new site, these issues should all be ironed out. The new facility will be an ultra modern building with features to help reduce the carbon footprint whilst giving all the students a better learning experience.

Some people believe that the whole academy saga was unneeded and that before the schools merged things ran much smoother with fewer issues. On the other hand, this new building will be able to provide the children of Consett a great facility to learn and grow in our area.