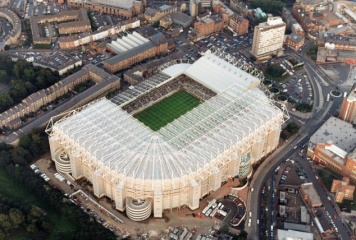 Tomorrow night will see Russian side Anzhi Makhachkala pays a visit to St. James Park for the second leg of the Europa League round of 16 clash against Newcastle United.

After a 0-0 draw in Moscow last week, Newcastle will be looking to exert their home advantage to see them through to the quarter finals. The match in Moscow was somewhat of a surprise as Anzhi were expected to go out and play attacking football with the likes of Samuel Eto’o and Willian on the pitch. This wasn’t the case as Newcastle United was in the driving seat for the majority of the match. The harsh weather and artificial pitch didn’t help the side from the North East and the match finished 0-0.

The home leg is hopefully going to bring with it some action and goals as in recent months St James Park has been a hotbed of action with a 3-2 win against Chelsea and a 2-1 win against Stoke.  Newcastle United will be missing their number one goal keeper Tim Krul after receiving a significant injury when playing out in Ukraine and captain Coloccini after breaking two bones in his back making an acrobatic clearance away from a number of opponents.  Rob Elliot has proven himself as a reliable number 2 keeper in Krul’s absence and Mapou Yanga-Mbiwa is getting the game time he needs filling in for the injured skipper.

After a successful cameo appearance against Stoke last weekend, youngster Adam Campbell will be looking to make even more of an impact in this Europa League tie. The 18 year old who was brought through the youth academy made a deft pass to Marveaux allowing him to set up the ever present Cisse for the last minute winner.

Yohan Cabaye will be leading the troops out tonight as captain and hopefully Newcastle United will be able to stand up to the brutal counter attacking talent of Anzhi and progress forward into the quarter finals of the Europa League.