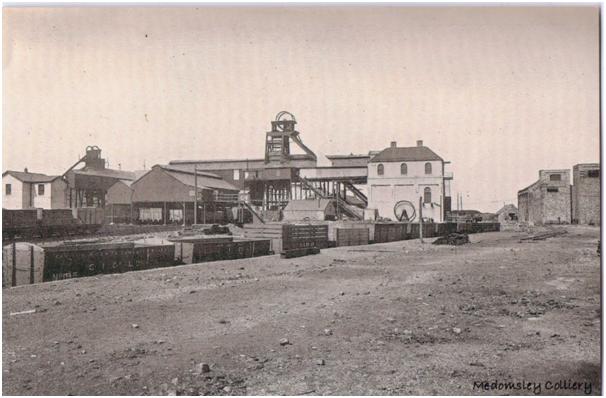 As you leave Bradley cottages and head towards the junction for Medomsley and Consett, directly in front of you there is a large field. In that field are two small fenced 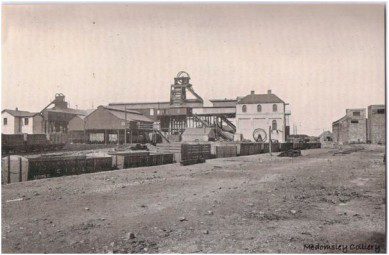 enclosures.  These are the 150m deep shafts of Medomsley Colliery. Opened in 1839 the wheels finally stopped turning in 1972. In 1923 a terrible disaster struck. Medomsley Colliery was considered a safe pit but on the 24th of February eight young men were to be involved in that pit’s worst tragedy.

At 7.25am on the Saturday morning, eight men entered the narrow cage that would hoist them back to the surface. There was a metal bar wedged across the cage at waist height, the only device that offered means of protection. In an environment where sudden death was always expected, this was the place where nothing ever went wrong. The cage sped up the shaft, daily maintenance checks ensured that everything would run smoothly.

The cage was nearing the top of the shaft when a terrible series of events began to take place. The banksman heard a huge crash. The cables began to stretch and the engine driving the headgear began to protest loudly. The engine man stopped the machinery immediately but it was too late, the cable parted and only the severed end appeared above ground. A bosun’s chair was rigged and two men were lowered into the depths. They found the cage wedged across the shaft 50 meters down and to their horror saw that the front of the cage was facing downwards. There were three mangled bodies lying on the roof, the other five had fallen to the bottom of the shaft.

The coal mine has gone now, along with the miners. There is no memorial to the dead but if you visit the churchyards around Consett you may find the names of those unfortunate men etched into their headstones.

Michael’s book “A Breed Apart” is a historically based novel gives a great idea of what the local coal industry was like back in 1906.  Available in both paperback and kindle format from Amazon.co.uk.