In April, Consett played host to one of the most inspiring and entertaining events to ever grace this small town. Consett Festival was a great day out for the whole family and 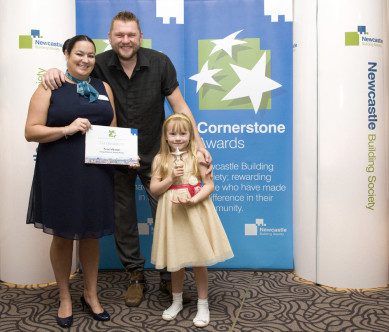 over 3000 people attended the festival on the day. Local organiser Brad Wilkinson succeeded to create a memorable day down at Consett Rugby Club and has been given an award to congratulate him for all of his hard work organising the event.

Newcastle Building Society’s annual Cornerstone of the Community Awards are given out to people across the North East to celebrate their selfless and worthwhile achievements in their communities. With awards going to people in the Chester-Le-Street, Sunderland and Consett, the awards looked to give people who have really worked to provide something great for their communities. It’s great to see a Consett local getting such an award for a day that for many will go down in Consett history.

This isn’t the end of the Consett Festival story as Brad and his team have already began to get things in place for next year’s event. After the success of the inaugural Consett Festival, the 2014 event is shaping up to be bigger and even better than it was this time around. This year’s festival had an attendance of 3000 people through the gates which completely eclipsed the expected turn out of around 1000.

This year’s festival has had a great response from a wide range of people from all over Consett including the local Police. Any event where there is music and alcohol there is always some concern but Consett Festival went past with not one complaint to the local authorities before and even after the event. This is a credit to the wonderful people of Consett who turned up and made the festival the fantastic day it was.

Do you have any memories or photos of this year’s festival? Why not email them to editor@consettmagazine.com to share your story.