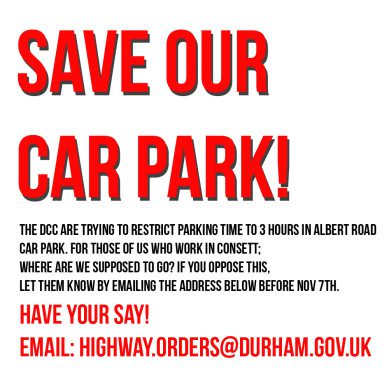 spaces with a 3 hour maximum limit between 8am and 6pm Monday through Saturday. These plans have caused uproar with a large amount of Consett’s community which already has a hard time finding a parking space in the town centre on most days. There are advantages of adding a time limit such as allowing a better traffic flow into the town centre but this will have a large effect on the people who work and own businesses based in the town centre.

The plan to add the 3 hour limit to the Albert Road car park is an attempt to free up spaces in the centre as by 9:00am on most days, the facility is already to capacity with a number of people parking illegally on the ends of rows. By adding the limit, many people who park up in the mornings and spend all day in the town will no longer be able to leave their cars in the car park without taking the risk of getting a fixed penalty parking notice. This isn’t too much of an issue for the casual shopper in the local area but for the people who have businesses based on Middle Street, these parking restrictions could cause untold inconvenience for many of the area’s business owners.

One side effect of this new parking initiative is that on street parking in a number of avenues around the centre of Consett will become extremely scarse for the people who live in these areas. This can be seen in Taylor Street where most of the cars parked on the road do not belong to property owners in the street. This is a major source of annoyance for a number of home owners in the area.

The idea of adding a time restriction to the Albert Road car park is the 3rd route which the council were looking at as a way to free up spaces in the town centre facility. Previous ideas included using Pay and Display systems to charge for all parking but this was eventually turned down due to being rejected by local members.

If you want to make a difference and keep the Albert Road car park available for use for everyone in the town centre then don’t fear. You can voice your concerns by sending an email to highways.orders@durham.gov.uk or via post to Lorraine Holding, Legal Assistant, County Hall, Durham, DH1 5UL. Get these objections into Durham County Council before November 7th if you want to make a difference in the parking battle.