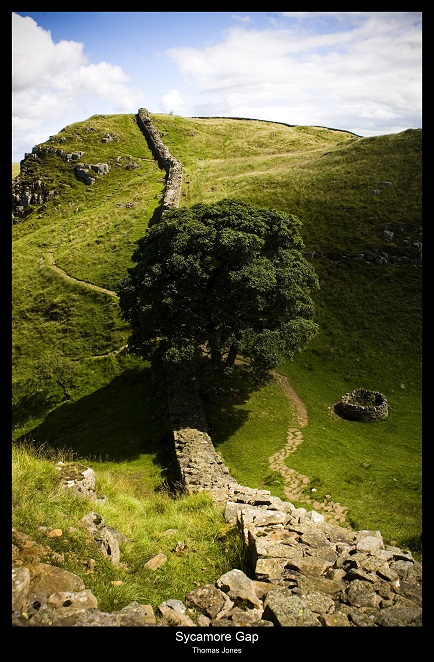 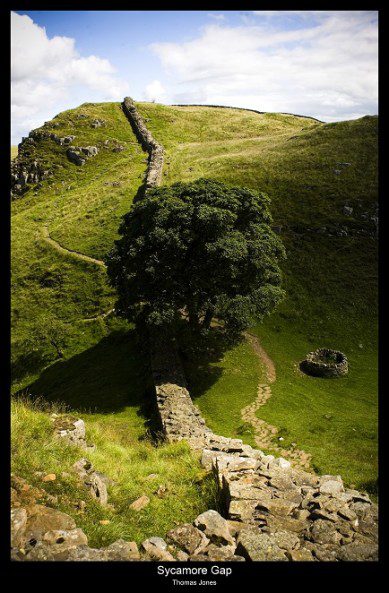 the treetops like sticky buds to a dog’s coat. Despite this being a Friday morning in late August the air has a chill to it that one would imagine only present in a more autumnal month. What a wonderful time to be alive; I’m setting out on a new photographic journey in what is to me, a new country.

Northumberland is a different land indeed to my native West Yorkshire; a land of such sterile beauty, far less tread than the cow and calf et al of my youth. There’s something to discover here; something that I can call mine. I jump into my car, camera stowed safely in the back, sat nav busily directing me on my route. I’m heading to the ancient wonder that is Hadrian’s Wall; a structure that, for me has always had an element of mystical wonder about it. In particular, one specific spot of this seventy-odd mile long buttress of the Roman Empire – Sycamore Gap.

This single, lonesome tree stands in the sharp trough between the peaks of two hills, barely a couple of hundred feet high or apart, yet proves to be such a magical site, it draws visitors from all corners of this earth.

I set off from my car, the air less cool now under the leaden sky that characterises northern Britain. The prevailing westerly wind has found the confidence to run again, whipping the long grass against my legs, throwing the trees into a frenzied, distance hiss, reminding me that despite its paths and car parks, this is still a very wild place to be.

It may still be summer, but today feels very much like autumn. I stride out, although my target isn’t more than a mile away, I know with a fully laden camera bag and the hop-scotch of steep drops and climbs, this one isn’t going to as easy as I first thought. I arrive at the ruins of a mile castle, the remains of a Roman dwelling where the centurions will have lived, eaten and died defending what must have felt like a very distant corner of the empire. Their legacy is woven into the very fabric of these ancient stones, almost as if something of those people still survives here.

I press on; for my map tells me I’m but a few moments from my goal and fulfilling a childhood dream. My decent this time is a 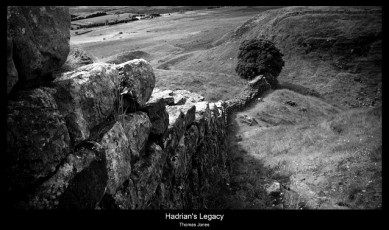 quicker one, for I’m above my muse for the day, bathed in sunlight for seconds as the clouds dart across the mottled blue grey sky in an endless race to the horizon. I’m curious; I’ve not seen a soul during my walk, although I’ve only just realised, but I’ve had these hills to myself. Before I set the camera, I stand for a few moments, silently taking in raw beauty of my surroundings. The silence is only broken by the occasional call of a Curlew and the wisp of the wind through the wild grasses. I spend some time photographing this most solitary of locations, trying to capture the loneliness I feel only these highlands can bring – the feeling of been closer to a higher power is something one can’t avoid here, I feel I’m a much smaller, less of a significance here; a mere blink in the eye of this most rugged of lands.

I climb the eastern edge of Sycamore Gap, to try and get some shots that’ll lead you into the views, not just focusing on the classic and much replicated square on shot. I could spend a day up here, discovering this land’s secrets but today the British climate is against me and in the absence of any wet weather gear for both me and the camera, I have to call it a day. I head back to my starting point, still slightly overcome by the raw beauty of this desolate land, only a matter of miles from my home but it feels more like a different world – something from a Tolkien novel – a different place and time altogether…somewhere magical.

This article was written by Thomas Jones and submitted for release through the Consett Magazine. If you have a story to share please don’t hesitate to get in touch.