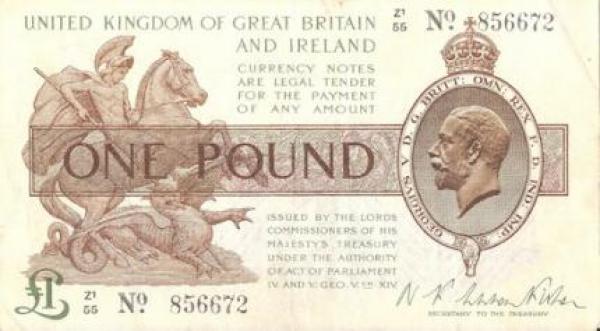 This article has been submitted by Howard Bell. If you want your stories shared then please get in touch using the contact page. 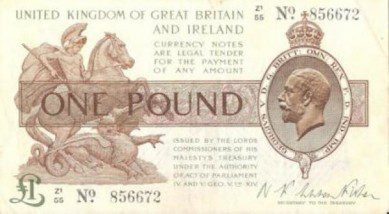 the Fractional reserve system. The threat of war caused the British public to start asking for their money back. This caused serious problems for the banks and brought them to the brink of bankruptcy. War was declared on the 28th July 1914 and the government gave the banks breathing space by offering capital control, this gave the banks the ability to refuse to pay out on withdrawals as and when they saw fit. The bank holiday, a week later, saw the government step in again by extending the Holliday by three days, and urgent negotiations began. Lloyd George, the then chancellor did all he was asked of by the banks, thus when the banks reopened customers wishing to make withdrawals were issued with newly legal tender printed notes. These notes were issued by the state and backed by nothing more than the credit of the state; these new notes were dubbed “the Bradbury pound” because they were signed by the then secretary of state John Bradbury. As soon as the banking crisis was over Lloyd George again did as he was told and stopped issuing the notes. The banks pointed out that, if the government continued to issue these interest free notes the bankers would not be able to make a healthy profit from the war. Despite Lloyd George’s capitulation precedence had been set in Britain which could be adopted today.

Since the end of WW 2 Britain has gone from one the biggest industrial producers in the world to one in which no matter the education your choices are stacking shelves or serving others, just to earn the money you need to buy the products and eat the food you serve and make.

Our infrastructure has deteriorated to the point we have a shortfall in energy supply, our water infrastructure continues to leak, our roads are physically damaging peoples cars and our railways are in such disarray that private companies find it cheaper to pay penalties and walk away forcing the government retake ownership. For instance, Richard Branson’s company FirstGroup forcing the government to take back ownership of the East Coast Mainline in 2009 because the contract was not profitable. (http://www.telegraph.co.uk/finance/newsbysector/transport/9476687/How-the-East-Coast-Mainline-contract-hit-the-buffers.html)

Yet government promotion of infrastructure rebuilding projects could help us kick start our failing economy back to life and that’s where the “Bradbury Pound” comes in. National credit, when done right, is money issued by government exclusively for physical production, the money

gains value on that production rather than the value of some supposed physical metal stored in a bank volt somewhere or even worse, the whim of the “Market”. If there is no production the money that is created in this way is worth no more than the paper is printed on. In this way

National Credit is a promise from society to itself and the intension to carry it out. Since the money isn’t borrowed from private sources it carries no interest, for this reason what the National credit is spent on is critical.

We’re told we have no money, that we have to cut back, save, reduce the deficit yet Cameron and Osborn borrow more each year from private investors “with interest”.
Cut more, borrow less. Borrow more, cut less. The two choices our PM has told us we have, but there’s a third choice the “Bradbury Pound”!

That one simple action which took only a few days to implement the first time around could completely transform The United Kingdom, turning it from a failing economy to an economy awash with credit where the industrious, productive British people would lawfully flourish in peace and real happiness.

The office for National statistics says Britain’s credit is worth over 20 trillion pounds. We are a wealthy nation with a huge potential, so let’s harvest that potential and show the world what truly puts the “Great” in Great Britain*, the people!
Please join the thousands who have already signed the petition to bring back the “Bradbury Pound”

*Great Britain is a geographical name for the Island containing England, Scotland and Wales.

Fusion for Business pledges to create up to 50 new jobs by the end of 2022.