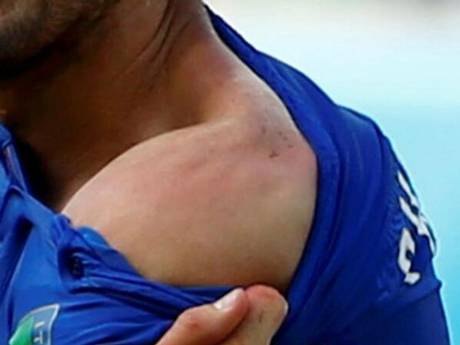 Oh no Luis not again

The world cup is going to be overshadowed by Luis Suarez bite on Italy defender Giorgio Chiellini, this isn’t the first time a Suarez bite has hit the headlines during a match, on 20 November 2010, Suarez bit PSV’s Otman Bakkal on the shoulder during a 0–0 draw. Ajax suspended him for two games and fined him an undisclosed amount which the club said they would donate to a “good cause”. The Dutch daily newspaper De Telegraaf  branded Suarez the “Cannibal of Ajax”. The KNVB increased Suarez’s suspension to seven league matches and he then apologized for his actions through a video uploaded to his Facebook page.

On 21 April 2013, in a 2–2 draw with Chelsea in a Premier League game at Anfield, he appeared to bite opposing player Branislav Ivanovic. It was not noticed by the officials, and Suarez scored an equaliser in injury time. This was 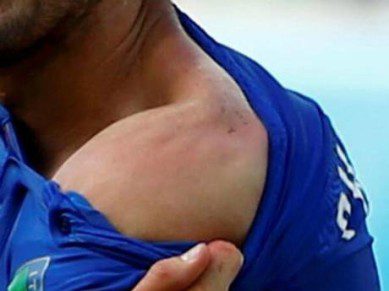 the second incident of its kind involving Suarez and he was charged with violent conduct by the FA and fined an undisclosed sum by his club. Contrary to claims from Suarez, Ivanovic did not accept an apology. Suarez accepted the violent conduct charge but denied the FA’s claim that the standard punishment of three matches was clearly insufficient for his offence. A three-man independent panel appointed by the FA decided on a ten-game ban for Suarez, who did not appeal the ban; the panel criticised Suarez for not appreciating “the seriousness” of the incident when he argued against a long ban. The panel also wanted to send a “strong message that such deplorable behaviours do not have a place in football”, while noting that “all players in the higher level of the game are seen as role models, have the duty to act professionally and responsibly, and set the highest example of good conduct to the rest of the game – especially to young players.”

In his second season with Liverpool, Suarez was found guilty by a three man panel from the FA of racially abusing Patrice Evra during a game against Manchester United in October; he was given an eight-game suspension and a £40,000 fine.

But bizarre events on the pitch aren’t limited to Suarez, there have been some bizarre incidents over the years, Newcastle manager Alan Pardew was involved in an incident with Hull City midfielder David Meyler, Alan Pardew head butted the Hull man and was fined £100,000 by Newcastle, was handed a three match stadium ban and a four match touchline ban.

The FA are looking into the incident between Suarez and Chiellini and this is what they have said; “FIFA can confirm that disciplinary proceedings have been opened against the player Luis Suarez of Uruguay,”.

FIFA’s disciplinary code sets a maximum ban of 24 matches or two years, but the longest ban in World Cup history was eight games for Italy’s Mauro Tassotti for breaking Spain’s Luis Enrique’s nose in 1994 with an elbow.

Suarez has attempted to defend himself following the incident, telling Uruguayan television: “These situations happen on the pitch, we were both just inside the area, he struck me in the chest with his shoulder and he hit me in the eye as well.

“These are things that happen on the pitch and you shouldn’t attach so much importance to them.

“I’m very happy to have qualified. We are taking each game as it comes, we know that we’re in a difficult situation, we’re at our limits now.”

Chiellini tried to show referee Marco Rodriguez the mark but no action was taken, and he believes the authorities must now look back at what happened and punish Suarez.

He told Sky Italia: “Suarez has bitten me and the referee saw it, but then there is the need to have the courage to take decisions.

“We will see if there is the courage to utilise the TV images to ban him.”

Uruguay manager Oscar Tabarez insisted he had not seen the incident but claimed that Luis Suarez “is the target of certain sections of the press”.

“I would like to see it first,” said Tabarez. “If it happened then I think the referee had to have seen it first. I didn’t see the incident and I don’t want anyone to speak for me about it.

“Suarez, in addition to errors that he may have made, is a target for certain sections of the media.”

“If we believe people are attacking him, as has happened in this press conference, then we’re going to defend him,” he said.

“He’s a vital player, a very important person to the group.”

“I have watched the incident several times on television,” said Boyce.

“There is no doubt Luis Suarez is a fantastic footballer but once again his actions have left him open to severe criticism.

“There is no doubt that FIFA must investigate this incident very seriously and take whatever action is deemed necessary.”

Italy boss Cesare Prandelli – who went on to resign – confirmed he had seen the bite marks.

He said: “I didn’t see Suarez biting him but I saw the bite-marks on his shoulder but the referee’s assistants were so busy they didn’t see anything.

“It’s a shame, it’s a real shame that it turned out like this.”

I would think the FA would make an announcement by the end of the week and I would expect Suarez to miss the rest of the world cup.