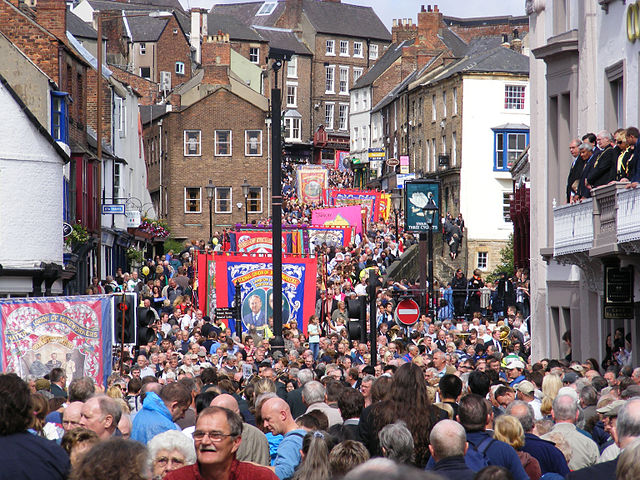 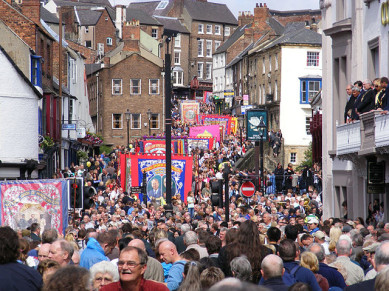 events in the world, traditionally associated with the coal mining heritage. Durham Big Meeting is held on the second Saturday of July, and has been said to attract over 300, 000 people at its peak. However, the Big Meet which took place on Saturday 12 July 2014 may have broke the records, with the most people attending since 30 years ago. The first Gala was held in 1871, created by The Durham Miners Association. It developed into the largest unofficial miners and trade union gathering in the United Kingdom.

There is no set time or place for when or where the Big Meeting is to start. Those who attend gather in the city centre of Durham, and as the crowd gets larger, the meeting is hard to miss. At 1 o’clock, the platform party arrives and opens the meeting. After the speeches, some selected bands and banners march to the Cathedral for the Miner’s service.

Durham Big Meeting sounds unappealing towards teens and young adults, however a majority of the crowd are in fact of a younger audience. It seems  that many young adults attend the Big Meet to socialise and enjoy a few drinks or more, and under-age drinking can hardly be spotted through crowds of thousands. Some people find this disrespectful towards the meeting as this is not its purpose, however some are appreciative that the number of people attending the Gala has risen.

The Durham Miners Gala attracts hundreds of thousands of people, and it is expected that the numbers will continue to rise in the upcoming meets.