We’ve been spoilt with some excellent weather this summer and as temperatures have soared higher and higher throughout June and July, it would be the final Saturday of the later that would prove to be the hottest weekend of all.

Not only did the region enjoy the hottest Saturday of the year, so far, on the final one of the month but we were also treated to some of the most sensational and entertaining events of the summer.

Of course, the biggest event in the annual North East calendar over the entire weekend, was the Sunderland International Air-Show which, for its 26th successive year, drew record breaking crowds to Seaburn sea-front with a kaleidoscope of colour and an aerial spectacle of stunts.

These included wing walking, aerial acrobatics and, of course, the more historic and traditional attractions like the “Battle of Britain Memorial Flight” and the appearance of the “Red Arrows” who, this year, are celebrating their 50th display season with a very special 21 minute routine that will also feature in every appearance they make this year.

Then, closer to home in Stanley, Beamish Museum held a special tournament to mark the 125th anniversary of the Northern League that included a series of five-a-side (seven-a-side with substitutes) matches.

It was a case of “getting the old style kit on” for teams taking to the pitch in the event which as supported by the Durham Amateur Football Trust.

The old style football kits were provided for the teams, who included the likes of The Gateshead Cavaliers, The Pitz Miners and the Beamish Livewires, among others. With the only break from a traditional kit being trainers instead of boots. This was mainly due to the need to protect the natural playing surface of the field.

The matches followed a regulation format of ten minutes each way with a five-minute break. The games were preceded by a brief meeting to allow the players and the referee, to agree the rules for the games.

The history behind the tournament, and the display of items at the museum’s Resource Centre, began in what is widely acknowledged as the high point of amateur football in the 1940’s and 50’s. It was during this period that the teams from the local regions, and especially County Durham, regularly played to a full Wembley Stadium, regularly winning the Football Association Amateur Cup.

This led to the formation of the Durham Amateur Football Trust with the aim of keeping these memories and achievements alive. With the Northern League being second only to the English Football League, as the oldest in the world.

So, not only has this area seen a spectacular series of events over the final weekend in July 2014, but ones of great historic importance where commemorating the “Battle of Britain”, the enduring importance of the Red Arrows and the region’s place in the history of our national sport are all concerned. 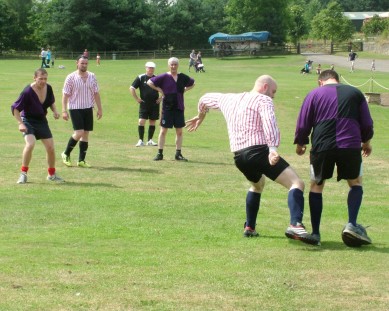