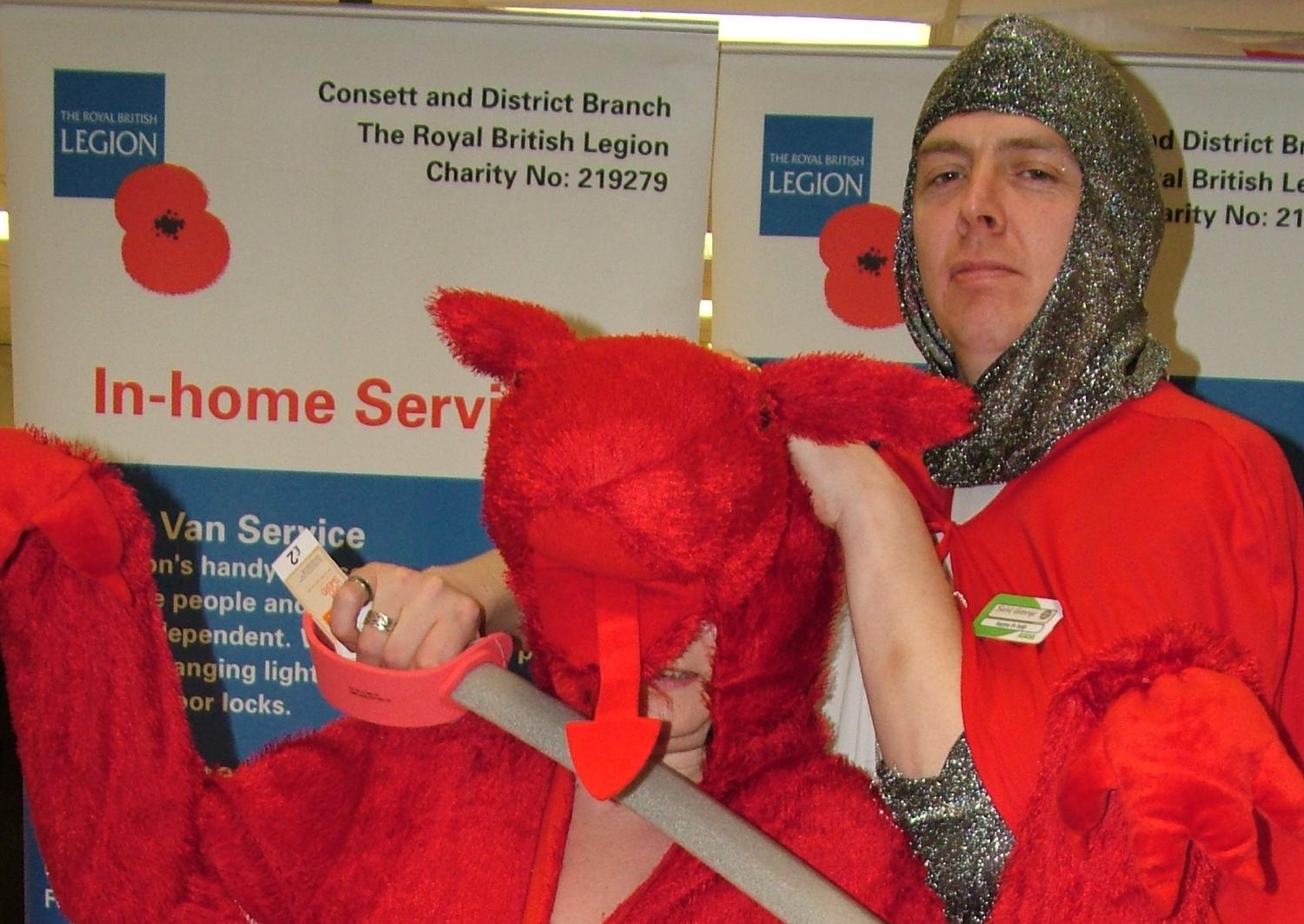 St George slayed the dragon this year with the help of ASDA Stanley as the staff put on a day of dragon sized fun for the customers. With the highlight being St George , with the assistance of some mini-knighs amongst the children getting to slay the dragon through out the day.

Instead ot the ASDA greens, the colours for the day were red and white with the staff dressing up to raise funds, paying a £1.00 to do so, for the Royal British Legion (Consett and District Branch) who were also in the store fundraising.

As well as the dragon slaying, there was also ASDA archery with customers competing to win England merchandise. Other than being great fun, it also bought out English Pride.

The stanley store has also seen great success with other charity fundraising successes, including the recent MacMillan Care Easter Weekend enabling Macmillan nurses to have a Remembrance Day in the superb Joan James Chemotherapy Unit at the University
Hospital of North Durham.

The store raised an impressive £300, the target needed from colleagues cake bakes and a hamper. The nurses also wanted to hold a Pampering Day for 20 of the patients currently receiving chemotherapy.

And just a fortnight later ASDA reaised an incerdible £1.030.00 for Mcmillan Cancer Care. This event was in memory of one of their own, Anne Black, a nights colleague who passed away recently.

As well as a luxury Exrtra Special Hamper, the collegues wore green (a deeper green than ASDA’s) and paid £1.00 as well as the sixty-second cash dashes that took place around the store. This involved two colleagues, who were each dressed in green wigs and Macmillan
sashes, having to compete to sell ten tickets as fast as possible followed by an immediate draw with the customer winning a £10 gift card.

“It was fast, frantic and great fun and involved lots of teamwork. But it shows what we can do when we all work together” said store manager Suanne Russell. She Continued “Our customers
have supported us all the way. So, a huge thanks to them and our colleagues.”

The cash was handed over by the family of Anne Black to Macmillan Representative Michelle Muir. With a very special thanks to Debbie Storey who donated a collection taken at a family funeral “Bob’s” and which amounted to £100 taking our overall total to over £1000,the original target. A great gesture about which Suanne added ” To Bob and his family, thank you doesn’t seem enough”.

All of the above events and forthcoming ones all feature in ASDA’s 50th Annivarsary and the ASDA Foundation will be issuing grants to 50 local community projects across the UK for between £5000 and £1000.

You do not need to be a charity to apply, as long as the request benefits local community activities and events important to the customers as well. Simply go to www.ASDAfoundation.org for further details or ask to talk to the Community Life Champion in your local ASDA.