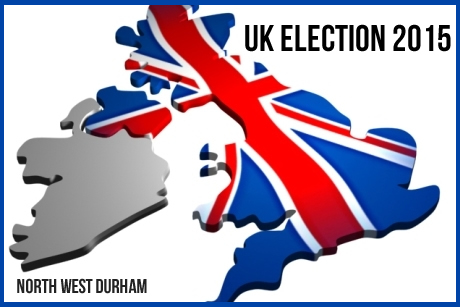 This month sees the voters going to the polls.

Traditionally, Labour has had quite a safe seat here in North West Durham.
Labour MP Pat Glass won the election here in 2010, and is up for re-election again this month.

Let’s take a look at all of the candidates for North West Durham, we asked each candidate for a quote and here they are:

“Locally I continue the fight to break one party domination, Labour Party domination. Nationally I’m determined to protect the progress Britain has made since 2010 fromeither the harshness of a right wing Tory Government, or the spendthrift destructiveness of Labour. Only the Liberal Democrats have the head to balance the books, and the heart to protect the most vulnerable.”

“I have a new vision for North West Durham – making our area a prime business location. New prosperity means first-class career prospects for us and our children and improved public services. Our young must be globally competitive, through increasing secondary school attainment. I believed in joined up health and social care and an In/Out EU Referendum. I will hold Durham County council firmly to account.”

I believe that by standing for the Green Party I am offering local residents a real choice in the forthcoming election. Many people want to see real change. If elected I will put all my energy into ensuring that North West Durham is represented with passion and commitment. I urge people to vote positively for what they believe in.

Families living in North West Durham & the North East in general have not done well under the Tory-led Coalition Government. Pay freezes, the bedroom tax, zero hour contracts, minimum wage jobs, cuts to our council services & the NHS have all made life so much harder. Labour will bring fairness and balance to Government, restoring the NHS services we all need.

At time of publishing this piece, UKIP had not yet submitted their quotation to Consett Magazine.