Home Lifestyle In The Bluebell Woods – Written by Sydney Peck 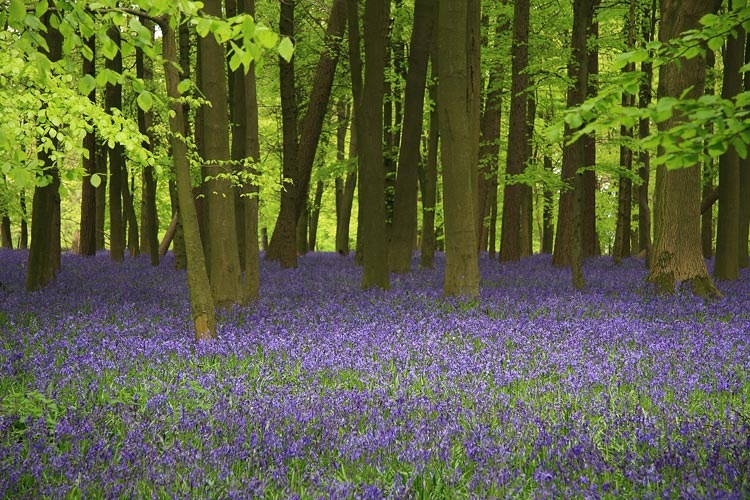 Shotley Bridge woods must no longer exist because the builders have  covered so much of the land around the village with houses. They probably ceased to exist about thirty years ago, judging from the appearance of most of the houses. But for me the woods disappeared from ken about twenty years even before those houses. I never could find them, even though I rode my bike on long summer evenings up the hilly roads and byways around Shotley Bridge and sometimes around Consett. At weekends, when I had more time, I sometimes spent a whole day touring around the district without coming across them. I often wonder if they ever really did exist. People I asked had no notion of where woods such as I described could be located.

Locals, even the old timers, couldn’t suggest where the woods might be. In truth they couldn’t understand why  I wanted to track them down anyway. I could offer no logical reason to the locals for wanting to see the woods. Was I interested in buying a piece of land for a house? Because if so there were some good sites for sale a half mile along the Consett Road. No, I didn’t want to buy a site. Did I know somebody in the locality who lived in these woods and was I trying to find these people? What was my name? Raydon?  No we don’t know any Raydons around here, You’re not looking for old Joe Rayburn up the Medomsley Road are you? No, I wasn’t.  Was I looking perhaps for a bike scramble or some other athletic event to do with bikes? That’s a bonny machine you’re riding there. No, there was no bike-link to my woods questions. Did I just want to enjoy a bit of a stroll to smell some fresh air? Because if I did there was a park and a beautiful river just down that bit of a path o’er yonder, bonny lad. No, I had  plenty of fresh air behind the shiny handlebars of the bike. There was no help forthcoming from the locals then. Although they were friendly in their treatment of a strange young man, they plainly felt I was a few bricks shy of the load.

Eventually I stopped looking for the woods. However, I often recalled them in my mind’s eye, and relived the events of one afternoon when I must have been about four years old. It was summer, and like all summers recollected from one’s early childhood it seemed an intensely hot affair. I could recall no preliminary arrangements being made, no discussion of the forthcoming trip, no preparing of any sandwiches or flasks of tea. No indication that we were going to escape the terraces and cobbled streets of Bensham, the vinegar factory and the tram lines which were hot to the touch. All I can recall is that we were on a packed bus of the O.K. Company which ran a half-hour service between Consett and Marlborough Crescent Bus Station in Newcastle. We got on the bus as it came through Gateshead, on its way down Bensham Bank and over the Gut Bridge, before it coughed and roared uncertainly up Lobley Hill. The bus was packed to the gunwhales, with every seat taken and more than the legal number standing. The sliding top panes of all the windows had been fully opened but it made little impact on the heat inside the bus. Men had their jackets off and ties removed and collars open. Women fanned their faces with newspapers. Children were cranky and sat on laps putting up with the discomfort until they could get off the bus.

Getting off the bus seemed the only thing to enjoy about the journey. It was rather like those restaurants that make you wait so long that you are glad of any food when it is eventually served. You may have been only slightly hungry when you went in, but you were starved by the time the waitress arrived bearing food. It wasn’t so much that the bus was uncomfortable, but rather that it lacked any kind of positive comfort. The seats were definitely padded and in good repair, yet they did not invite you to linger in their embrace more than a brief moment. The cooling system was indifferent, and was  easily outshone by opening the sliding top panes in the windows. As to noise control it was deficient in  many regards so that it was difficult to hear normal conversation above the roar of the engine, especially going up the steeper hills such as Lobley Hill in low gear. Yet the noise wasn’t deafening, if you know what I mean. The bus had its advantages, it was faster than walking; but it had its many disadvantages too. In short, I think the person who chose the name for the bus company had a subtle grasp of the quality offered by the service. It wasn’t awful, it wasn’t excellent, it was merely O.K. And that was good enough for most passengers that hot summer’s day.

Through the dense jungle of people I found it difficult to see out of any window, much less form any idea of where we were going. The trip seemed longer than the half hour or so that it must have lasted, partly because of a child’s lack of time sense, and partly because of the interminable heat, sweat, fanning, and whining of restless children. Even if I could have found an avenue through the  mass of hot humanity, I would probably not have been able to identify much of the world passing by, because the expanses of white shirts, and the white fanning newspapers, and the white socks and dresses of the little girls all combined to produce so much glare that my eyes were squinted up most of the time. To tell the truth I may even have dozed off with my semi-closed eyes and the heat and the movement. It’s no wonder I ended up with no idea of where the woods around Shotley Bridge were located. The bus obviously stopped at some point and we must have got off, though I may have been dozing and only woke as the bus disappeared in a roar of hot diesel fumes.

We must have walked some short way but all I can recall is suddenly being in the tranquil cool shade of the bluebell woods. All the glaring heat and noisy constriction were gone. The air of the glade was deep and cool. It was given a  life other than just moving molecules of gas by some distant stream’s faint swirling sound, like woodland fairies dancing on tissue paper,  The air seemed to speak to me in the whispered language of the stream, and its soothing tones caressed my hot four-year-old cheeks. With shoes and socks thrown off, my bare legs were soon damp from the knees down with brushing through the moist grasses of the woods’ floor as I ran here and there  to whichever bunches of wildflowers caught my eye. My eyes were drowned in the sea of green. Above my head was a sky  completely filled with translucent leaves of birch and beech, and all around at shoulder height there seemed to be waving ferns at the foot of every tree. Underfoot, a  spongy carpet of last year’s leaves and this year’s grass crumped slightly and sprang back into place after you passed by, as if you’d never been there at all.

I only have the dimmest recollection of what my mother was doing while I was prancing around, but I can recall picking armfuls of wildflowers and dumping them on her lap.  So many kinds of flowers came to my over eager hands, and their names in those days were unfamiliar to me. There were spreading red campions in places where a little sun shimmered down to the woodland floor. There were ox-eye daisies swaying proud and tall above the crowd of golden coltsfoot. But none of these took my fancy as much as the myriad bluebells which had spread to every shady nook and cranny of the floor of the leafy sea. It was love at first sight. Every one of these tiny blue mermaids had a straight smooth stem about five inches tall, and at the top every one turned down her head shyly  in  silent  blue whispers. These creatures were too delicate to pick, and it never even crossed my four-year-old mind to try, but I ran to my mother and pulled her by the little finger over to where the biggest clumps lay spread out taking their ease. She humoured me by coming with me for in reality the bluebells were everywhere to be seen, and she could quite easily see them from where she sat on the woodland floor, her lap covered with wildflowers. She admired them as I did, and put into words for me the description of them which I was not then able to. She too found it unnecessary to pick any of the bluebells. It was sufficient to have a short conversation with and about them, and then go back to her resting place, and wait for the next armful of lesser wildflowers.

No doubt the day in the bluebell woods ended with some unseemly bus ride back home to the hot tram lines of Bensham, but I am glad that I have no memory of it. Indeed I cannot really recollect the day ending at all. The lack of time sense when you are four has the advantage of allowing what may well be a short, intensely-lived experience to telescope into a  one of much longer duration, sometimes without any definite end. It may well be that the bluebell woods of Shotley Bridge were no more than than the overgrown garden of some elderly maiden aunt whom my mother was visiting that day. Or perhaps they weren’t in reality located in Shotley Bridge, but some other location, confused geographically by the young mind. But they were there somewhere, and I really had seen them, I really had smelled them. Perhaps it’s no accident that the locals thought I was a few bricks shy of  a load. To try to recapture childhood memories is like trying to preserve the beauty of a flower by picking it for a collection. Its beauty is gone with the picking.