Home Consett News Reach for the Sky – By Lorraine Weightman 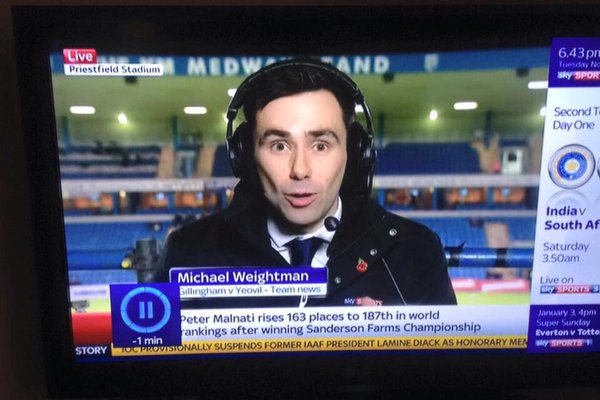 As he finished his commentary, I heard those long awaited words, ‘Michael Weightman Sky Sports ‘

From the age of four he organised football matches in the front garden. Carefully placing his two younger sisters in opposite small white plastic goals, he started commentating. He was always Captain of Newcastle United as well as the other ten players and he also played every position of the opposing team. His Dad and I smiled as we watched him out of the front porch window pass the ball to himself as he became every player, giving detailed commentary on how the game was going.

Inevitably Shearer scored and Michael high five’d his sisters as he ordered them to change sides for the second half. Not sharing his enthusiasm, Katherine and Emily wandered out of their goals to play on the slide and swings. This was when he took full advantage, executing a perfect diving header before acknowledging the cheering crowds.

Football as with a multitude of youngsters was Michael’s passion and when he wasn’t playing he was watching it on television.

Over the moon with his season ticket when he was five he travelled on the bus with his Dad and other fans from ‘The Duke’ in Consett to support his team.
Throughout his teens the dedication remained and he volunteered at the age of 15 to join hospital radio to increase his presenting skills.

After choosing to do a Journalism degree at Sunderland University he continued with his hospital radio work and was asked to report on a local Derby match. The Sunderland Echo knowing his love for his team ran a story on him standing outside the Stadium of Light wearing his Newcastle shirt. His competence was increasing and he was loving every minute.

It was no surprise when he intimated his desire to go to London to pursue his career. He was offered a job at Sky in 2008 with the goal of working for Sky Sports. In 6 years this was achieved and he became sub editor.

After moving on to Sky Sports News as a football planner his intentions were clear and here was given the opportunity to trial his reporting skills. So on November 12th 2015 as I reached to change the channel I shed a tear, as all the lovely memories from 25 years ago returned.

There was my son in headphones with his name on the screen. As he finished his commentary, I heard those long awaited words, ‘Michael Weightman Sky Sports ‘