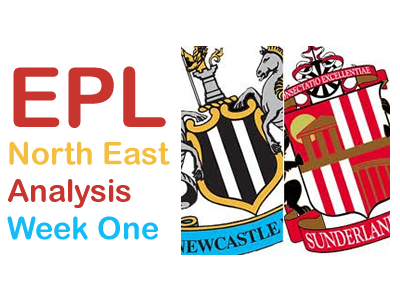 The first weekend of the premier league has come to an end with Everton beating Manchester United in the final draw of the opening weekend. Elsewhere in the league, there were goals galore with Fulham and Swansea winning their matches by five goals to nil! For the teams from the North East, things didn’t go as smoothly. Here are some EPL Highlights of your favourite local teams.

Sunderland were down at the Emirates Stadium to face Arsenal in their first match of the season. With many people predicting an Arsenal win, Sunderland had a mountain to climb. After an early attempt on goal from the Black Cats, things didn’t go their way.

Arsenal pilled on the pressure with new signings Lukas Podolski and Santi Cazorla unable to break Sunderland’s seemingly impenetrable defence and score an opener. Sunderland stayed firm and the advances of Arsenal substitute and new signing Oliver Giroud couldn’t seem to get past Mingolet in the end. Things ended 0-0 at the Emarites which is a perfectly acceptable result for Martin O’Neill and his Sunderland side that were though a defeat may be on the cards. Arsenal fans will be left wondering if the exit of star man Robin Van Persie may have had a significant effect on the result.

Even though the game ended goalless, Sunderland did a great job closing down the notoriously tricky Arsenal and kept them at bay for the majority of the match. My man of the match has to be Simon Mingolet. His performance between the sticks kept Sunderland in the match and looked at the top of his game throughout the match. Keep an eye out for more Sunderland EPL Highlights from Consett Magazine.

For the next of EPL highlights, Newcastle were playing at home this weekend against 4th place finishers Tottenham and their new manager Andre Villas-Boas. Both teams had to deal with some personnel issues with Newcastle Captain Collochini and Tottenham regular Scott Parker both sidelined with injury and Tottenham were suffering from a lack of strikers. With Jermaine Defoe as their only option, Tottenham started strong against a somewhat lacklustre Newcastle side having all of the chances in the early game. With 2 shots hitting the woodwork before the break, Tottenham looked the better going into the break.

After the break and a bit of a tactical change for the Magpies, Newcastle capitalised on bad clearance from Kyle Walker and Demba Ba struck a fantastic curling shot into the back of the net. After a moment of madness Alan Pardew was then sent to the stands for shoving the 4th official after failing to notice a ball by Gareth Bale was actually out. He has now been charged by the FA for misconduct and is awaiting his punishment.

After this things went from bad to worse for Newcastle as a scrappy goal from Jermaine Defoe brought Tottenham level Things didn’t stay level for long as midfield maestro Hatem Ben Arfa found space and made an inspired break on goal. After being brought down in the box by both Lennon and van der Vaart, Ben Arfa slotted home a nice penalty to finish the match 2-1 to Newcastle. What a great way for the magpies to start the new season.

My man of the match is Demba Ba. His goal was his first since February and it’s great to see the big man back in form again. For more EPL highlights keep checking Consett Magazine each week for your local Premier League run down.

Next Saturday, Sunderland will be looking to pick up three points against Reading at The Stadium of Light whilst Newcastle’s next match is on Thursday in Athens as they play Greek side Atromitos in the final round of qualification for the Europa League. This is the first time since 2006 Newcastle have been involved in European football and this 2 legged affair will see the Magpies progress into the group stages.

Along with EPL highlights, we will be bringing you match reports from Newcastle’s European campaign and also selected Consett AFC fixtures. Remember to keep checking www.consettmagazine.com for all your local football news and EPL highlights.