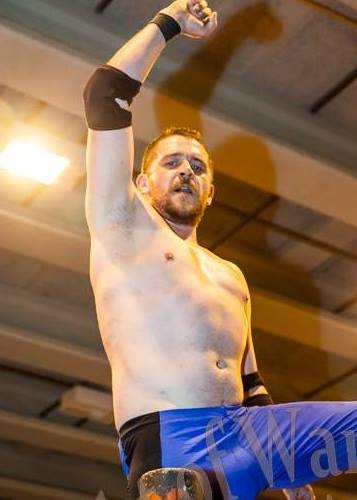 An ex wrestling champion from Blackhill is set to take to the stage for the first time in a musical production of Alice through the looking glass. Although Micky Emberson, 38 is no stranger to the entertainment business. He started his journey as a young guitarist and got his first taste of the stage at aged 16 playing at ‘the back o’ the shaft’ and continued to be a regular on the band circuit for the next 20 yrs with bands like S.O.L.O.W and Dr. Lipshzit which were regulars at local bikers rally’s and were hugely popular with the younger generation rock scene. However at 22 he tried his hand at his other passion… Professional Wrestling. He worked hard on the northeast wrestling scene for 13 years over coming injury to entertain the fans and win 2 championship title belts, a good run as a tag team champion and even delved into the world of hardcore wrestling.

So why acting? why now?

It hadn’t crossed my mind much till late last year when I decided to join spotlight CTP. They’re an amazing amateur theatre group with some excellent young performers which I have learnt a great deal from and 2 amazing directors Helen and Andrea that have gave me lots of support and helped me find a voice I never knew I had. I was legitimately surprised when I landed a role with a solo. I would urge anyone with an interest in musical theatre to look this group up.

Since starting this new chapter of my life I’ve found myself taking it to other areas of acting which resulted in me landing a role in an independent movie which is due to start filming in November.

The upcoming production of Through the looking glass has an excellent script which has been cast wonderfully and a musical score that compliments it perfectly.

Micky will be performing in Through the looking glass from the 15th to the 19th November at the Empire Theatre. Tickets available from the box office: 01207 218171