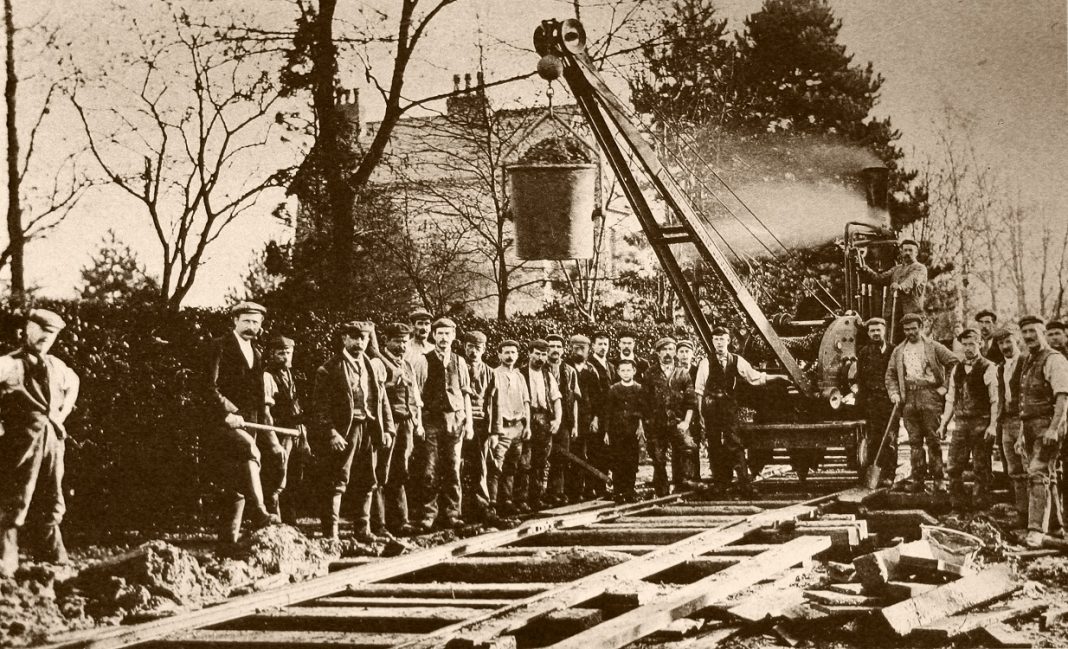 During the early industrial days of the Derwent valley the advancement of the railway was all important. It moved the coal, iron, limestone as well as the people needed to keep the industries growing. This was the time of the Navvy. A hardy breed who found shelter and lodgings where they could during the long laborious months and sometimes years of laying tracks and building the bridges. During the years of 1865 to 1866 the Blaydon to Consett rail line was being constructed. Many of the navvies during this period found accommodation at Swallwell, Winlaton Mill, Winlaton, Blaydon, Ebchester and Consett. Most were boarding in standard family homes helping supplement the costs to the families that already lived there. Many times these people would have many more men boarding with them than would have been allowed in licensed properties. But these were hard times and hardy men who accepted the situation. At Swallwell there were also a couple of make shift rows of wooden houses built to help accommodate the needs of this moving workforce.

However, the most industrious created a couple of small hamlets of Turf Huts the first just after the bridge which crossed the river at Burnopfield on the way to Consett and another further on toward the town. These huts, which I suppose we today would describe as Hobbit Houses, were crudely built but set in some of the most glorious and beautiful parts of the Derwent. The homes were described as wooded construction with turf blocks for walls about a foot thick. The roofs were timbered with branches interwoven and grass turfing laid over the top. Most of the homes consisted of 2 or 3 rooms each 12 to 18 feet long and 9 to 12 feet wide with a central fire made of brick, with an abundant fuel supply. The beds where make shift, more like the cots found on boats. The furniture crude stools and tables but effective. They did not only house the workmen but also many had families who’s area’s were curtained off for privacy. Many of the makeshift homes where owned by the families who took in the lodgers. One of the women who owned one of the homes, Mr’s Smith when talking to a reporter stated that before she would let a knew lodger into one of her beds she would make sure he had a clean shirt before he did so. In her words “When men have been on the tramp, there was know knowing where they had been” and “everyone knows that travellers got strange bedfellows”.

The main food was pork which came from the pigs which the community reared themselves. Supplemented with rabbit and other game which came their way, even in the off season. Cold tea and water from the stream was used to quench their thirst, very few of the men being drinkers. The hamlets were made up of both English and Irish workers who lived and worked together without discrimination or animosity. Many of the children of the Navvies working the Derwent, when old enough, could be found labouring at the brickworks near Pont Burn, helping supplement their parents costs. They were an industrial lot. On a Saturday the women would press the best clothes with a tiny iron, heated by the embers of the fire, and lay them out across all the beds in preparation for Sunday. They would attend the local church or sometimes a local clergy would come to them and give a service in the hamlet. It was a hard but romantic way of life.

Things were not always perfect though. Over a period of 3 months an “Extraordinary Highwayman” laid siege to the hard work navvies. On the days they were paid he would lay in wait jump out and rob them. Over and over the local police tried to catch him but to no avail. However, on 23rd Dec 1865 PC Forster of Craghead and a number of his colleagues decided to stake out the area, knowing the men had just been paid that evening. It was on the path from Leadgate to Burnopfield when they came across a fellow who had just been robbed of 3 and half pence, not a small sum in those days. They encouraged him to go back the same way, only this time they would follow in the shadows. Within only a few minutes a man jumped out of the bushes pushed the man to the ground and demanded money. The police promptly dropped on him and took him into custody. It followed that he was a man by the name of Bates who worked as a Pitman in Lintz Ford. The following day he was sent to Lanchester to appear before the magistrate.