With the Beast from the East ravaging County Durham with strong winds, heavy snows and freezing temperatures, those who work in the public services have had a difficult time performing their normal duties.

But many Durham County Council employees have gone the extra mile to help the county cope with the wintery weather. In the last few days, council workers have been rescuing sheep from snowdrifts, battling blizzards to deliver medication, and transporting people through the snow to vital hospital appointments.

Support worker Lisa Quinn normally works at the Pathways day service in Stanley, but – when the weather forced Pathways to close – Lisa and some of her colleagues volunteered to help out with the council’s supported housing team.

Over the past few days, Lisa has walked miles – often through blizzards – to ensure elderly and vulnerable residents in the north of County Durham receive essential supplies such as medication, groceries and hot meals.

Lisa even cancelled her day off and has been calling on day centre users in her spare time to check that they are well and have enough provisions.

Lisa said, “The weather has been terrible at times, but I would rather be helping someone than sitting in the house doing nothing.”

The supported housing team’s regular staff have also been working extra hours, with one employee even sleeping over at work every night last week.

Senior manager Phil Emberson has been using his Land Rover to pick up medication for a 93-year-old Consett resident and deliver it to her home. 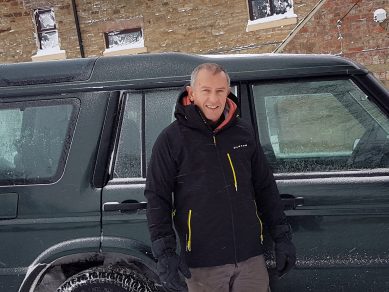 Phil Emberson with his Land Rover

Phil said, “I was more than happy to help out, but what I did was nothing compared to what staff on the front line have been doing.”

“There have been so many stories of workers going beyond the expectations of their roles and battling through extreme conditions to make sure that our residents are safe, warm and comfortable. I can’t stress my admiration enough.”

The Civil Contingencies Unit, meanwhile, called on the assistance of Durham County Council’s countryside ranger Adam Dixon to take Mary Orr from her home in Blackhill, Consett, to the University Hospital of Durham for a vital appointment.

Mrs Orr said, “When I saw the weather I thought I was never going to make it for my treatment – I was very worried.”

“It’s great to know that there are services out there willing to help in situations like this. It really makes a big difference for people like me.”

The team at the Civil Contingencies Unit also helped a resident who has diabetes and had no food left in the house. They contacted Tesco, who donated a food parcel, which the team delivered.

Up in Teesdale, near Harwood, Steve Biggs and Stephen Hill were operating a snow blower when they noticed two sheep buried in the snow. The men dug out the animals – who they think might have been pregnant – and moved them to a place of safety.

Steve said, “All you could see was their heads. Judging by the amount of snow they were under, they must have sat down to keep warm and they looked like they had been there a while because their legs seemed to seize up.”

“It only took about five or 10 minutes to free them because the snow was quite loose, but it was too packed in for them to move.”

“It was probably just as well that we got them out when we did as it wouldn’t have been that much longer before they were fully covered.”

“It’s not something I’ve done before, but I’d do it again if I had to. You can’t let animals suffer.”

Though Selby Cottage Childcare Service had to close on Wednesday and Thursday, they were able to open on Friday with a skeleton staff. They made sure they contacted parents who work for the NHS and the emergency services to let them know childcare was available.

The childcare manager at Selby Cottage Childcare Service, Kath Shields, said, “We made the decision to reopen this morning and contacted those parents who work in the NHS and other care services to make sure they had provision for their children as we know how important it is for them to get to work.”

Kath also said that her team “set out clearing the whole site to make sure we are accessible to everyone on Monday morning – they really are snow angels.” 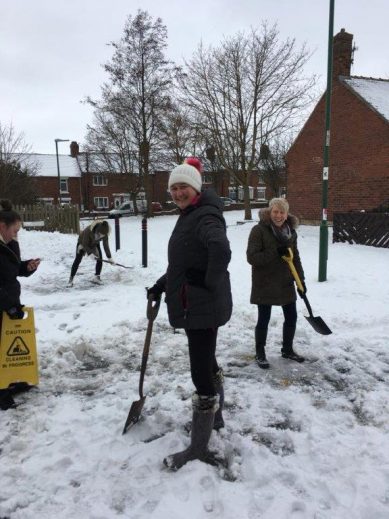 Neighbourhood wardens were out last week, checking on elderly and vulnerable residents. In Stanley, they helped a pensioner who was alone and had run out of electricity by topping up her meter and clearing her path of snow.

Tony Johnston, a bereavement coordinator, has been getting up at 4 am to clear paths at Durham Crematorium so funerals can take place. And many of the staff at Durham and Mountsett Crematoriums have been walking to work through the snow to make sure services can go ahead.

Though council staff are doing all they can keep vulnerable and elderly residents safe, members of the public are urged to check up on any friends, relatives or neighbours who they think might need assistance.

Durham County Council’s director of public health, Amanda Healy, said, “When the temperature drops, people are at an increased risk of a wide range of conditions including flu, pneumonia and hypothermia, with young children, older people, and those who are disabled or have a long-term condition most at risk.”

“We would advise people to ensure their home is warm. They should have at least one warm meal a day, regular hot drinks and keep active. If possible, it is always best to stay at home during very cold weather.”

“We would also ask people to check on neighbours and relatives to make sure they are safe and well, are warm enough and have plenty of food and any medications.”

“The work our staff have been doing across the county is a fantastic example of people going the extra mile to make sure others are safe and well.”

(The featured image shows Mary Orr with Adam Dixon and her son Malcolm.)