A County Durham bin crew have brought a little extra Christmas cheer to one of their biggest fans.

For the past three years, Durham County Council refuse collectors Gary Robson, Lee Draper and Paul Foster have all chipped in to buy their biggest supporter a Christmas present.

Ryan Cunningham – aged ten – has additional needs and goes to Villa Real School in Consett. The high point in Ryan’s week is when – as he phrases it – ‘the men’ come round each Thursday.

Whatever the weather, Ryan always waits outside his home – in his own high-vis vest – to see Gary, Lee and Paul when they call round.

The three binmen recently visited Ryan at home to give him a Christmas card and present. They told Ryan that Santa Claus had left the gift with them to pass onto him.

Lee said, “It comes out of our own pocket and we don’t mind because he’s a nice lad.”

“He loves the bin wagon and we just thought it would be a nice surprise for him.”

Ryan’s mum, Jacqui, said, “Ryan had seen the binmen come round and had seen the flashing lights and he was interested, so we used to go out and just watch them and then over time they started stopping and speaking to Ryan.”

“Every week they have some sort of conversation and they always make a little fuss of him.”

“What the crew do for Ryan is unbelievable. I just think it’s something they should be recognised for. It’s really nice that they take time to speak to him and it makes his day.”

Durham County Council’s head of direct services, Oliver Sherratt, said, “We are really proud of our big-hearted bin crew for their very kind Christmas gifts to Ryan over the last few years.”

“It helps demonstrate how much our teams care for the communities we serve, and I know that he regularly brightens up their day as they go on their rounds.”

(The article’s main image shows the bin crew with Ryan and his mum Jacqui.)

Bring Back The Bradbury Pound 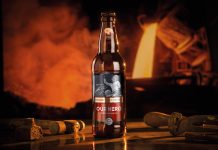 Consett Beer to Be Launched in Honour of Boxer Glenn McCrory