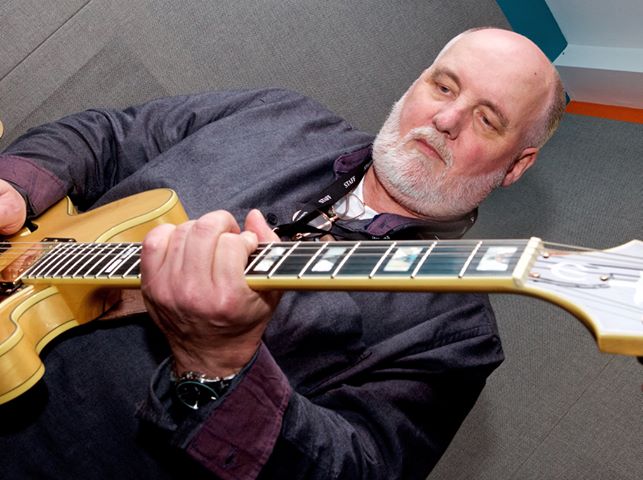 “With a cracking band who share a marvellous bonhomie, this show is a must for anyone with the slightest interest in music. It’s entertaining, informative and it ‘works’. Look out for this show. You will not regret it“. Ian Wood, (Get Ready to Rock!) Read the full review at www.bit.ly/stbandreview

The latest of this ‘songs and stories’ show featuring a brilliant six-piece band and multimedia projections can next be seen at The Steel Club, Consett on April 11th 2019. Steve’s musical career began with his first ever gig at the Freemasons Arms in Consett with his band Bullfrog. Now he’s taking his show back to his home town!

Steve Thompson has written songs that have been recorded by Celine Dion, Sheena Easton, Elkie Brooks (riding high once again on BBC Radio 2)’, The Hollies, The Searchers, Tygers of Pan Tang, Baby Ford, Colin Blunstone, Elaine Page and Chris Farlowe.‘Steve Thompson Songwriter’ features Steve’s own band playing new versions of the songs that he’s written for many of these and other artists. In the show he  also tells the stories behind these songs as well as anecdotes from his time in the music industry, working closely with an equally impressive list of Producers such as Gus Dudgeon ( Elton John, Chris Rea); Rodger Bain (Black Sabbath); Christopher Neil (Mike & The Mechanics, Marillion, Gerry Rafferty) and Peter Collins (Rush, Gary Moore, Bon Jovi)……

As Steve reflects; “when I was doing all this stuff back in the seventies, eighties and nineties  I had no idea I was creating history. Now with my new show with the band I’m having a terrific time telling the stories and sharing that history. There seems to be a genuine thirst to engage with this”

In a long and varied career, Steve also wrote and produced some key recordings during the ‘New Wave of British Heavy Metal’ (NWOBHM) including Raven, Venom (both huge influences on rock giants, Metallica) and Tygers of Pan Tang, who at one time featured another collaborator of Steve’s – guitarist John Sykes, who went on to join David Coverdale in Whitesnake.

The show features the stories behind the compositions and insights that promise to be as humorous as they are interesting!

Steve is also bringing a series of talks to the Steel Club. All talks start at 7pm and there is a £2 cover charge.