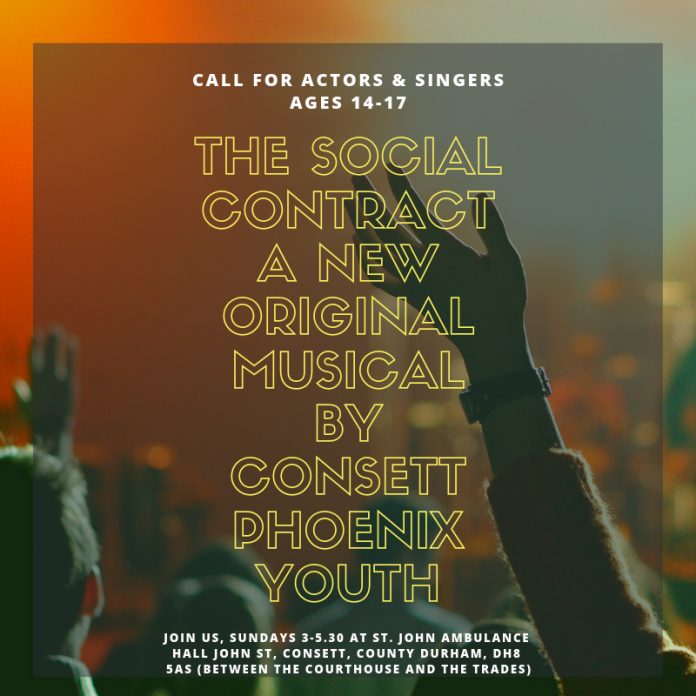 There’s always a feeling of excitement at the weekly sessions for Consett Phoenix Youth and that excitement is growing steadily at the minute. The group have been working since November on writing a new and original musical – songs and all. They are very close to the completion of the writing process, with only small tweaks to be made. The result of this process, The Social Contract, tells of a young girl who strikes a Faustian pact to become a vlogging celebrity after receiving an invite to meet with a promotions company (of highly dubious origins). Of course, the girl fails to read the small print and gets much more than she bargained for.

Writing of the stage play has been a collaboration between CPY members Natalia Dobbie, Chloe Gray, Imogen Harrison and CYP’s musical director Damian Huntley with original songs by Damian Huntley. Comedy has been the central tonal focus for the writers who share a love of shows like Parks & Recreations, Rick and Morty and Brooklyn 99. That shared humour and vision has led to a script which feels current and lively. Says Imogen Harrison, “Having full creative control over a script is such a gift; we’re able to tailor the character’s voices, needs and interests in such a way that the world those characters inhabit becomes a slightly off-kilter version of our own.”

What comes across most strongly while watching the actors workshop and hone the script, is that there is a great joy in ownership. They’ve written something which they’re proud of and throughout, they have put aside ego.

But here’s the rub… Consett Phoenix Youth more actors. The have not allowed their vision to be constrained by the group’s size and there are songs and acting parts for more actors or singers than the group currently has. If you know anyone between the ages of 14 and 17 who have any interest in acting or singing, get in ch
You can Contact us via Facebook or by email: bhx7@live.co.uk