A play about what is arguably the greatest achievement of any sportsperson from the north east is due to kick off in three weeks’ time.

Carrying David – a show based on Consett boxer Glenn McCrory’s 1989 world title triumph – will begin its tour of the north east at Tyneside Irish Centre on May 31st.

Glenn faced Patrick Lumumba in a bout for the Cruiserweight World Title at the Louisa Centre in Stanley on 3rd June 1989. Though very much the underdog, Glenn managed to win the match in front of a passionate north-east crowd.

At the age of just 24, he became the first boxer from the north east to clinch a world title.

Glenn’s victory was especially emotional because it was inspired by his terminally ill younger brother David.

David suffered from a degenerative muscle-wasting disease called Friedreich’s Ataxia, a condition that made it difficult for him to breathe and walk. Glenn often carried David around on his back – a fact which gave the play its name.

Carrying David charts the highs and lows of Glenn McCrory’s journey towards claiming the world title, as well as exploring his relationship with his brother.

By turns funny and deeply moving, Carrying David is a tale of two brothers inspiring each other – with one battling to make boxing history and the other fighting simply to stay alive.

Carrying David was written by Ed Waugh. Ed’s previous works include the tremendously successful Mr Corvan’s Music Hall – which toured the north east in 2017 – and The Great Joe Wilson.

Another of Ed Waugh’s plays, Hadaway Harry, led to the idea for Carrying David.

Ed said, “Glenn saw Hadaway Harry, about world champion Geordie rower Harry Clasper, in 2015 and asked me to adapt his autobiography Carrying David for the stage.”

“Carrying David is the most dramatic thing I’ve ever written. It’s very funny, but also very emotional. I was in tears writing it.”

You can book tickets by visiting the websites of the venues or by going to https://www.wisecrackproductions.co.uk/. 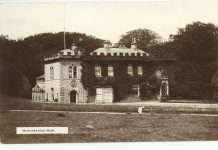 Hamsterley Hall and the Sheriff’s – A Brief History of the... 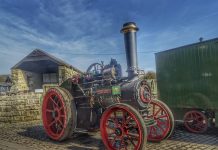