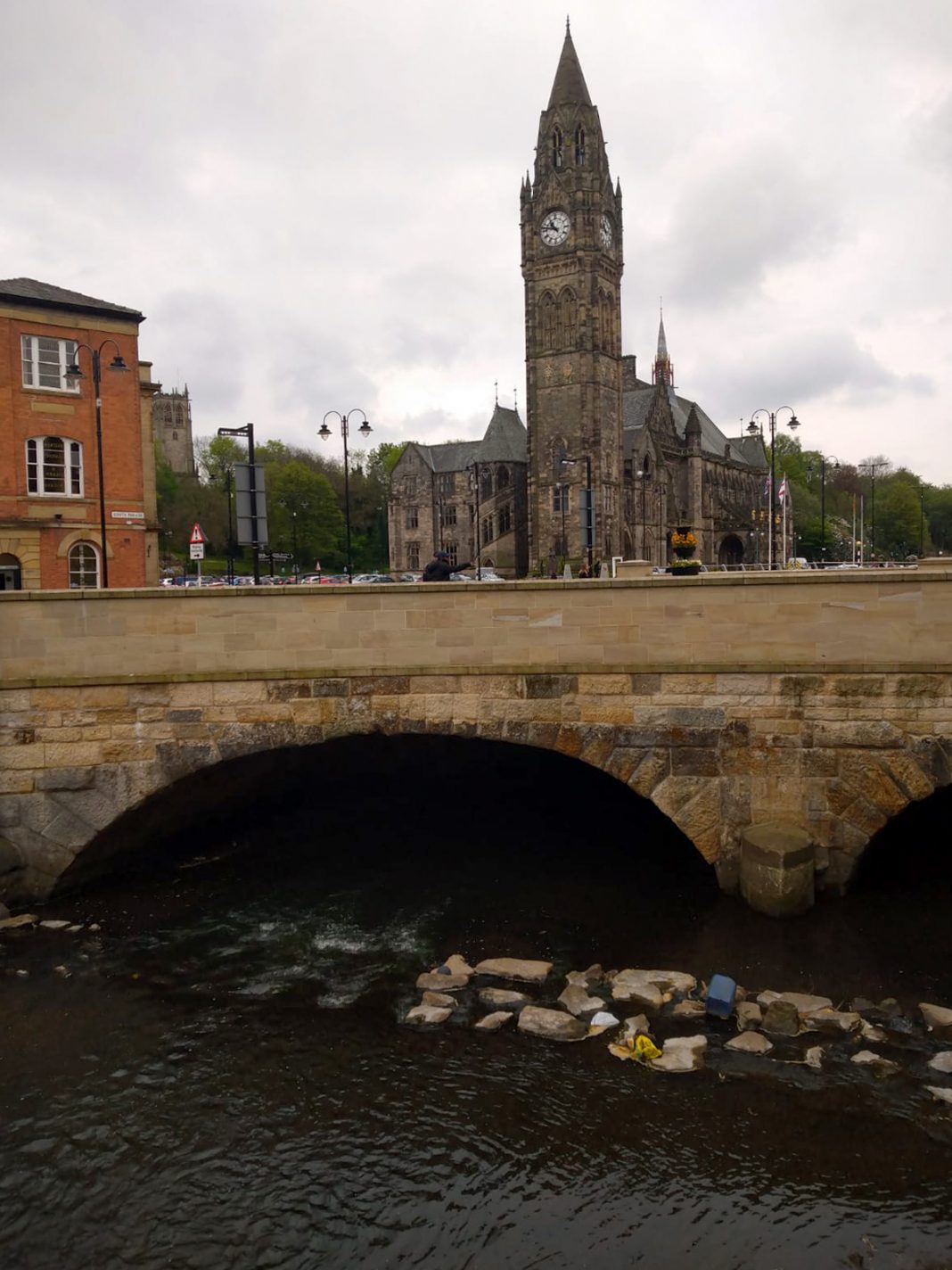 My visit to Rochdale in May 2019 was something of an experiment.  I was trying to see whether this Places to Go column could translate to the small screen as a video, and travelled there via Leeds, Bradford and Hebden Bridge with a talented film-maker Cole Robinson of FilmIt.  We made two movies in two days in Leeds and Rochdale, the latter chosen as somewhere not generally thought of as photogenic but a gritty north west town that actually proved very interesting.

We stayed overnight in the Premier Inn a couple of stops out on the Manchester Metrolink, whose yellow trams give the town a continental flavour.  With my luggage receipts for leaving the cases at the hotel safely in my back pocket we started off on the tram into town.  We had arranged first to meet Bob Bonner of the Greater Manchester Fire Service Museum who let us sit in the cabs of retired engines and blow the horn.  Their oldest exhibit dated from 1741, a full hundred years before the Rochdale Pioneers founded the international Co-operative Movement in the town.  We explored the replica shops over three floors and learned much of the development of the movement over the years. 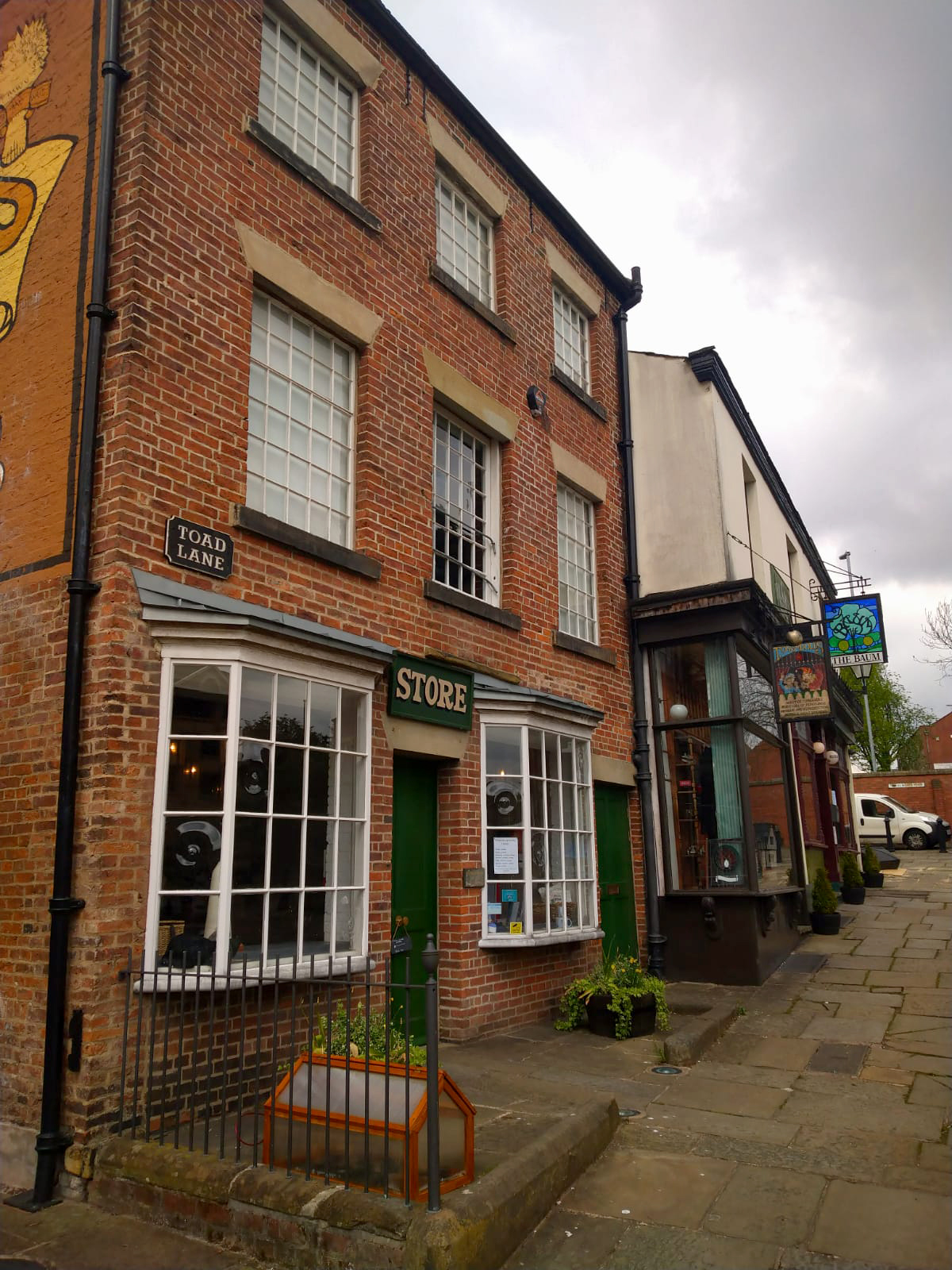 The Touchstone Museum and Art Gallery is a better than average town museum, featuring all sorts of specimens and stories about famous Rochdale people including Quaker politician John Bright, who was MP for Durham in 1843.  His famous “Angel of Death” speech against war in the Crimea was re-used in the Gulf War of the 1990s.  Another was singer Gracie Fields (1898-1979) who was a famous actress and singer, performing on stage and cinema.  Opposite the museum is the grand and Gothic Town Hall which is open on some days for tours, but as we were filming we were only permitted to have a look at the impressive ground floor which can be seen in the video.

We had spotted the campus of the sixth Form College and Hopwood Hall College on the west side of the town, with an attractive training restaurant.  Forget stories of inedible food and students pouring soup into your lap, this was actually a very well presented establishment, and TripAdvisor has it scoring 10th out of 146 restaurants in Rochdale area.  For a training restaurant, that really is a good score.  We enjoyed our lunch and set off for the railway station for our afternoon excursion.

Hollingworth Lake was a nineteenth century pleasure resort, roughly equidistant from Littleborough and Smithy Bridge stations.  We took the train two stops to Littleborough for a quick visit to the Heritage Centre and Cherry Tree café, and then walked down to the lake which is an attractive stretch of open water with various forms of bird life.  Alongside the shore until we reached the turn for Smithy Bridge station, we found – just before the station, and twenty minutes before our train – a charity shop and community café where a well-deserved cake and cup of tea was consumed.  We walked down the hill to Smithy Bridge station and waited for the train.  Noticing a commotion on the platform just as the train arrived, it appeared someone had found our luggage receipts back in the café and ran down to the station to reunite us.  Something had made me turn out the contents of my back pocket.  That saved a lot of explaining back at the Premier Inn where we picked up our bags and headed for the train home.