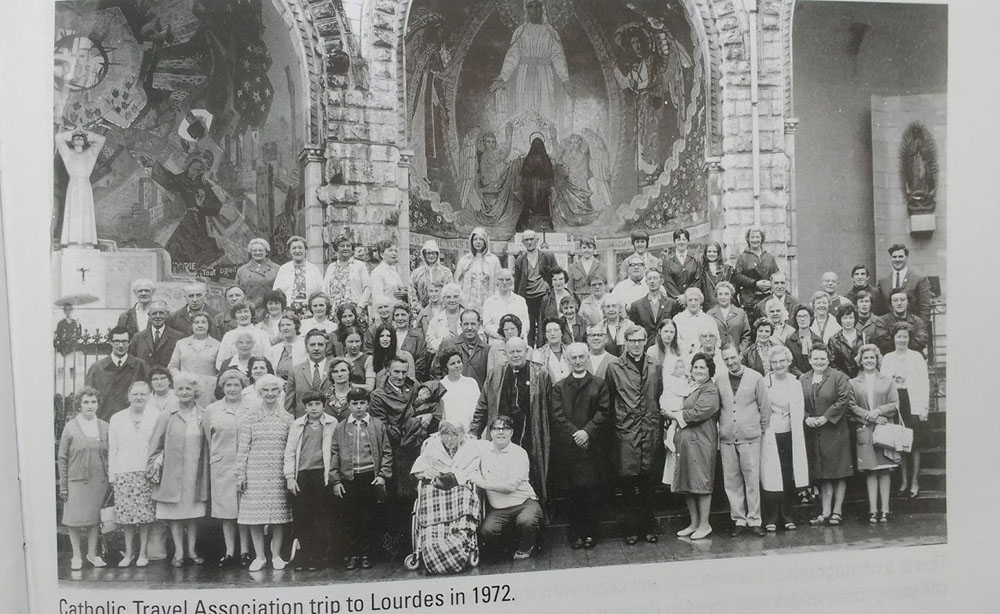 According to the dictionary, ‘A pilgrimage is a journey that someone makes to a place that is very important to them’

As a child the only place of pilgrimage I was remotely familiar with was Lourdes. At the time, I didn’t know it was a town in south western France in the foothills of the Pyrenees, yet after overhearing adults conversations I had notions of it being a magical place where people were cured in a bath. Even growing up with two cousins called Bernadette, choosing it for my confirmation name; and well used to seeing plastic water bottles containing Holy Water in the shape of Our Lady on the mantelpiece in every room in the house, I still knew little – and was quite unsure – of the whole story.

However that all changed, when I saw Jennifer Jones in the film ‘The Song Of Bernadette’ which happened to be on television one Sunday afternoon. Mesmerised I asked my Mam if we could go there on holiday. Having already shelled out for a week at Butlins in Filey, she fobbed me off with the predictable ‘We’ll see’, which was something that was said in our house when there was no chance of it happening.

Still enamoured with the film I resolved that one day I would go, and as I grew up a little, I watched as people I knew, including some members of my family go on the diocesan trip without me. By the time I was fifteen however, the opportunity arose. St Patrick’s Church in Consett were organising a pilgrimage and my brother and I, as well as my school friend, my Uncle Michael and Auntie Rose all had our names down. Both grateful for the chance, funded by our families and benefactors, my friend and I were well aware our Saturday jobs in Woolworths couldn’t provide the cash needed.

When the big day arrived, the bus left from John Street in Consett to take us to Newcastle airport, and as all teenagers do, we hogged the back seat, and tucked into our sandwiches.

We were on an adventure and had no concept of what to expect.

The aeroplane was full of pilgrims, excited at the thought of travelling to a place where miracles were proclaimed. For us it was a travel adventure. I had never left England before, so this was my first plane journey and the anticipation was evident. Among our holiday clothes, we had in fact packed mantillas, just in case head covering was mandatory and a swimming costume to be on the safe side in the baths – which on reflection were not entirely as we expected, and bore no resemblance to the ones we knew in Consett.
However, on arriving in Lourdes and settling into the hotel, after dinner we prepared for the torchlight procession.

Carrying candles with prayer printed paper protective cups, we drank in the atmosphere of pilgrimage and the extent of belief displayed; as the Rosary and Ave Maria rang out loudly in numerous languages throughout the procession, as it triumphantly wound it’s way, lighting up the sky.

An hour and a half later with the candles extinguished, the eligible older members of our group retreated to the Jeanne d’Arc cafe on the bridge to share stories, food and drinks, while we explored the numerous souvenir shops packed with rosary beads, statues and various containers to fill with water from the spring that Bernadette found in 1858.

The days flew by, and in between rosaries and processions, we visited Bernadette’s house, the Grotto, churches, museums and the healing baths – all memorable and moving.

All too soon, alongside heavy cases packed with Lourdes water, we said an emotional goodbye and made our way to the airport. The cabin buzzed with chatter as we told stories of our encounters.

Happily laughing and enjoying ourselves, my friend and I both raised our eyebrows when we heard the rosary being recited from the front of the plane; both naively commenting, ‘Haven’t we done enough praying for one week!’

However when the Spanish City at Whitley Bay came into view three times, and realising the plane was circling, we hastily joined in; as there was a gentle uneasiness that things weren’t quite right.

Much later than expected, when the plane landed safely, we were greeted by fire engines, ambulances with their back doors open, and the sound of clapping, as our anxious families showed their relief as they tearfully welcomed us back.

That evening, over a cup of tea, my Mam and Dad said that they’d been told the plane couldn’t land as a light in the flight deck was telling the pilots that the wheels were locked.

So, how we got home, was another miracle!