A proposed energy recovery facility that could generate low-carbon heat and power for Consett residents by responsibly re-using 60,000 tonnes of locally-produced non-hazardous, non-recyclable RDF waste (otherwise destined for landfill), has been proposed for Hownsgill Industrial Estate.

Subject to planning permission, Hownsgill Energy Centre will create approximately 70 jobs both operationally, as part of the construction process, and thereafter in the wider supply chain, as well as help attract multi-million pound investment and new development projects to directly benefit the community.

It will specify proven, state-of-the-art technologies, and advanced filtration and cleaning systems used in world-leading facilities elsewhere, to fully ensure the extremely safe production of renewable energy, powering the equivalent of 8,000 homes without any health and safety risks to the general public.

An environmental permit will also be sought and required in order to operate, ensuring the strict compliance with the highest regulatory requirements and standards set out.

However, and unfortunately, an abundance of misleading and inaccurate information being circulated by opposition groups online and via promotional ‘against’ literature, has distorted many of the truths surrounding the plans, in particular those regarding emissions and health. 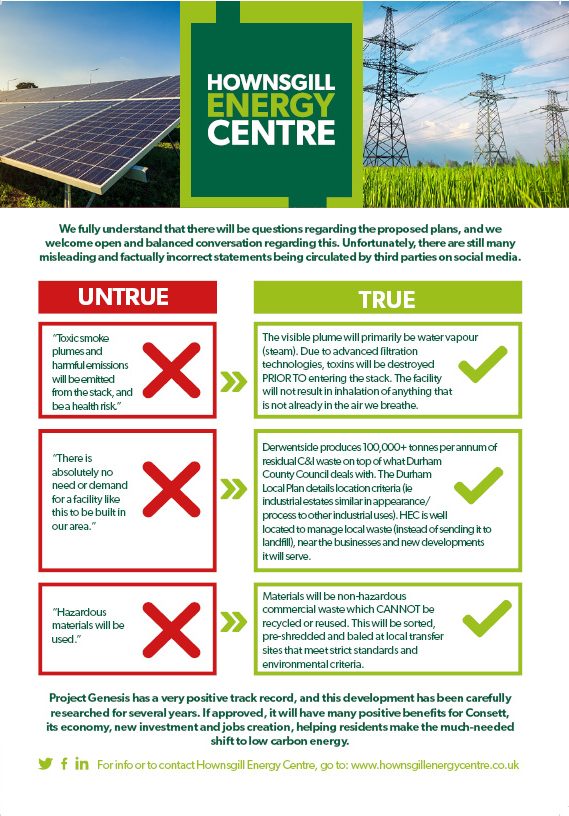 Furthermore, invitations sent out by Hownsgill Energy Centre (Project Genesis Ltd) to some network spokespeople, officials and community representatives in order to fully engage and provide the opportunity for open and balanced conversations, have also been declined.

A spokesperson explained, “We totally understand that the community will have questions regarding this proposal, and we very much welcome that discussion, we always have. As well as other activities, we recently held an online consultation in conjunction with local Delves Lane Councillors, which was very productive. However, it was also disappointing to learn and see that many of those vocally active in their opposition, were also refusing to engage with us too.

“Our plans are not for some ‘monster, toxic plume incinerator’ as it is being incorrectly labelled, but instead for a very safe, small-scale energy facility that will be in-keeping with the site it is proposed for (ie an industrial park earmarked for future industrial development).

It is very much needed on a local basis, not only to reduce the waste currently going to landfill, but also to help improve the local infrastructure given that there is now a much higher demand on power supplies from the likes of electric vehicles and home charging points. Without significant network investment, improvements and facilities like Hownsgill, the network simply cannot cope.

“This isn’t a spontaneous idea that we have just come up with. We have carefully planned, researched and assessed the need for low carbon power in Consett over many years. Simply put, we, as a community, cannot keep turning a blind eye to non-recyclable, non-hazardous materials produced in our very own area, some of which from household improvement skip waste, being buried for years to come for our children to deal with.

“This energy facility is an extremely safe proposition that carries no health risks to local residents. What will be emitted from the stack will be primarily water vapour and harmless carbon dioxide, and will not result in the inhalation of anything that is not already present in the air we breathe.”

Durham County Council is due to hold a planning meeting in September (date tbc). More details regarding the plans and Hownsgill Energy Centre can be found at