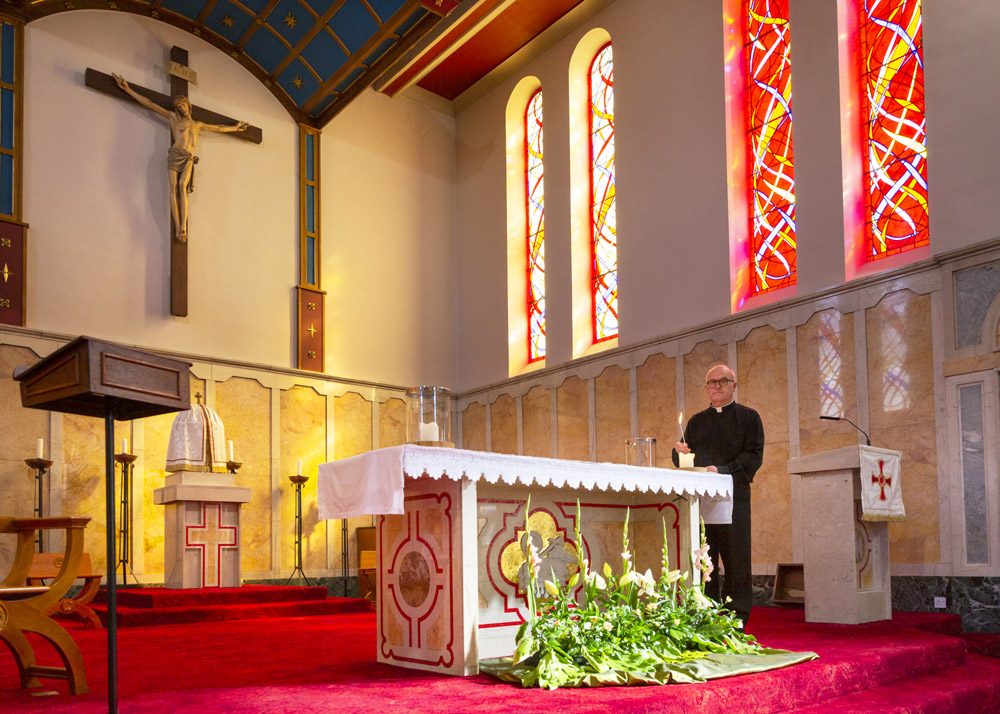 This month we are showcasing Churches and Religion across our area as they have all been affected by restrictions and closures during the various stages of Government restrictions. If you wish to be part of the project or have suggestions, please contact us at: consettcoronaphoto@gmail.com

The Consett Corona Photo Project started in March 2020 and has continued to document the effects of Covid-19 upon the people, volunteer groups and businesses of Consett area. All images have been photographed within the Government guidelines. We are currently holding our first exhibition at Willow Burn Hospice Garden area and arranging further exhibitions in the area, these have and will be announced on our Facebook page – https://www.facebook.com/ConsettCoronaPhotoProject 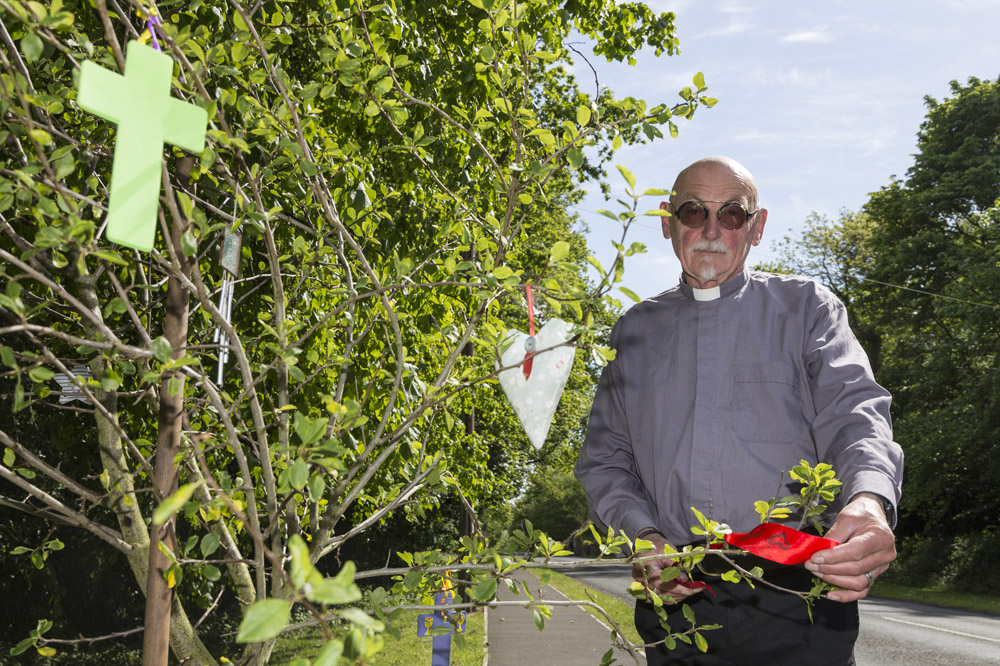 1. Churches were closed during the first Lockdown, which not only prevented the congregation but also the Vicars from entering. In May 2020 we photographed Canon Geoff Smith of St John’s Church Shotley, Snods Edge. No one could enter the Church and the Canon had to rely on Telephone contact with his congregation as Wi-Fi was not always fast enough for Zoom meeting. He had erected tree outside the gates of the church so that rural members of his congregation could leave messages or dedications on it for inclusion in the telephone service – (Image: George Ledger) 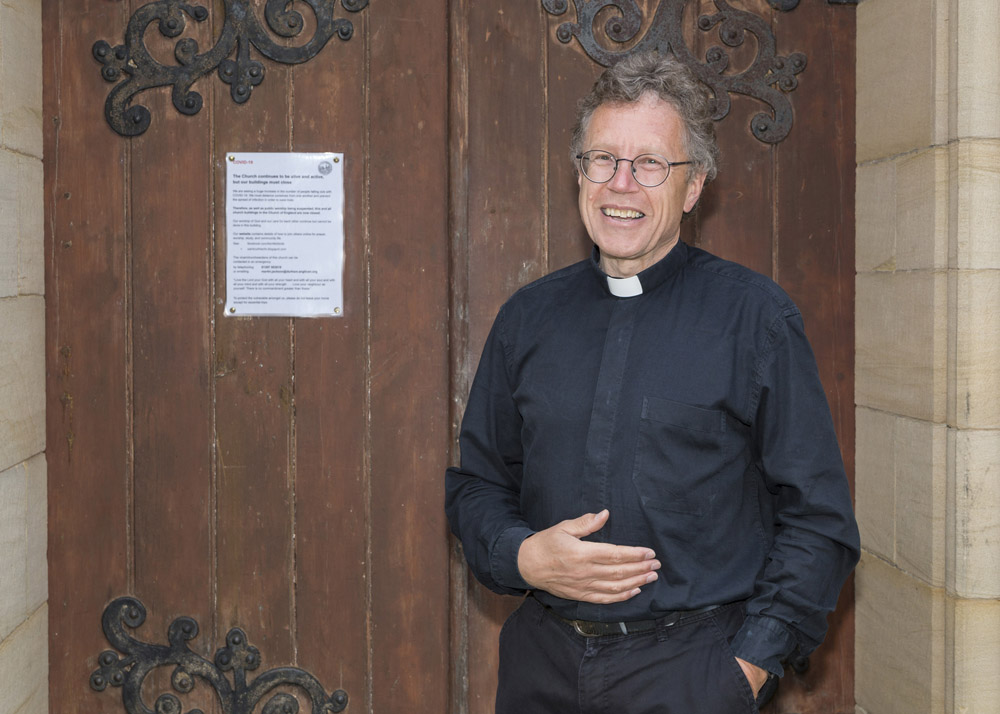 2. We also visited and photographed The Revd. Martin Jackson. St. Cuthbert’s Church, Benfieldside during the Lockdown in May 2020. His Churches at Benfieldside and Castleside were also closed but he used Zoom meetings and YouTube recordings to allow his congregation to see and take part in services. – (Image: George Ledger)

3. In September 2020 during Tier 3 restrictions, we visited Father John Bagnall, St Patrick ’s Church in Consett. The church was open, but numbers were greatly restricted. Father Bagnall had introduced a ‘one way system’ around the church, taped off 3 in 4 rows of pews. Signage had also been placed around the Church to remind the congregation what they could not do during Tier 3 restrictions. – (Image: George Ledger) 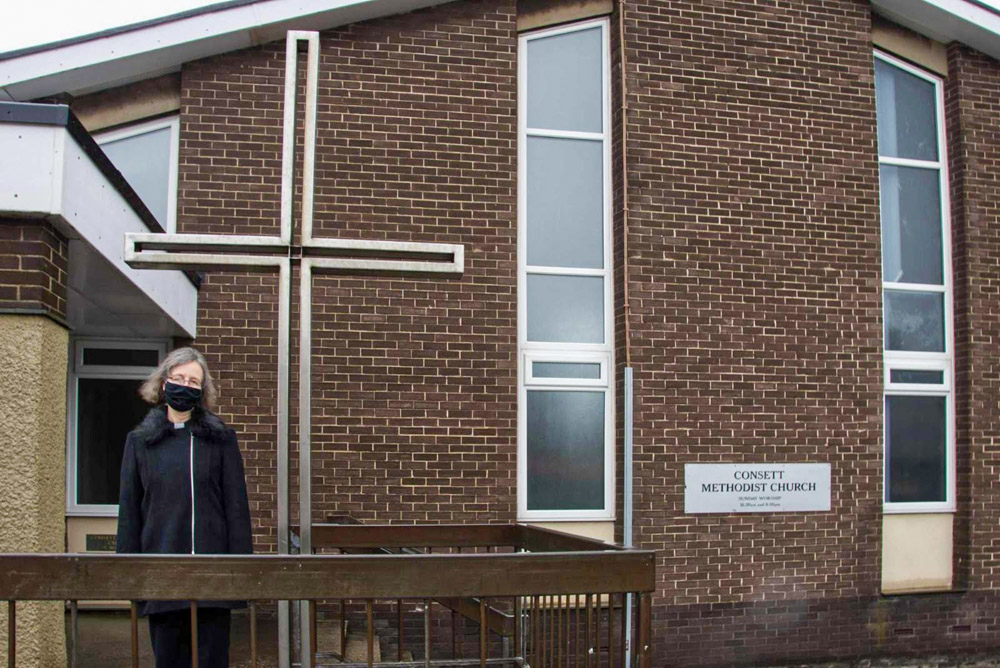 4. In February we photographed The Rev. Anne Jefferey, Minister for the Consett Methodists, who had all her churches closed but continued to look after her congregation as effectively as she could. It’s not easy when you can’t see anyone, expect at a distance, but hopefully this may change soon as we head towards the end of the 3rd Lockdown. – (Image: Chris Bruce) 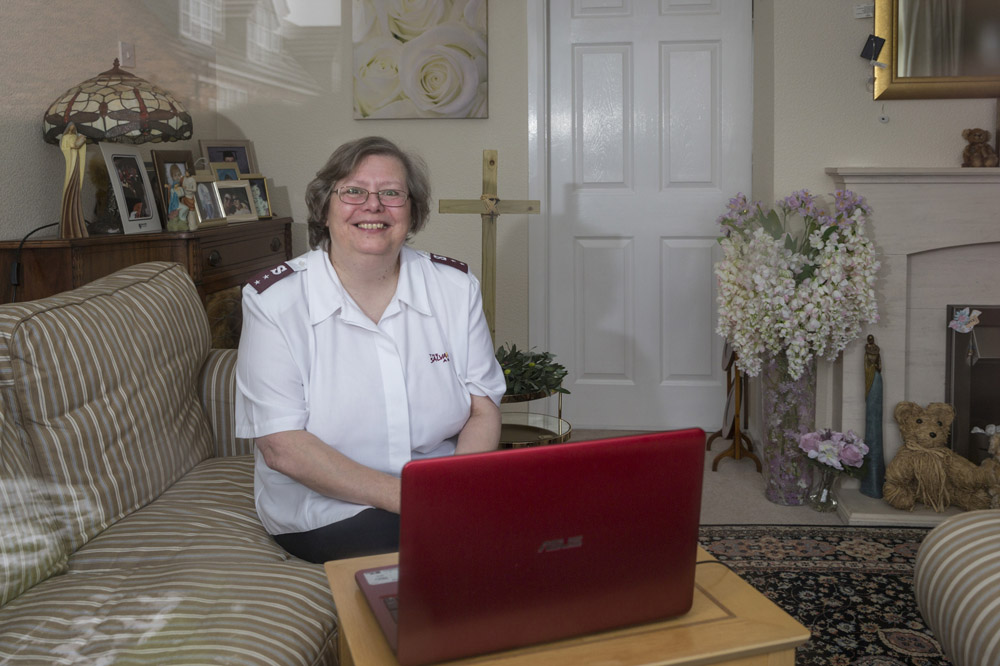 5. Also in February we captured Amanda Smethurst, the Salvation Army Captain from Leadgate. She had remained in touch with her congregation by using Zoom meetings, on- line services, weekly newsletters and personal telephone calls and visits. This did not stop the excellent work that they have been doing in the community including regular Food collections for the Consett Food Bank and collecting used stamps for the RNIB. More recently the Army Hall reopened fully to the congregation and hopefully in the coming weeks once more the sound of the Army Band and Worship Group singers will be heard. – (Image: George Ledger) 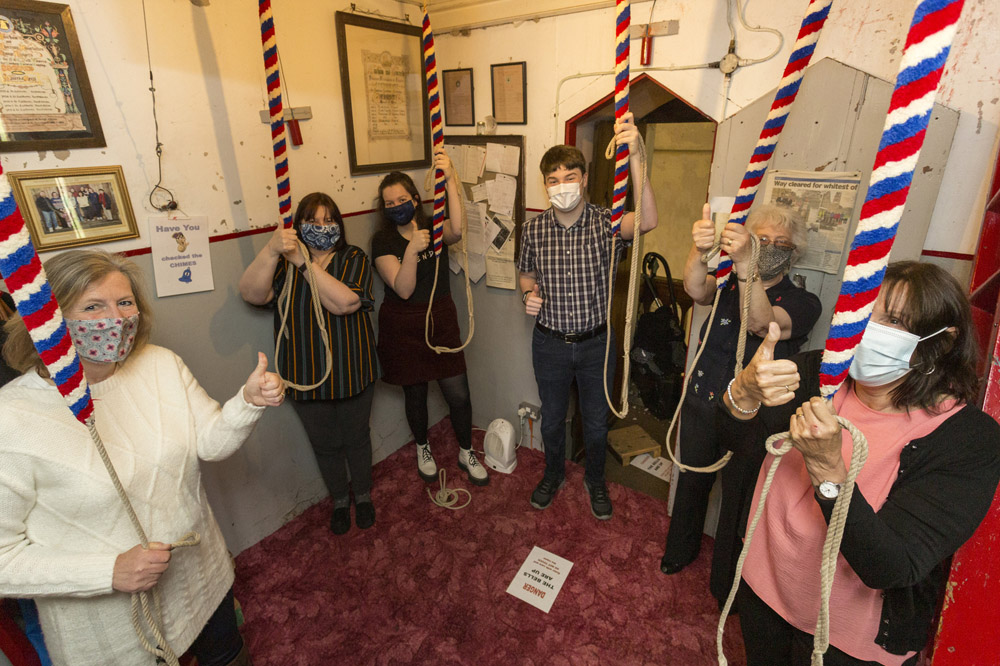 6. On Sunday 23rd May, Church goers and the general public heard the sound of Church bells for the first time in full at St. Cuthbert’s Church, Benfieldside. They had been stopped at the start of lockdown and except for the occasional solo bell ringing they had stayed quiet for over a year. St Cuthbert’s recommenced ringing all 6 bells together again ahead of the church service on Sunday 23rd May as they benefitted from having 2 families with 3 ringers from each which meant that social distancing was easier in the very confined area of the bell tower. St Cuthbert’s also benefitted from having particularly good ventilation with two opening windows, a balcony door opening into the body of the church and the staircase providing a through draft of fresh air. (Image: George Ledger) 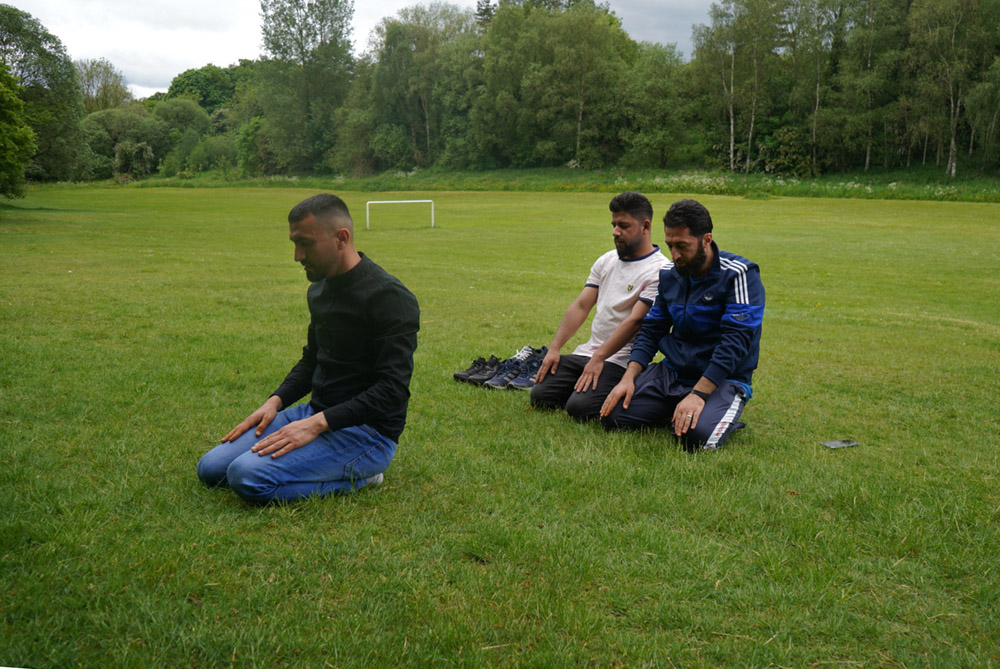 7. During lockdown a lot of Muslims were unable to attend mosque due to closure and travel restrictions. However, to devout Muslims this could not disrupts their routine of praying 5 times a day, they can pray anywhere so long as it is clean and there are facilities to wash their hands and feet. Some have been praying at home, at work and even when they are out and about. The staff at Pizza Corner in Stanley have worked all through the pandemic, however by May 2021 they could resume their get together and outdoor BBQs. They all bring meat, salad and bread and contribute to preparing and cooking it then chat and catch up before cleaning the area thoroughly and whilst there they could also pray. (Image: Debbie Todd) 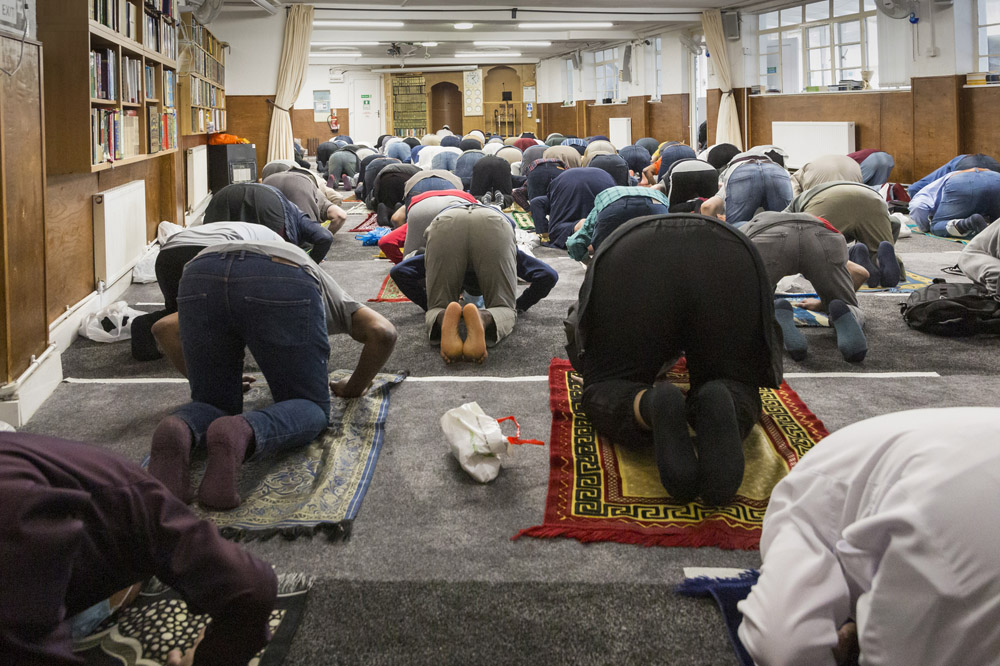 8. Mark Jackson, from Crookhall converted to Islam many years ago, now known as Khadim he lives in Newcastle but regularly returns to Consett to see his family and friends. Newcastle’s Central Mosque plays a central part in the Islamic communities of our area, not only providing a place for prayer but also in the collection and distribution of food aid to those in need. Prayer is a large part of a Muslim’s day with ‘Salat’ or obligatory prayers performed five times each day. However, many Muslims cannot get to Newcastle each day to pray because of work, but they all try and make sure they can attend for the most important prayer of the week ‘Jumah,’or Friday prayers. Once the mosque was allowed to reopen, numbers were agreed with the Council, and restricted to about 150, because normally there would be 500+ people in attendance. Hand sanitising and face coverings are mandatory, and the hall is marked with lines where worshippers can place their prayer mats. Shoes must be removed before entering and during Covid they are now placed in carrier bags and kept by the person throughout their visit. (Image: George Ledger)