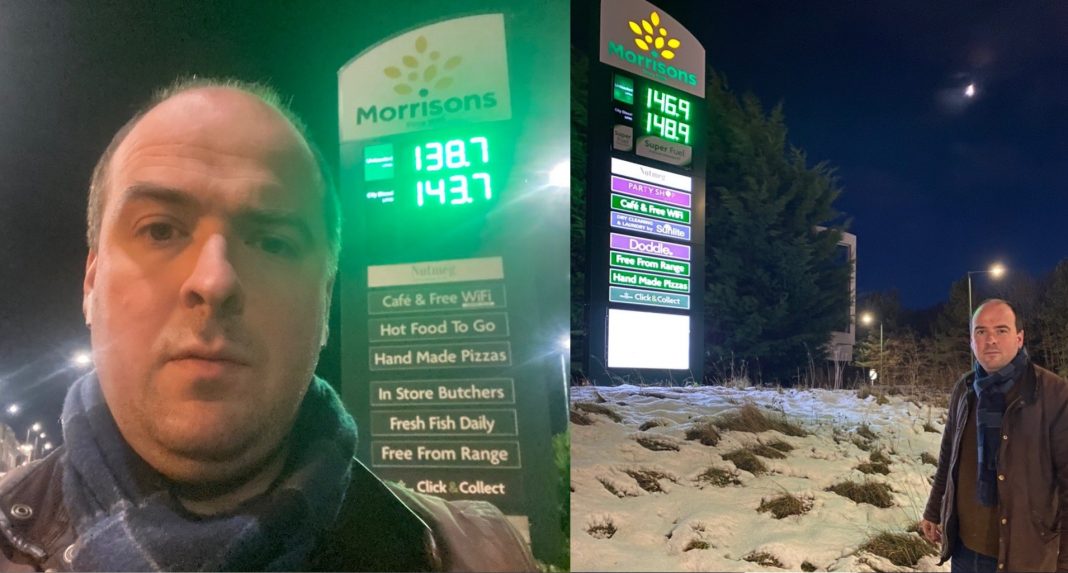 Richard Holden, MP for North West Durham, has demanded that Supermarkets address the unfair differences in petrol and diesel prices between the stations they run in Consett and neighbouring Bishop Auckland.

Morrisons has slightly dropped their prices, but the MP says more needs to be done and calls on others to follow.

Constituents reached out to local MP, Richard Holden, to highlight a more than 10p fuel price difference between petrol stations in Consett and Bishop Auckland – despite being run by the same supermarket chain and just 18 miles apart. Both Morrisons and Tesco charge higher prices on both petrol and diesel in Consett than in Bishop Auckland, costing customers up to £5 more to fill up in Consett.

Richard Holden MP first wrote to the supermarkets on the issue in February 2020 but did not receive a response. He raised the matter again on Twitter last week, demanding an explanation from both Morrison’s and Tesco. Yesterday he took to the House of Commons to call out their unfair practice.

Firstly, raising the issue with the Permanent Secretary at the Business and Energy Department (BEIS) during a meeting of the Public Accounts Committee. The Permanent Secretary stated that an any price collusion would be illegal and treated incredibly seriously by the Competition and Markets Authority and that she will ensure a team at BEIS looks into the matter.

Consett & Bishop Auckland are 18 miles apart. Yet the fuel is almost 10p a litre cheaper in one than the other

Can you give a reasonable explanation why?

Drop me an email, happy to chat over the weekend.

And secondly, Richard raised his question in the Commons Chamber and the Minister of State Business, Energy and Clean Growth, Greg Hands MP, has agreed to meet with Richard at the earliest possible opportunity to discuss the petrol price issue.

Since his intervention, Morrisons have emailed Richard and have dropped their petrol and diesel prices by 1p each at their Consett site. However, they remain very significantly above prices in Bishop Auckland. Tesco have not yet responded.

“My constituents are fed up with being screwed over by large supermarkets ripping them off with significant differences in the price of petrol between Consett and Bishop Auckland – despite pumps being only 18 miles apart.

“That is why I have called on both Morrisons and Tesco to amend this unfair practice.

“I appreciate that Morrison’s have dropped their price difference by 1p, but much more needs to be done, and I look forward to meeting with the Minister of State for Business, Energy and Clean Growth to discuss just what can be done very soon.”

“I will always do whatever it takes to stand up for my constituents against unfair practices.”