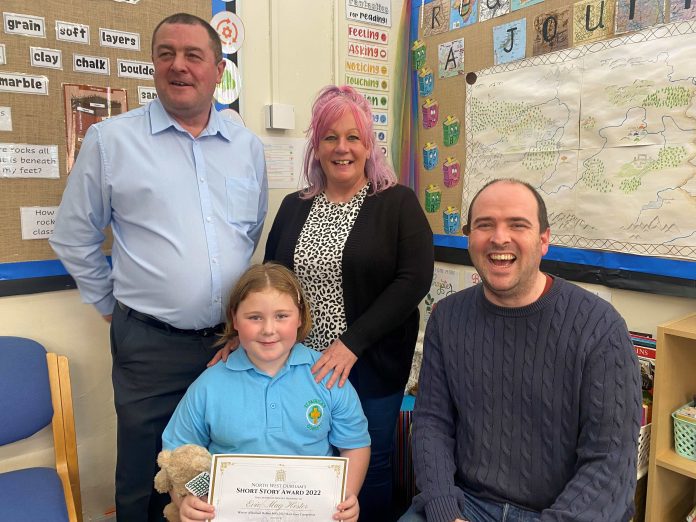 Richard Holden MP’s Short Story competition winner, Evie-May, was awarded with a certificate and a teddy bear from the House of Commons for her brilliantly creative story. Her parents, teachers, and classmates were very proud of her.

This is the second year in a row that Richard Holden MP has run his ‘Short Story’ competition for children of primary school age in North West Durham. This year, his Short Story Award had the following theme: write about an animal in your life as if you were that animal. With scores of entries up to 300 words, choosing a winner was very difficult but Evie-May’s story really stood out.

In a school hall packed with nervous anticipation, Evie-May sat unaware of the presence of her parents and a few special guests. Local MP, Richard Holden, and Evie-May’s parents, John and Clare, had arrived that afternoon in order to celebrate her winning the Short Story award.

After receiving the award from Mr Holden, Evie-May was visibly shocked but very happy. Her story followed a first-person account of a typical day in her Dog’s (Honey’s) life and made Richard’s team laugh out loud. It is a sweet story and Evie-May may certainly be a name we see in the future on the front of her first book.

An extract from Evie-May’s piece is as follows, ‘Lexi is my younger sister although she doesn’t look anything like me, I’m an apricot cockapoo and she is a white and brown cocker spaniel’ says Honey.

“So many brilliant submissions were sent to me as part of my Short Story Award, the children across North West Durham have brilliant imaginations. From the adventures of cats and dogs, to talking tortoises, the stories were very funny!”

“I spent about half an hour doing it”, which is an incredible achievement.

“She spends a lot of time being creative and comes up with some cracking stories. I bought her all the old Disney films, and she loved the ones with animals in. I am very proud”