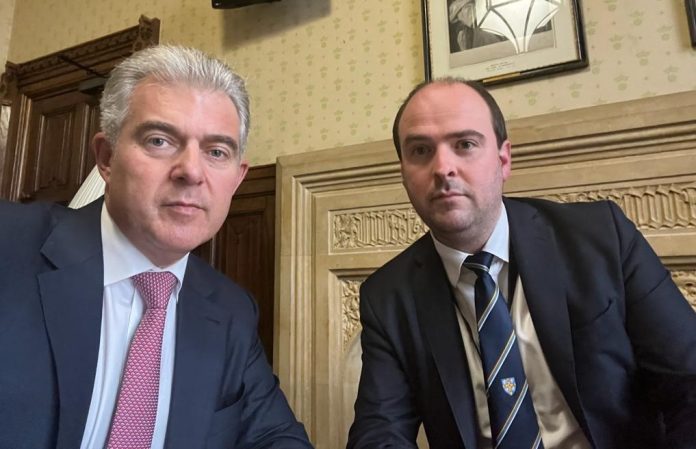 Richard Holden MP has been fighting against the proposal to develop Highfield House in Consett into a 16-bed site for high-risk offenders. This week, Richard met the new Justice Secretary and told him how inappropriate the site would be. The Secretary then committed to review the situation with his department.

As soon as an opportunity arose in the House of Commons, North West Durham MP Richard Holden stood up and asked the Justice Minister about the Highfield House proposals to make the site a high-risk offenders centre. The Minister then agreed to organise a meeting on the same day with the most senior member of Government in the Department for Justice, so Richard could state his concerns.

Richard has consistently campaigned and held the MoJ to account on this issue over the last year. He has met many Ministers and corresponded with hundreds of concerned local people. At the meeting, the new Secretary of State for Justice understood fully Richard’s and the Consett community’s concerns – and agreed to speak to his department and write back to Richard as soon as possible.

At the meeting and throughout his time as MP, Richard has made it clear that here in North West Durham, we have three main concerns:

1)       Highfield House is in the centre of a densely populated residential area.

2)       The site is also yards from numerous educational facilities, including Delta North School and Derwentside College.

3)       Furthermore, the site is also within a stone’s throw of important youth community facilities including the Consett Scout Group HQ and Consett Air Cadets and Durham Army Cadets.

Everyone wants those who have served their sentences to be able to rebuild their lives. However, putting high risk offenders who are out on probation or licence right in the heart of a small town near so many important local facilities would be totally inappropriate.

Richard Holden MP has made clear the views of himself and the local community. Any facility cannot be at Highfield House, which is totally unsuitable and must be nearer to the specialist support that such serious convicted offenders require.

“It is very concerning that the Highfield House site in Consett is even being proposed by the MoJ. It is completely inappropriate and placed amongst the sites of children’s community groups.

“Quite rightly, my North West Durham constituents, including voluntary organisations like the Scout Groups and Army Cadets, have got in touch and expressed their concern with the siting of such a facility so close to them.

“This is why I raised these concerns once again in the House of Commons – and got a meeting with the Secretary of State that same day. The Justice Secretary was very understanding and alive to my concerns and what I want to see now is sense prevail and I’ll keep campaigning until it’s sorted.”