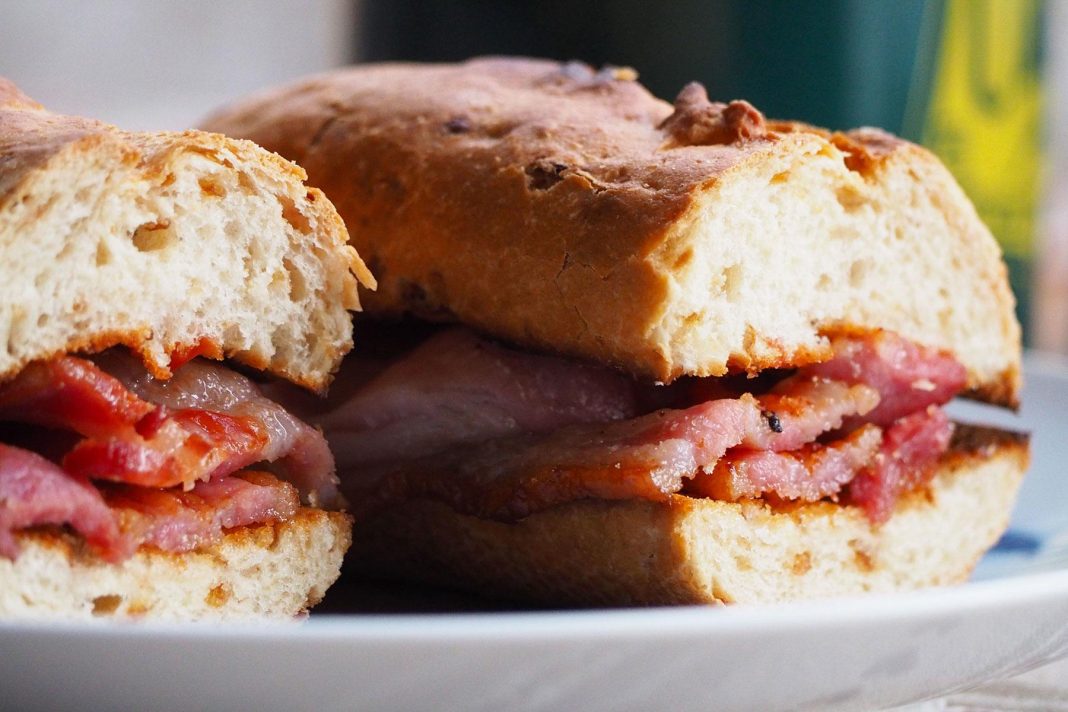 Meals were usually eaten at the kitchen table which was covered with a shiny oil-cloth.

They consisted of breakfast, lunch and tea. There wasn’t any snacking in between meals apart from possibly a piece of fruit or a glass of milk.

Eating out of doors was simply not done apart from picnics, ice-cream or fish and chips which were wrapped in newspaper and eaten with greasy fingers or a little wooden spatula – no polystyrene trays or plastic forks!

Breakfast was often a bowl of porridge with milk and treacle which was artistically trailed from a spoon in the shape of one’s own initials. Sometimes we had a soft boiled egg and Daddy used to cut off the top so we could dip in our soldiers of buttered bread.

Occasionally we had kippers – done in a frying pan to make the skin nice and crispy. I loved the taste of them but hated the bones and spent ages trying to remove them before sprinkling them with vinegar, clamping them between two thick slices of bread and then swallowing them down with big gulps of tea. Another favourite was ‘eggy bread’, especially when it was served up with a rasher or two of bacon.

Lunch was the main meal of the day. Monday was often rissoles made from left-over meat from the weekend joint. It was broth on Tuesday, a tasty tomato coloured mix of vegetables, pulses and bits of shredded meat which was often bulked out with ‘spuds’ or dumplings. It was wholesome and very filling.

Yellowfish (smoked haddock) was my favourite, especially the flavoursome juice which I soaked up with slices of bread.

On special occasions, we had roast chicken with home-made stuffing and we considered it a great treat – – not like it is now with chicken dished up in a hundred and one different ways with exotic sauces, nearly every day of the week. Any remaining meat was picked from the carcass, which was boiled up to make stock and the end result was a bowlful of tasty soup.

Like most households, very little was wasted. We had rabbit stew from time to time and I remember trying to skin one on the draining board in the scullery. I had a struggle with it and did not enjoy the task although the meal itself was sweet and tasty but I didn’t care for the bones. Tea was usually just jam and bread and cake with a pot of tea made with real tea-leaves as tea-bags were not available. Grandma had a metal
cylinder with a chain which one filled with the leaves and hung in a pot of hot water but we didn’t use it very much. ‘Just a gimmick!’, as my father used to say.

Puddings consisted of rice ‘pud’ with lovely brown skin, baked apple or poached pear with custard, jelly or blancmange with tinned fruit and a steamed pudding in winter. My favourite was treacle but ‘spotted dick’ and chocolate also ‘went down well’.

When I look back, I think we were fortunate to be so well fed. It was plain, simple cooking but it did provide a well-balanced diet and was very nourishing.

I have a few old recipe books belonging to elderly relatives. They make you realise how inventive they were with just a few basic ingredients in those days and also include money-saving household hints and medicinal concoctions.

Daddy was a great believer in Monastery Herbs which were mixed with a small amount of warm water to make an evil tasting, green liquid which was supposed to act as a tonic and keep us internally ‘toned’ but it was more pleasant to follow Grandpa’s advice of chewing liquorice to ‘keep you ‘regular’.

We were given rose-hip syrup (hands up all the school kids that gathered the red berries to make a bit of extra pocket-money), a spoonful of malty Virol and cod liver oil emulsion to ward off colds and make us grow ‘big and strong’.

Believe it or not, I loved cod liver oil. Strange child! Last, but not least it, was horlicks or hot chocolate for a good night’s sleep – unless you were one of the dedicated ‘ovaltinees’!