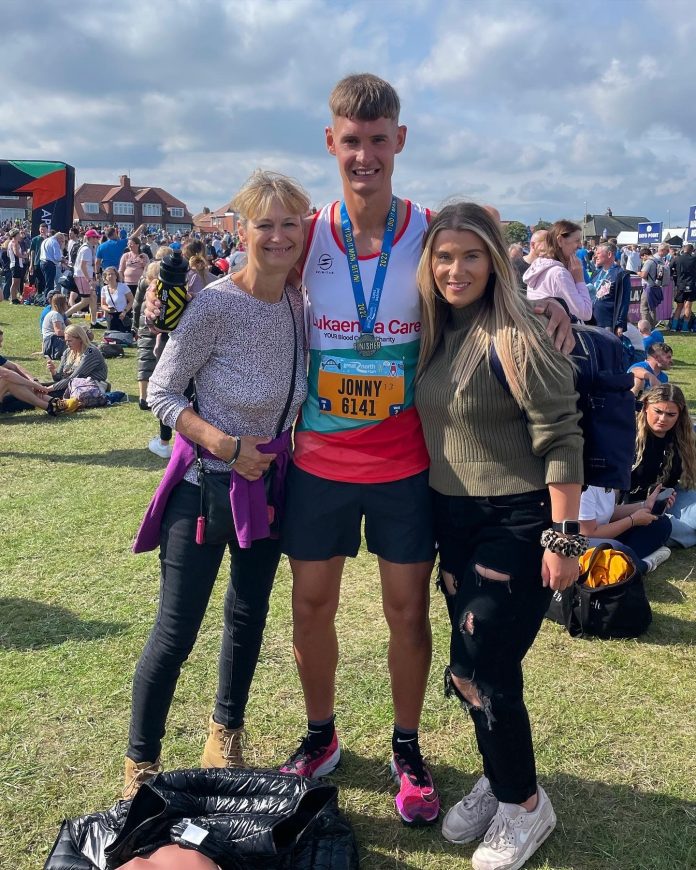 Jonny Maddison, 28, from Houghton-le-Spring, County Durham, is an ex-professional footballer who ran the Great North Run at the weekend to raise vital funds for Leukaemia Care. Jonny raced this weekend at the event in Newcastle for his Mam, Karen, who was diagnosed with leukaemia many years ago, and managed to raise £750.

He said: “She is such a strong woman. When my Mum was diagnosed many years ago, we were both still pretty young and unaware of the seriousness of the situation due to the constant positivity and smiling, happy, loving, selflessness nature of my mam. She never showed weakness to us, always strength, and sometimes I wish she would open up to us more to help share some of her problems – something I am now trying with her now I am older and more aware. Since I’ve moved out the family home, we love to meet up for a coffee and chat about life and the world – it helps us both so much.

“My mam underwent treatment around 10 years ago when I was still playing football, which was exceptionally tough on the family for obvious reasons, not to mention I was living 300+ miles away in Crawley at the time. During that period, she mentioned Leukaemia Care to be in great aid for herself and she spoke very well of the charity and how supportive they were. For the next couple of years, things were trying to be back to ‘normal’ as best they could be and things were going well, however recently I fear that my mam may require further treatment due to the leukaemia returning. Again, she always puts on this exceptionally brave and positive face and I have to constantly ask her how hospital trips were etc. as she just sometimes wouldn’t say – as she never wants myself or my brother to worry, but we always do. Leukaemia has always been in my life for as long as I can remember, and anything I can do to help others as well as my mam, I would try to.

As an ex professional footballer of over 10 years he recently had a career change due to the aftermath of the covid-19 pandemic. He began his career at Sunderland, before joining Crawley Town in May 2013 following a spell on loan and played for Port Vale up until June 2020.

“As a result of the pandemic and lack of opportunity, consequently, I fell out of the professional game and had to look elsewhere for work. Currently, I am coaching youngsters at Middlesbrough FC Academy and thoroughly enjoying being back in football after two years out. During the two years out over the pandemic, I was working as an operations manager for Amazon which was a massive change and culture shock for myself being in the ‘real world’ for the first time in my life at the age of 26. It however made me appreciate the little things in life; being closer to home, seeing parents, siblings and grandparents more often and being able to attend social events has really been a big thing. The positives of being out of football were my girlfriend and I also managed to get a dog who is a cocker spaniel called Pedro who we have had for around two years, and we can’t imagine our lives without.

“Fitness has always been a significant part of my life from such a young age, and since being away from that ‘competitive environment’ it has been something I have longed for to sink my teeth into something new – of which the last few months running has allowed me to do. I always enjoy a challenge, whatever it may be. In 2022 I made a promise to do things that for so many years football did not allow me to do, and live life to the fullest. In February, I went skiing in France for the first time in my life and in April, myself and a few friends completed the National 3 Peaks Challenge in under 24 hours for If U Care Share Foundation.

“Along with these events I was also not able to the GNR as a player due to contractual reasons, so I thought it be the perfect opportunity to do it now, along with the fact of raising some money for a brilliant cause. The fact I managed to raise £750 for the charity was amazing – especially with the current financial climate. It made the run feel even more special when I completed it – close to tears even!

At the event he was cheered on by his family who are super important to him.

“My mam Karen, Dad Tim and girlfriend Abbie go everywhere I do and support me with everything I want to do. They’re amazing. I just want to make them proud in everything I do. I wouldn’t be where I am in my life today if it wasn’t for them – so I thought I should give something back to support a charity that did so much to support my Mum a few years back during her chemotherapy treatment. That period was exceptionally hard for myself only being 18 years of age and having to leave my mum on weekends whilst she was having treatment to go and travel down south to pursue my footballing career – something that hasn’t hit me as hard until recently upon reflecting my career. It sometimes makes me feel selfish that I did that, and again is another reason why I decided to run the GNR for Leukaemia Care to give something back. My girlfriend Abbie does everything for me whilst I have been spending hours training up to the race – preparing food, running me a bath when I’ve been coming in from work, walking the dog, doing the dishes – all the little things that add up to make a big difference. She has also been amazing for me.

He said: “I think overall the race went very well for myself – I achieved my personal best half marathon time of 1:24:17, surpassing my old time by 6:30mins so I was very happy all the hard work and training had paid off.”

Running the race on the first weekend after the Queen passed, he said: “The Great Run did very well in observing a minutes silence before the race along with the national anthem being played before the start. The atmosphere was still very positive and lively, but still very respectful. I was relived the race was still on due to the months of training I had done but collectively I think it was a good decision due to the amount of money that has been raised “