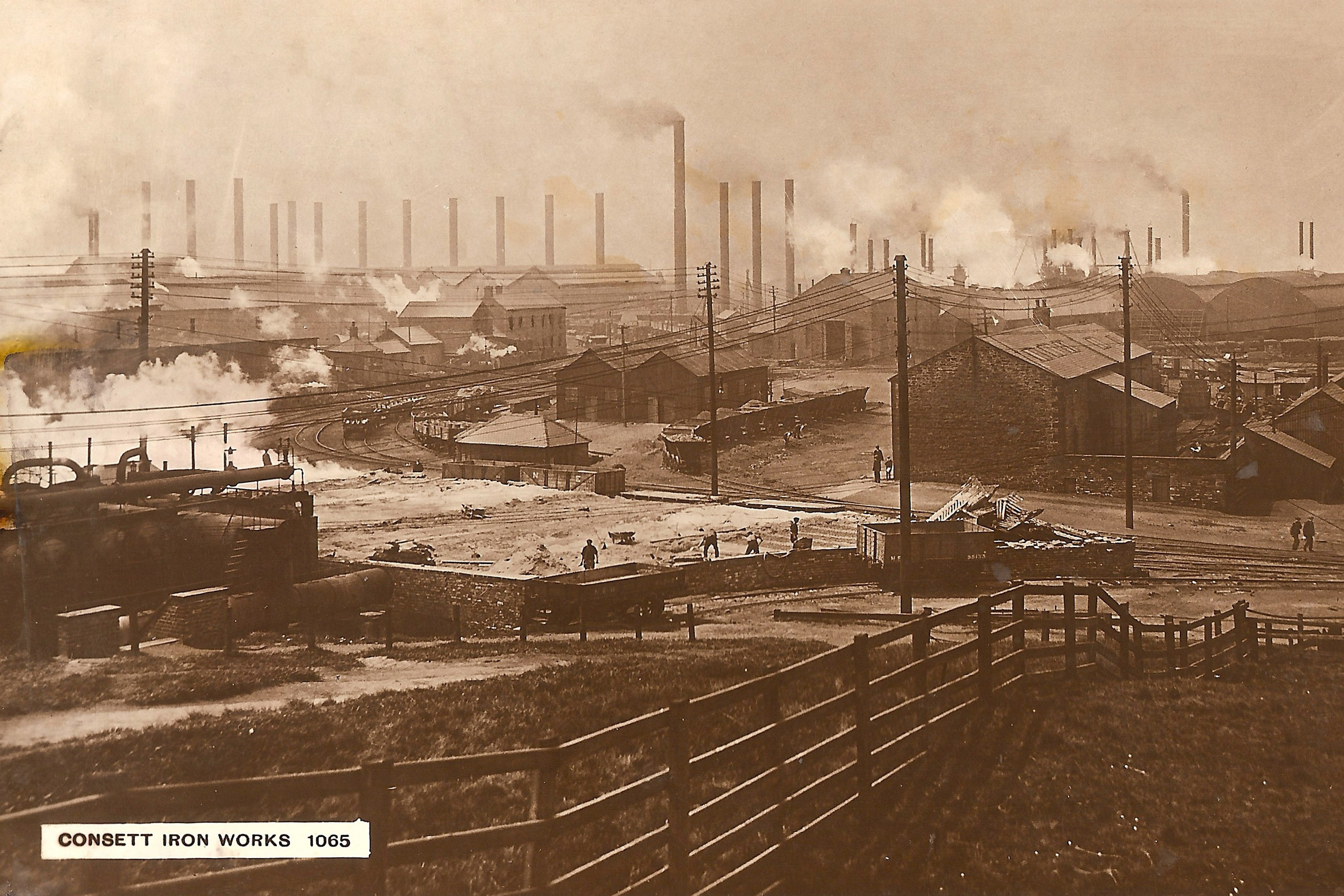 The Derwent Iron Company, the original owners of the Consett Iron Works, realised from the very start that they would need to amass a better class of workmen. In order to

do this they began to put in place plans for a new town, with suitable housing, businesses and also churches to provide for the peoples spiritual well being. Schools and reading rooms were also supplied at a small fee to the workforce which the company then matched. The company was set up in 1841 and by 1847 had already grown to become the biggest of its kind in the kingdom.  At that time it consisted of 14 Blast Furnaces, two mills capable of puddling, hammering and rolling 900 tonnes of Iron bar per week; 12 refineries for refining and founding; 22 steam engines to turn machinery and 35 coal and ironstone pits to supply the material.  Although the Coal resources flourished the ironstone ran out rapidly. The company began to source from further a field, firstly from Cleveland and then Whitby.

The Company had suffered disruption from early strikes, labour disputes and off course the sectarian problems which prompted the Battle of the Blue Heaps, but by the mid 1850’s the town they had planned was starting to take shape and the Iron Works had become a industrial leader. However, with the collapse of the Northumberland District Bank which had been keeping the works a float the creditors were beginning to gather.

The Iron Works was forced into receivership in the late 1850’s and was kept running by 3 Inspectors. It was about this time that a group of local business men got together and created the Derwent & Consett Iron Company.  They took control of the struggling Works and began to turn the business around. 6 years later it was found necessary to form a new company and in 1864 Consett Iron Company (Limited) was born.

A few years later in October 1869 John Priestman, the manager at the time left and was followed by Mr William Jenkins formerly of Dowlais Iron Company, Wales. Initial Jenkins had been warned against taking up a position at Consett as most people had forecast its doom due to its isolated location and lack of ironstone. It was credit to his great foresight that he decided instead to make a visit to Consett to assess not only the natural resources of the area but also its workers.

A new chapter of the Consett Iron Works had begun. Jenkins was a force to be reckoned with and brought in a new way of thinking about business. He took note of trends and new innovations and began to specialise in plate and he also invested in a small steel plant inside the works site itself initially as a small part but which eventually became the parent of the company by pure demand. He was forward thinking, an advocate for his workers and a man held in great esteem throughout the iron and steel community.

Jenkins died in 1895 in Consett Hall, where he had resided for 26 years only a few days after his beloved wife. He was respected and loved by the whole community, from businessmen to the humble workers and the town mourned. This mans foresight and drive had taken Consett Works through times of industrial decline of Iron and driven forward to making it the giant of Steel, surpassed by only a very few others in the country. The little usurper on the desolate hillside, miles from the sea, had done what most other Iron Works in the North had not, it had survived and thrived.