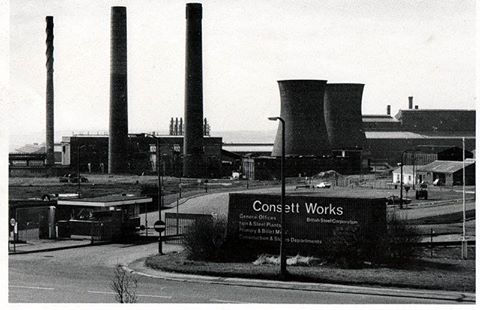 For the second time in a decade, one of my Google Alerts has brought a story about Consett to my attention.

Today, it is Home History Demolition and Rebuild – The Birth of the Modern Town – Consett… (Consett Magazine). Six years ago, it was a story “Focus on Consett meltdown as steelworks shut” featuring photographs taken in 1981, when the steelworks shut; see http://www.chroniclelive.co.uk/north-east-news/history-newcastle-north-east/remember-when/2009/06/17/focus-on-consett-meltdown-as-steelworks-shut-72703-23891228/

How prescient today’s Google Alert, when steel is again dominating the news headlines, as the production of bulk steel in the UK is being threatened entirely.

I have lived in Sheffield since 1971. I take the opportunity to note that, between 1979 and 1984, Sheffield lost nearly 50,000 jobs in steel and engineering – that’s more than the UK coal industry as a whole lost in any 5-year period.

As a result of seeing the article and pictures in 2009, I submitted a short article about my own ‘contribution’ to the closure of Consett’s steelworks. I have no idea whether it was ever used or reproduced.

The Chronicle’s report and photographs of the demolition of Consett Steelworks brought back some vivid memories.

In 1967, I was recruited to a group of (supposedly high-flying) A-level Economics students by the University of Birmingham to undertake a sub-regional economics’ study in the north-east.

Following home- and university-based research, we set off to spend a week to undertake our local research. Based at Edmundbyers Youth Hostel, we travelled widely to conduct one-to-one interviews with bosses, trades union representatives, academics and politicians.

For me, an afternoon interview with T Dan Smith (the dynamic, but later discredited, leader of Newcastle City Council) drinking whisky and tea in his office stands out.

We also made a number of visits, including to steelworks, shipbuilding yards and pits – crawling along an undersea seam at Horden Colliery was a highlight.

I had specific responsibility for reporting on the prospects for the steel industry in the north-east generally and for Consett specifically.

My sharpest memories of Consett are:

At the conclusion of our research and visit, it fell to me to make a presentation on the Prospects for Consett Steelworks to members and officers of Consett Urban District Council and various other interested parties.

I set out a summary of

Then, with all the naivety and arrogance of youth, I concluded that Consett steelworks would be closed within 10 years.

You can imagine the response I got from the audience – overwhelming denial, anger and derision, although a few contributions were more measured and thoughtful.

However, I was allowed to leave un-bruised and alive.

And, of course, I was wrong.

Although the decision to shut the works was effectively taken within 10 years, it was not until January 1981 that they were finally closed.