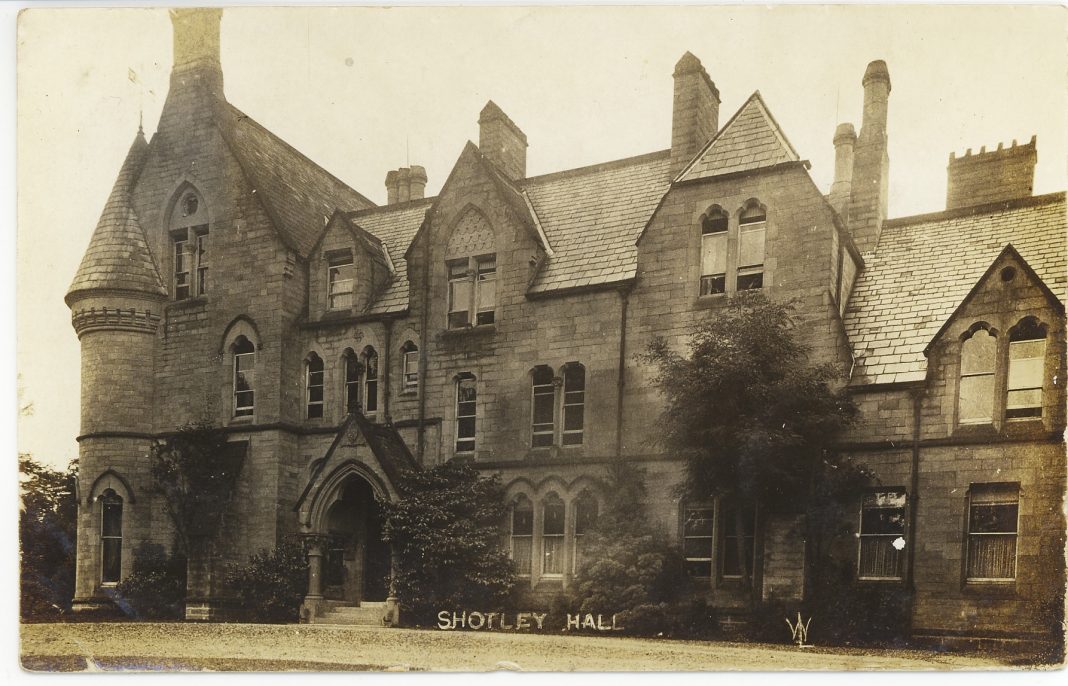 The original Shotley Hall was of Queen Anne style and built at the turn of the early 1700’s. Its position was much closer to the River Derwent and is believed to have been built and owned by Dr Andrews a physician to the Duke of Cumberland. It was reputed to have been built on top or very near to the original house of the Maddison family. The Hall had many owners over the years, eventually being acquired by Arthur Mowbray. It was from him that the Wilson family of Nent Hall purchased the entire estate 1818.

The manorial Shotley Hall that we see today, although it has changed somewhat, was completed in 1863 after 7 years of construction for Thomas Wilson Esq., the old hall (later to be known as Derwent Dene) not being to his liking. Thomas had lived in the old Hall with his father and continued to live there part time during the construction of the new building. Shotley Hall was built by the renowned architect Edward Robert Robinson in the style of the Gothic Revivalists. Its main distinctive features being the tower, conservatory and its many types of windows, upwards of 100 including 10 in stained glass being designed by William Morris. During construction the stream which then ran through the property had to be diverted to safeguard the structural foundations.

Thomas Wilson Esq. was the only surviving son of John Wilson Esq. of Nent Hall. He was born 16 Feb 1800 in Nent Hall, Alston son of John & Mary Wilson (nee Bownas). John had major stakes in the lead mining in Alston Moor, especially the mines of Hudgill Burn. In 1823, following his fathers death, Thomas took over the running of the business and continued to build the family fortunes. Thomas lived between the two area’s only taking up permanent residence in Shotley once the new Hall was completed in 1863. Thomas married Elizabeth Cunard daughter of Samuel Cunard of the famous shipping family, on 30 April 1868. Unfortunately the couple had no children. Thomas died on 22 April 1880 and was buried in St John’s Church, Shotley.

In his will he left the Hall and controlling shares to his nephew, John Wilson Walton, son of his sister Maria. However, there was a clause within the Will which stated that his nephew had to changed his name to include Wilson at all times and also to take on the coat of arms of the Wilson family along with his own Walton line. In a decree of the crown, published in the London Gazette in October 1880, the Queen gave the family the permission to use the surname of Wilson after that of their own Walton and also to utilise the armorial arms of the Wilson family within their own armorial arms. So John Wilson Walton became officially John Walton-Wilson. The Walton-Wilson line continued to live in Shotley Hall until its sale in 2016.