As a coin collector I had always enjoyed most forms numismatic, although my main collection is British bronze coinage 1860 to 1970.

I have got to the stage now that most of the coins I want are literally out of my reach cost wise, although I am always hopeful I will find some rare piece in a bulk lot or bargain bin. It does happen so you never know one day that elusive 1919KN in high grade my just drop into my hand. I can keep hoping. So I have now started branching out into other area’s of coinage. One such area is token coinage which I find most interesting and where this story focuses. 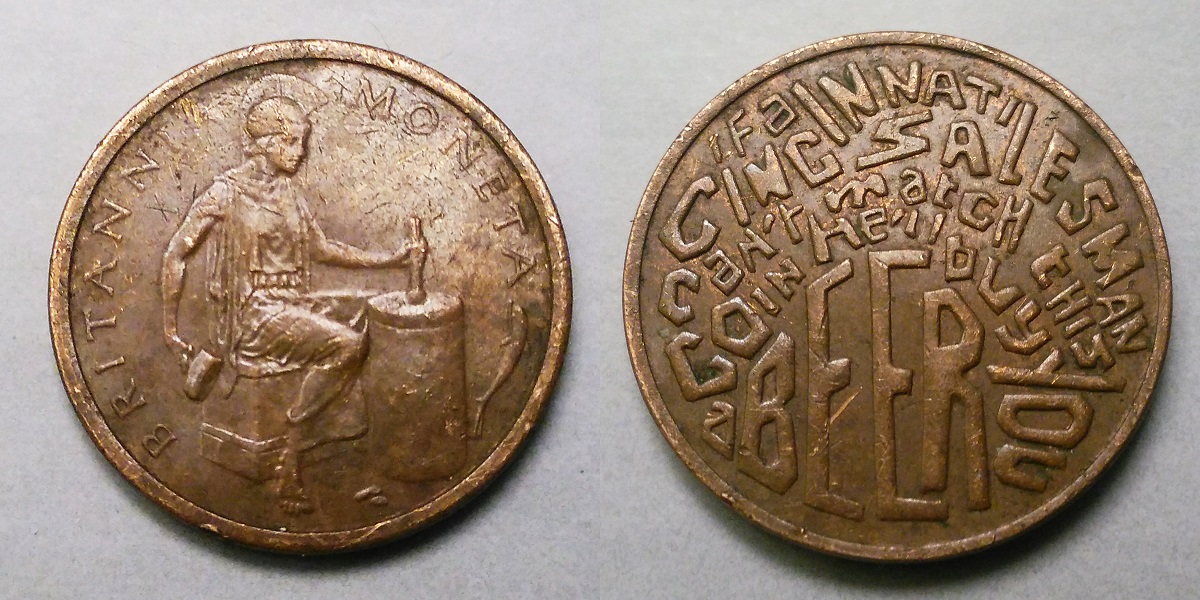 Over the past 2 years I started picking up bags of odds and end tokens for only a few pounds. There are the regular bandit tokens and gaming tokens but also lots of other interesting pieces. A good example was a £50 Playboy token from the London Playboy Club, which has now been closed for 30+ years, as well as brass Spade Guinea advertising tokens from the likes of Beecroft Bros and Sainsbury’s. I have also enjoyed picking up local tokens as well, from the likes of Shotley Bridge Co-Op, London & Newcastle Tea company based in New Market Street, Consett as well as a nice starting collection of Club Pint Tokens, something I really enjoy. All have given me hours of fun in research and I have started building up quite a good collection. Nothing of a major value, just interesting.

While trawling a certain auction website, I came across a large token collection at the starting price of 99p with £3 postage. There was over 1.5kg and I saw a few items I liked the look of so placed a bid of £5.67, strange bid I know but it has been a lucky for me before. I moved on and didn’t give it another thought. About 3 days later a ping when off on my phone and I had won, in the end paying the princely sum of £5.60 +£3 postage. I was happy enough and thought it would be a nice little lot to go through.

Two days after I sent payment they arrived with a massive thud on the floor just as I was heading out to a meeting. So I placed them to the side with major anticipation for later. Very sadly I thought about them throughout the day and became quite excited. On getting home later that day I headed for my own little private haven in the corner of the upstairs room which I reserve for my coin research. I promptly emptied them out carefully on to the top.

There was the normal common pieces like the Bell Fruit Machine tokens and Eurocoins, but also quite a lot of interesting looking bits. First to grab my attention was a beautiful looking 1924 British Trades Exhibition token, one I had been looking for for sometime. Fantastic I thought, that has made the cost worth it right there. A nice little £6 token. Next I saw a Cincinnati Beer token one of the things I had spotted online. So I picked it up and laid it aside. It went on like this for the better part of an hour. Sorting, putting into packets or into my standard machine token album.

So with piles of tokens and other odds and ends still in front of me I moved and knocked the table scattering them all across the floor. So down I went to pick them all up when I spotted something I hadn’t seen previously. Staring up at me was a little bronze coin with the Britannia Moneta logo. For anyone who doesn’t know this is the logo used by the Royal Mint for their Trial Coins. So I placed it back onto the top and picked up all the other tokens as quickly as I could so I could get back to the little coin.

I picked it up and turned it over and to my astonishment it was the Cincinnati Beer token logo on the other side, the one I had saw earlier. I was over the moon but had never seen anything like this. So onto the web I went. I trawled site after site, page after page and nothing.

So I posted a query up on a few of the online forums, again nothing. It started to look like I was never going to find any information at all about it. So I decided then to go for a different approach and began going through past auctions. It took a while but eventually it came up trumps. Lot 480, 28 September 2005 | Dix Noonan Webb as part of the THE JOANNA TANSLEY COLLECTION OF PATTERNS, PROOFS AND COINING TRIALS.

Footnote
This piece was struck on one of the Cincinnati presses installed at the Royal Mint in Llantrisant, Wales and set up for the initial striking of the New Decimal Penny production in 1970 ready for release in 1971. The only possible time the die-pairing could have existed is at the Royal Mint, as the ‘Britannia Moneta’ dies are never allowed to leave the facility; the Cincinnati die would have been brought in to the Mint, used to set up the press and demonstrate that the die was correctly set, as part of the commissioning process, then removed from the site when Cincinnati’s engineers left

I couldn’t claim my coin was Extremely Fine, more like fine, but definitely very rare in any condition. So for a few pounds I managed to find not only a load of nice additions to my collection but also a lovely piece of numismatic history.

For any one locally who enjoys anything Numismatic, from Old Coins to new, from tokens to medallions, there is a local Facebook page the Derwentside Numismatic Group. It is a friendly and welcoming page for all.