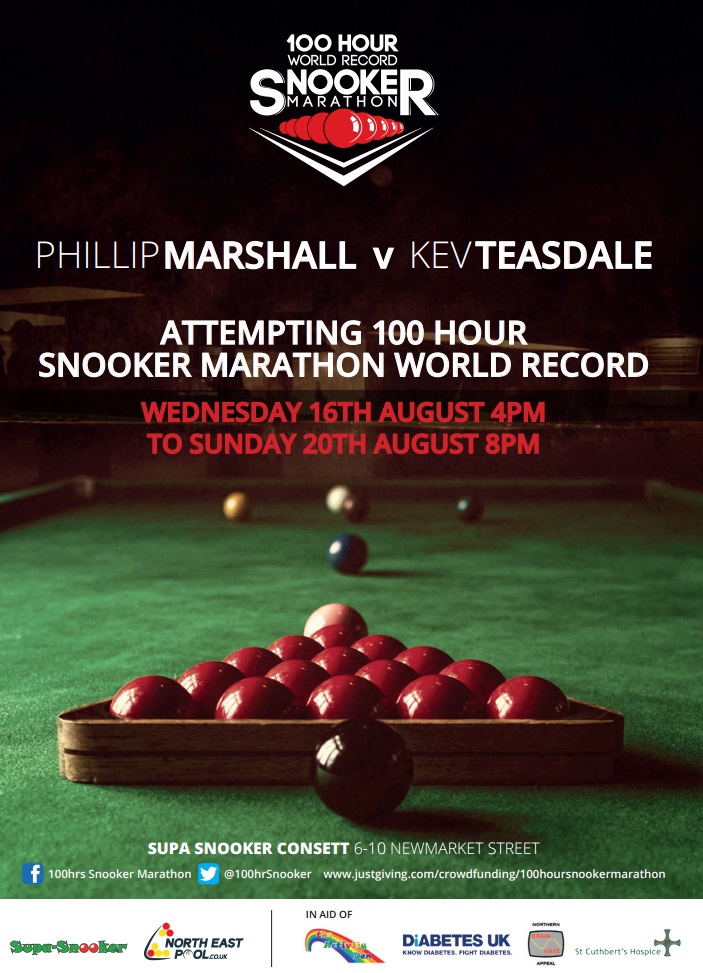 Two snooker players are aiming to complete a 100 hour snooker marathon, breaking the current world record and raising money for charity at the same time.

Phillip Marshall, 25 from Consett and Kevin Teasdale, 39 from Gilesgate, will play snooker continuously from 4.00pm on Wednesday, August, 16 until 8.00pm on Sunday, August, 20.

The event will be hosted at Consett’s Supa Snooker Club on Newmarket Street and any money raised will be split between four charities chosen by Phillip and Kevin. The charities which will benefit are The Activity Den, a local Young People’s charity, of which Phillip is a Director, The Northern Brainwave Appeal, St Cuthbert’s Hospice and Diabetes UK.

Phillip and Kevin have known each other for several years and have played each other on numerous occasions, although this is a charity attempt, there is still a friendly rivalry there between the pair, Phillip said: “We got to know each other playing pool, but we soon started playing snooker too. Kev’s highest break is 128 and he is a much better player than me, although I’ll still be trying my hardest to beat him!”

Phillip completed 65 hours of continuous play a few years back but wants to take it a stage further. He added: “Ever since I heard my record was broken I wanted to give it another go, the current record is 85 hours 19 minutes so decided on the magic 100 hours. We will get five minutes break every hour but other than that it’s pretty much four days of snooker”

The duo are trying to raise £2,000 to raise money for charity by completing the 100 hour Guinness World Record Snooker Marathon – To donate visit their Just Giving Page.