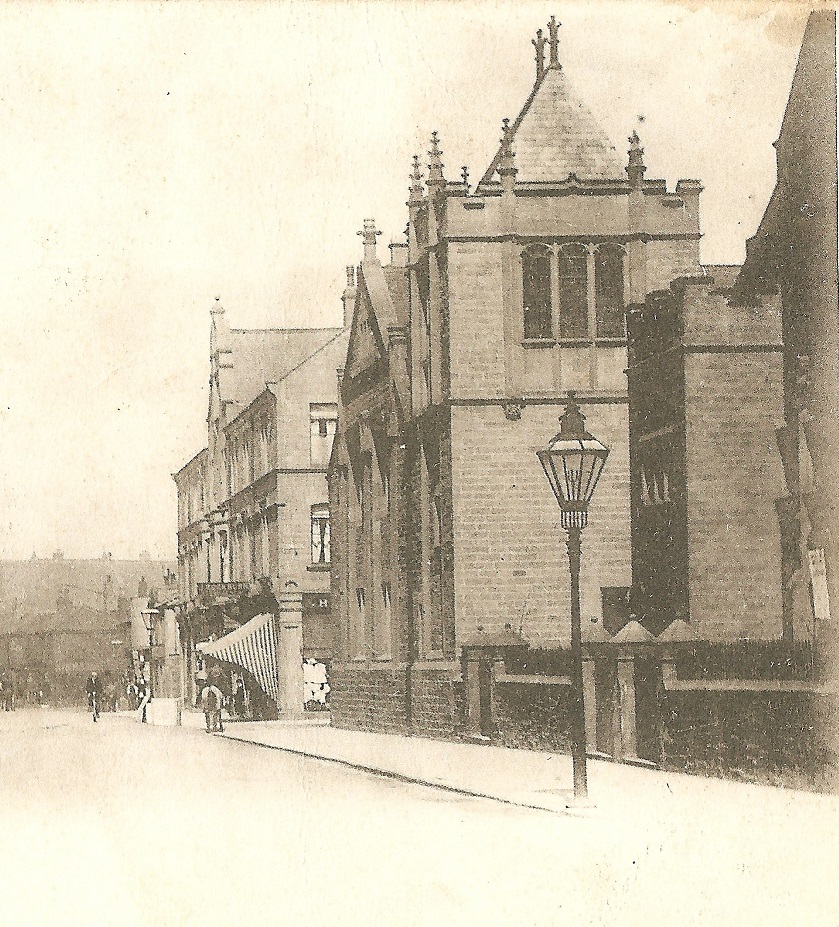 My mother used to purchase her groceries at Aynsley’s in Middle Street. I seem to remember that the shop manager was called Harry Garbutt – – a friendly, polite man with a very professional attitude to the business. He always wore a shirt and tie and a long, immaculate, white coat.

I was usually sent to do the shopping on a Saturday morning, equipped with a shopping list and a wicker basket – – no plastic carrier bags in those days!

There were always queues but everyone respectfully awaited their turn without complaint. Sugar, flour, tea and biscuits and such like were kept in large bins with glass lids on the shop floor. They were weighed out, in pounds and ounces, by an assistant and placed in paper bags.

Butter, margarine and lard were cut from large blocks on the countertop. Bacon was sliced on a machine, the rashers deftly caught by hand as they appeared from the stainless steel blade– quite scary to watch! It looked and tasted quite different to the bacon we get today. The fat was firm and
waxy, not wet and soft, and it was sold with the rind on.

Sometimes the rind was stripped off with the back of a knife and cooked separately, the resulting fat being saved in a bowl and used in other ways. It was very tasty when spread on bread and then we enjoyed the delight of chewing and sucking the crispy rind. We did not worry about high cholesterol levels when we were kids!

Cheese was also cut from a block and the choice was either cheddar or cheshire. Cheaper cooking cheese was also available which was hard and strong and made great welsh rarebit. Eggs, stamped with the little lion, were sold loose and great care had to be taken to ensure they did not get cracked – – if they did, there was an awful mess in the paper bag!

The cost of every item was written on each bag in pencil and added up – – without the aid of a calculator! All the groceries were placed in your basket and off you trotted home. Mission accomplished’

It probably took all morning!!

My first memories of school were at a kinder-garden in one of the terraced cottages at Shotley Bridge where we used a slate with a special pencil which made a terrific screeching noise when you pressed on too hard. The piece of grey slate was framed with wood and if you made a mistake, which happened quite often, you erased it with a damp rag (or spit on your hanky or finger if no one was looking!).

Further education came in Consett at the Junior School where numbers were drilled in to our little brains as we chanted the tables every school day – I must admit that it did pay dividends later in life. The slate was made redundant and replaced with pencil and paper whence we became slaves to copying the alphabet and learning to spell.

Later, seated at a wooden desk, complete with self-contained ink pot, we graduated to the horrors of crossed nibs, blots and ink-stained fingers. Some kids gave themselves tattoos, stabbing themselves with an ink-loaded nib – – and probably getting the cane for abusing themselves!

I only got the cane once but can’t remember why – – I only know that it hurt and I vowed to behave myself in future. You had to hold your arm out stiff and straight (best to close one’s eyes!) and wait for the lethal weapon to be delivered across your quivering fingers with a loud swish, causing an intake of breath and possibly tears!

We all lined up outside at ‘break time’ for a daily intake of milk. The bottles, sealed with cardboard tops, were delivered earlier in the morning in sectioned, metal crates. In the summer it could taste a a bit sour after standing in the sun for a few hours and in the winter you had to knock the ice
off the top!

Modern school girls would be horrified to wear this gym tunic
with knee-length wool socks and lace-up shoes! In winter a thick, cotton liberty-bodice was worn underneath a winceyette blouse and long-legged thick knickers with elasticated bottoms to keep out the cold!