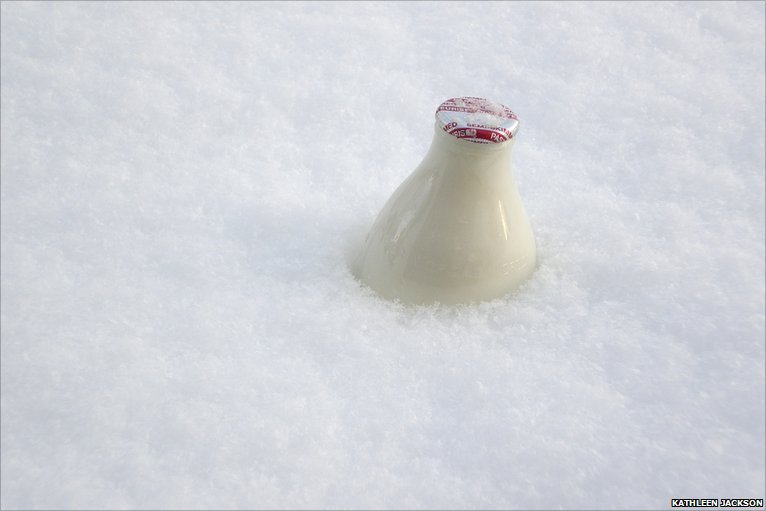 A winter’s tale that just happens to be true, and that’s a fact from me to you.

Once upon a time as our milk delivery girl called Sharon was on her rounds, she was asked by an old chap quite politely of course, “Excuse me miss, but would you mind putting my bottle of milk inside of my gate instead of outside? Because you see I have a bad chest, and I get cold easily going out into the snow to get it”.

“Alright then”, answered Sharon sweetly and with a smile. “I will do that for you”.

Two weeks later the old chap again approached Sharon and requested “Excuse me miss, but would you mind putting my milk halfway along my garden path? You see I have a bad leg, and it’s a long way to go to the end of the path”.

“Alright then” answered Sharon through gritted teeth and trying to be pleasant, “I will do that for you”.

Two weeks later, Sharon was once again approached by the old chap and requested to.

“Would you mind putting my milk next to my back door? You see I have a bad back and it’s a bit of a struggle to get along the path and back”.

“Very well then” said Sharon rather loudly. “But let me tell you this mister. For an extra ten bob a week, I’ll bring the bloody cow down and squirt the damn stuff straight through your letterbox. Will that please you, you old goat?”

Now the moral of this story is, and I’m sure you’ll agree, you may ask a favour off this lass, but not too often. Sometimes you might even fancy making a poss.

Then remember, she will look with favour on you. You’ll see, if you order an extra pint or three. But too many requests, she will ignore.

In fact lad, she won’t even bring the bloody milk to your door.