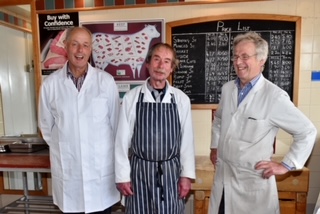 Forster Bros have been an integral part of Consett Life since 1945.

Three entrepreneurial brothers from Milkwell Burn in Hamsterley opened a business providing fresh meat, bread, pies, pastries and bakery products to feed the growing community. They ran vans from their Aunt’s shop in Medomsley and delivered their delicious wares all around the area. With this success under their belt, Bill, Alf and George moved forward, developing their business further afield.

They moved to Consett and along with the butchers and bakery, they set up an electrical shop, all based in separate properties in Victoria Road Consett. They worked from a bakery in Blackhill – opposite what used to be Doran’s – close to the Park Royal.

Alf, a baker himself, synergised alongside George Dance – who was previously a foreman at Hanson’s bakery – and together they augmented the now famous bread recipe he brought with him.

George Forster oversaw the butchery department along with Bill who was an electrical engineer. It was obvious these brothers could turn their hands and heads to anything and with boundless energy they proceeded to expand their businesses.

The brothers married and raised families while still running their trades and investing in more.
They opened a shop in Stanley three doors up from The Royal and next door but one to Manfredi’s; and around this time Bill tried his hand at farming, while Alf took on a bakery in Darlington.

With success after success they invested in a coal mine at Hedley on the Hill while buying up property in Consett itself, including the block where The Carlton used to be.

Later the whole family bought the Derwent Walk Public House which used to be a railway station.

They then invested in The Anchor at Whittonstall which was purchased as a country pub and the restaurant was built on, using the stone that came from Allendale cottages.

Relying on others to manage these ventures, they realised one can only be in one place at one time and concentrated their efforts on their local butchery, bakery and electrical businesses.

With their vans garaged in East Law and Ebchester, they began catering for weddings, funerals, and social events in church halls and community centres, happy to provide the complete package – not only a sumptuous buffet but the crockery, napkins and cutlery as well!

The three brothers brought their three successful and expanding businesses together in 1953 in a purpose built shop in Victoria Road, opposite St Patrick’s Church and the old Post Office.

And here members of their growing families began learning the trade, while others moved in different directions. The family opened another shop in Leadgate in the early seventies providing the same good quality meat, baked goods, and bread.

Stephen and Billy – sons of Alf and Bill respectively – worked in the Consett and Leadgate shops along with Eric Jones – who is now the longest serving staff member – and Barry Musgrove.

Barry the baker who trained and learned his trade under George Dance has been producing the delicious bread and bakery products that we love and know so well for many years.

These four men who started working for the business in their teens have given, between them, almost 200 years of service to the people of Consett.

Yet they are not only noted for their delicious Forsters fare. Their clientele are always greeted and served in the delightful traditional way, empowered to buy as much or as little as they need while enjoying the jolly banter and customer service that Forsters are renowned for.

My childhood memories are of collecting the ordered bread, pies, ham, pease pudding and the joint for Sunday lunch on a Saturday with my Uncle Michael – and because he would only eat their bread – he always made sure the orders were in early in the week. My thoughts stray back to Christmas, viewing all the turkeys lined up in the huge window, and always being amazed that you just had to say who you were and they brought one out with your name on it!

And who can forget the Gingerbread Men which I was buying only last week for my granddaughters.
Those of you who have tasted the delicious home baked meat or ham and egg squares will agree they are like none other. I’m sure everyone who frequented this establishment could tell their own tale and list their favourites for your perusal.

The delicious recipes have remained consistent throughout, and none of us could imagine them not being there, But as the saying goes; ‘All good things come to an end’ The decision to retire was made with the closure of the Leadgate outlet on May 30th.

I would like to say a fond farewell to Forsters; you have been a part of my life for 65 years and I want to thank you for everything.

Consett will not be the same without you.