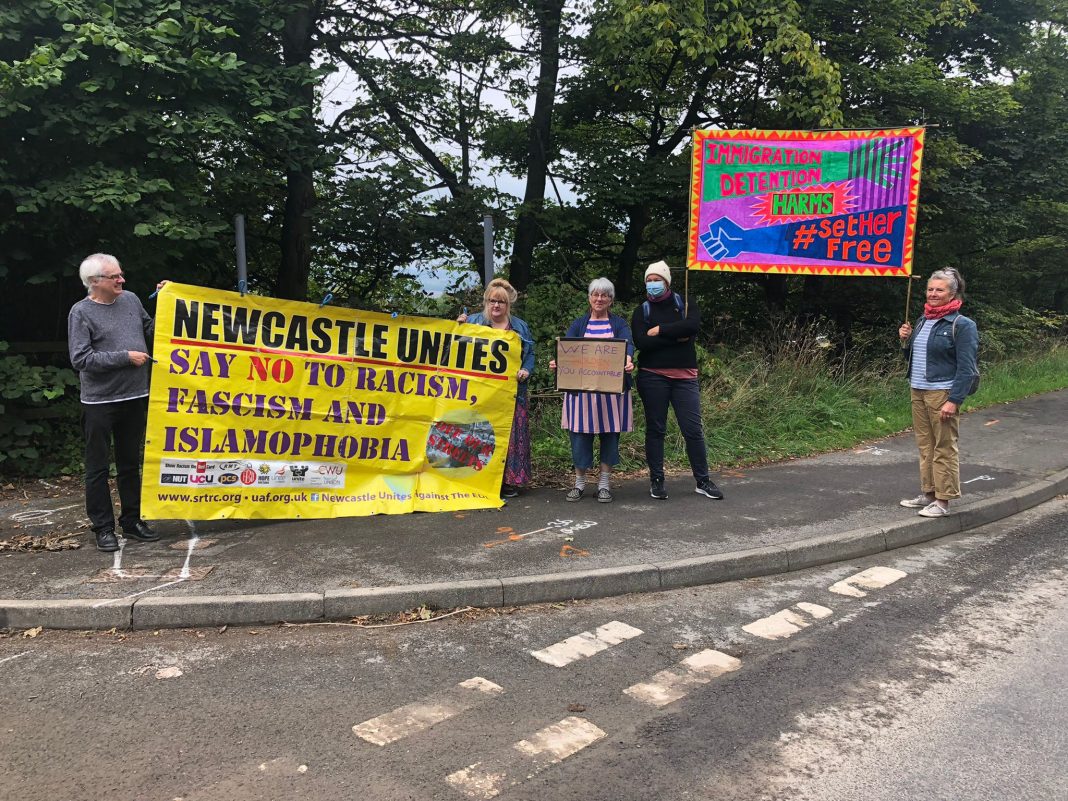 A coalition of local people and campaign groups from across the country continued their monthly protest against the proposed detention centre in Consett, County Durham, on Saturday 18th September. This was the fourth demonstration organised at the site. Regular demonstrations will continue to happen on the third Saturday of every month.

The scenes we have witnessed of those fleeing Afghanistan has brought into sharp focus the plight of all those seeking asylum. There will be many who were left behind who would choose to leave. If they seek to travel to the UK they will potentially be deemed as entering ‘illegally’ and subject to the current government’s ‘hostile environment’. Their immigration status will remain insecure and they could be at risk of detention.

If it opens, the centre will detain women with insecure immigration status who are at risk of deportation by the Home Office. Detention is an inhumane practice that has been responsible for the harm and traumatisation of migrant communities (1.), (2.). Deportation puts individuals at risk of persecution back in the country from which they fled, and tears families apart. While detention of any kind should not be used, it should be noted that the UK is the only member of the 47 Member State Council of Europe to use the inhumane practice of indefinite detention (3). Many people with lived experience of detention have described it as prison-like or worse in its conditions.

Agnes Tanoh, Detention Campaign Spokesperson at Women for Refugee Women, who was herself detained for over 3 months at Yarl’s Wood immigration detention centre before being granted refugee status, says:

“I know the lasting harm that detention causes women who are looking for safety. When I was in detention, I saw a woman try to kill herself, I saw guards abuse women, I saw families torn apart. I don’t want this to happen to any more of my sisters. Do not let Hassockfield open as a detention centre for women. Instead, let us show compassion and build a kinder society.” 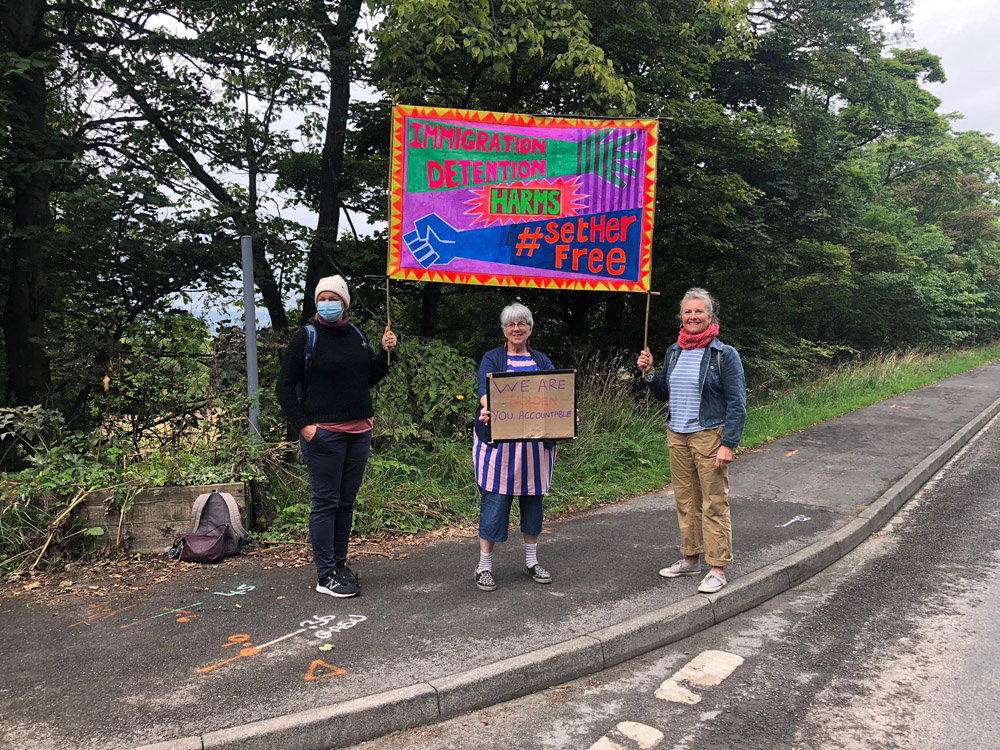 Owen Temple from the No To Hassockfield Campaign said;

“I am ashamed of the way my country treats immigrants. We now have the worst record in Europe for detaining immigrants without trial and without time limit on their detention. Government preaches “British Values” but ignores the most basic principle of Magna Carta – that people should not be imprisoned without trial.”

The Home Office plans to detain 80 women at the Hassockfield Immigration Removal Centre (now being renamed Derwentside IRC), and its proponents claim it would provide 200 local jobs.

“Richard Holden MP claims (4) the centre will bring many ‘good jobs’ to the area. But these jobs will be with outsourcing firm Mitie, notorious for its bad employment practices (5) across a range of sectors, as well as its mistreatment of detainees. Just this year, trade unions Unite, Unison and GMB have condemned Mitie for discriminatory policies against workers (in Heathrow airport), Covid safety failures, and breaking promises to pay the living wage (6) (7) and unsocial hours payments (for NHS workers during the Covid pandemic) (8). Are these the sort of ‘good jobs’ Richard Holden is promising? He also doesn’t mention the alternative use for the Hassockfield site: the housing and leisure development which had previously been planned. That would bring local jobs too – if the centre’s development was cancelled.” 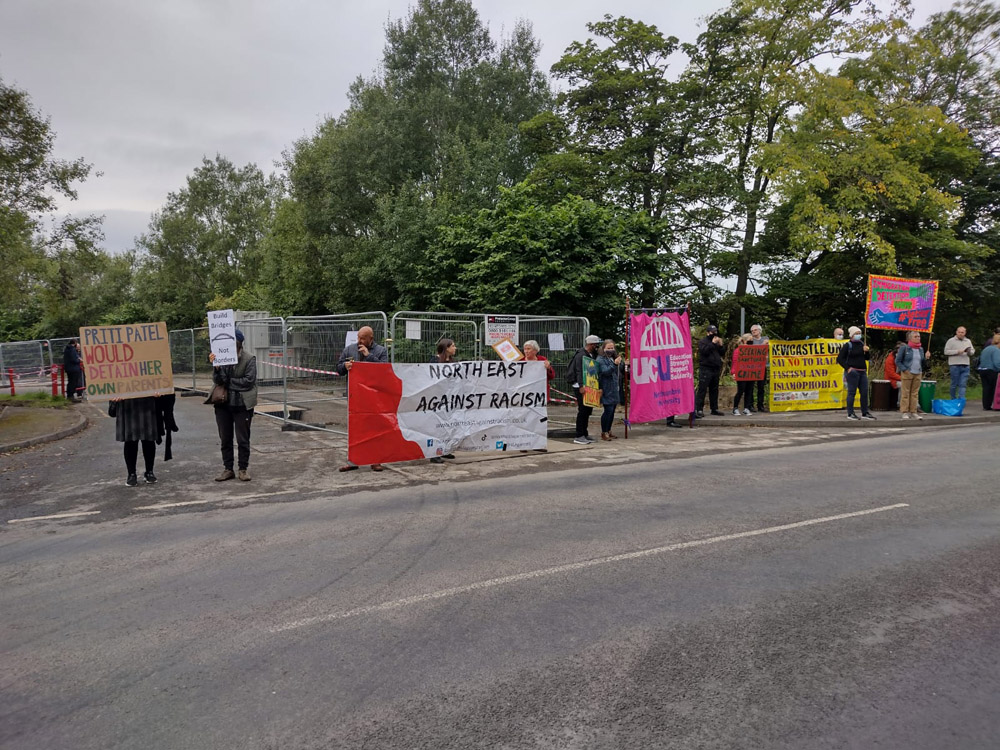 Former MEP, women’s rights campaigner and member of the No To Hassockfield Campaign, Julie Ward, said,

“Women are hugely impacted by conflict and various global crises, including climate breakdown, which leads to unsustainable lives, extreme poverty, hunger, increased violence and risk of trafficking (9). We also see how authoritarian regimes seek to limit women’s freedoms and punish them for aspiring to be educated, to run businesses, to stand for elected office, to wear what they wish. Women asylum seekers have often experienced terrible violence at every stage of their journeys. Detention is a form of institutional state violence, which can have a profound psychological impact for years to come. Instead of locking up vulnerable women with the intention of deporting them back to face the likelihood of more violence we should be treating them with compassion and dignity. The UK is out of step with many of its neighbours in the way it treats those seeking asylum.”

The Ministry of Justice are pushing ahead with plans to open the centre with the first women potentially being detained at the end of the October. No to Hassockfield are still exploring with barriers potential objections to the site opening.

A coalition of local campaign groups Abolish Detention: Hassockfield, People’s Assembly, and No to Hassockfield are now campaigning across the region at mutual aid events, anti-racism rallies, interfaith initiatives, in town centres and village fayres, to build support for the campaign in the local community. Local people have expressed anger at the site being reopened and are joining forces with people with lived experience of the hostile immigration environment to campaign to end detention.