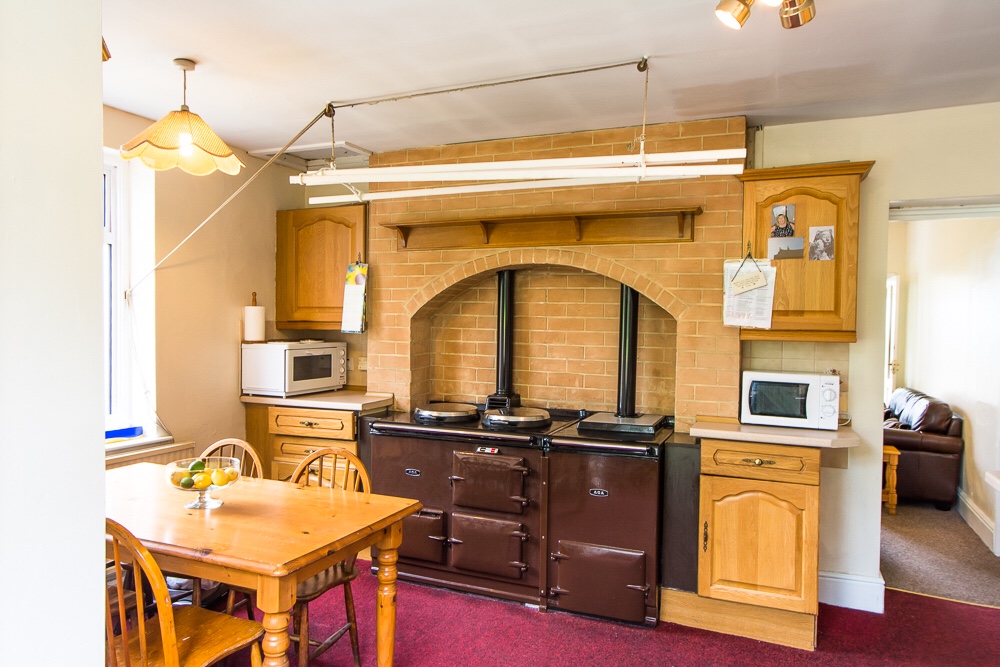 I’ve always been interested in cooking from being young, when I observed my family making delicious food with very basic ingredients. My Mam’s specialities were big pans of hearty soup and oven baked casseroles packed with flavour and served with mashed or roast potatoes and heaps of vegetables.

My Auntie Rose made the best Yorkshire pudding, rising gently in a rectangular tin tray with the crispy sides curled over like waves, while the centre remained soft. Her Sunday apple pies freckled with burnt sugar were legendary, and we looked forward to them served deliciously with Birds custard at teatime. In Autumn, she added the blackberries we had lovingly collected on our walk to Knitsley the Saturday before, after we’d soaked them in water to make sure there were no tiny clandestine worms trying to avoid detection.

I learned to make beans on toast at an early age – still one of my favourites – but couldn’t get away with the Cross and Blackwell variety which were bought by mistake a couple of times. I guess, we have all been brought up with Heinz!

My Dad made the best Thackery’s bacon sandwiches on Forsters white uncut doorstop bread, dipped in the frying pan juices and served with a good cup of Ringtons tea, and my brother made Welsh Rarebit with strong cheddar cheese, Coleman’s English mustard and Worcestershire Sauce.

Our neighbours in Consett were all experts at corned beef and potato plate pies, delivering any surplus to us.

None of these dishes cost the earth but were made with love, and I loved the way sharing these delights with friends and family made them taste all the better.

While we had a typical 1960’s white and blue enamel gas cooker, my Auntie Rose sported a 1940’s New World version with a huge plate rack at the top.

I remember I wasn’t allowed to use it as it had a special lighting technique. My Uncles – Pat and Michael – would roll up some newspaper, tentatively resting it in the flames of the coal fire in the kitchen, then kneel down in front of the oven; turning on the gas with one hand, while they stretched to the back of the oven to light it with the other taper held hand. The boom let us know all was well and the cooking could begin!

Sunday dinner was the best. All the vegetables prepared early morning, with the Yorkshire pudding batter mixed and resting in a blue and white striped bowl with a plate on the top. The tin foil covered meat was set on low, before we all trooped to 11 o’clock Mass at St Patrick’s in Consett.

It was action stations when we got home. I set the table while the adults turned up the heat so the vegetables could be boiled within an inch of their lives, which made it possible for us all to sit down before the children’s Novena started at 2pm. Someone was given the important job of stirring the gravy while adding Comptons Gravy Salt to the meat juices and flour, I moved into this role as I grew up, being very conscious that if there were any lumps I would be demoted.

When I was much older in my late twenties and married to Stewart with one year old Michael, I learned to cook in a whole new way. We moved into a house in Fairways and to my delight in the centre of the kitchen was a 1920’s Aga that had been converted to gas. I loved the rack that produced square patterned toast in seconds and the lower simmering oven that would cook everything to perfection while we went out shopping or got on with other tasks. I loved it so much that when we moved out of the area I had to have another one.

In Tantobie, our Aga become one of the family, making delicious food, heating the water, keeping us warm, while drying our clothes on the airer, worked by a pulley. On many an occasion my children noticed singed burn marks on their school uniform after I warmed their clothes on the closed lids on wintry mornings. Unfortunately they couldn’t be repaired by a navy blue felt tipped pen so I was forever buying new jumpers.

And so to today, with my son and two daughters Katherine and Emily grown and flown the nest. I’m learning to cook again in an entirely different way, experimenting with my newly acquired purchase from Forster’s in Consett.

Just the other day, after preparing a pizza for my granddaughters tea in less than five minutes, I overheard Eleanor say to her younger sister Matilda,

‘Grandma’s got a Ninja!’
I’m not sure she was any the wiser, but within 5 minutes they both had empty plates!