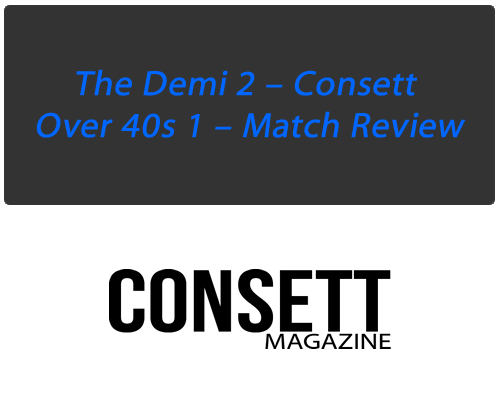 A late goal for Consett Demi FC saw youth narrowly overcome the challenge of experience. In a friendly match at Consett AFC’s Northern League stadium, the Consett and District Sunday League side defeated Consett Over 40s 2-1 in a keenly fought contest.

The younger side were made to work extremely hard for the success though, the Over 40s proving there is still some fight in the old dog yet! The 40s came racing out the traps and caught the Demi cold, taking just 70 seconds to draw first blood.

Striker Danny Gilbert was up for the fight from the start, and he ran on to a flick on to expertly lift the ball over Graeme Burdon to give his side an early lead. The Demi found their feet after the early setback and were back on level terms midway through the half when 21-year-old Adrian Bailey hit an unstoppable lob over the opposing goalkeeper from the edge of the box.

Both teams created chances after the restart, Lee Baum’s thunderous volley for the Demi well saved, while Gilbert was denied a second when he struck the post. With the game destined for a penalty shootout, substitute striker Dan Coates sprung the offside trap and ran clear to slide the winner home with less than 10 minutes remaining.