So far the 2014 FIFA World Cup has been a tournament filled with action, excitement and even a good dose of controversy. With England, Italy and 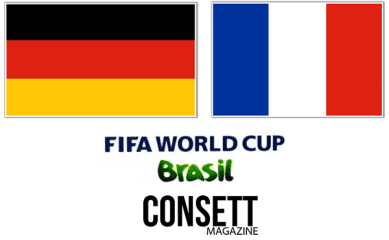 Spain all out at the group stages, the chance of a European nation winning the revered tournament on South American soil is looking ever slimmer. With most of the last 16 games now finished, one quarter final clash worth watching will be a European showdown between the ever present Germany and the classy underdogs France.

It was a tense affair from the Germans as they played Algeria in their last 16 clash in Estadio Beira-Rio as it wasn’t until extra time when Germany managed to score two goals to cancel out Algeria’s earlier strike and take the win. On one hand this is what everyone would have expected from one of the European favourites but the manner of the victory can’t exactly be considered convincing. If it wasn’t for the Premier League stars Arsenal’s Mesut Ozil and Chelsea’s Andre Schurrle, Germany could well have been going home from this year’s World Cup.

In the other last 16 game, France took on a Nigeria squad in turmoil over international team bonuses leaving everyone to suspect an easy game for the Franch squad. This couldn’t be further from the truth. Nigeria put up a solid fight with Emmanuel Emineke having a number of chances. Even with the Premier League talent of Jon Obi Mikel and Shola Ameobi, it wasn’t enough to beat France with 2 late goals from Juventus player Paul Pogba in the 79th and a last minute own goal from Joseph Yobo. With a number of current and former Newcastle United players in the side, many people in the North East have decided to give France a bit more support after England’s unceremonious exit from the tournament. Loic Remy, Yohan Cabaye, Moussa Sissoko and Mathieu Debuchy have all had a reasonable World Cup tournament so far with Sissoko scoring in the group stages.

Friday’s game between the pair is sure to be one to remember in this World Cup as two of the brightest European sides will go head to head at the Maracana Stadium in Rio de Janeiro. Whilst I feel that Germany are the stronger team, France may well have a few tricks up their sleeve to advance to the Semi Finals.