Home History From Consett People to the Brigade – Consett History 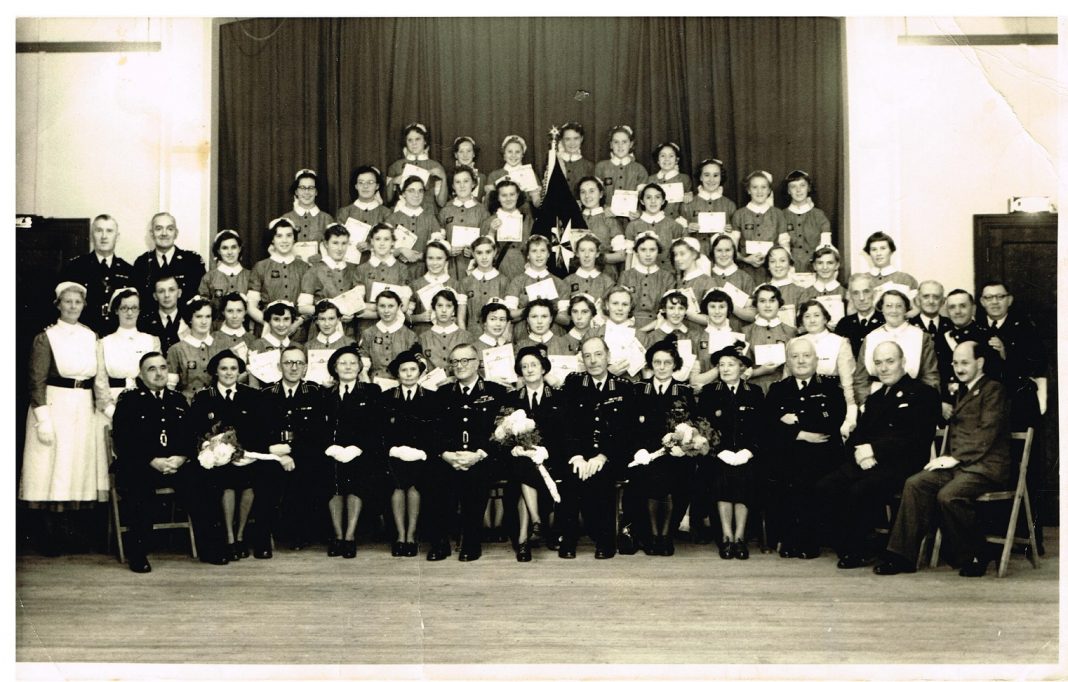 The St John Ambulance Association has always had a big presence in our area. Consett Iron Company had its own members of the St John Ambulance Association primarily founded and trained by Dr George Renton who had founded the CIC Infirmary in 1878. First mention of the members of the Association can be found as early as the mid 1880’s. However, the Consett & District Division St John Ambulance Brigade was officially registered 6th June 1909. The Brigade dedicated itself to the well-being and training of first aid to the people of the area. With the area being so heavily geared toward industry there was a definite need, especially within the coal mines.
Many of the mine owners encouraged their workers to train for their St John Ambulance certificates and in 1910 the Miners Accidents Act was introduced. This meant that there had to be at least 5 men at every mine who were trained in first aid and the use of breathing apparatus. Consett Iron Company were extremely fast to keep this as a norm and dedicate money and resources to the cause.

Meanwhile Consett St John began to grow. There was an almost immediate need for motorised Ambulances and a fund was organised. An initial ambulance was gifted in 1919 from the Iron working communities but the need was considerable and the Ambulance Fund continued. Eventually two more ambulances were purchased by public subscription and local fund raising by both the St John members and the people of Consett. Lloyd Clarence, owner of the Globe Theatre, gave half of the funds raised from his benefit performance in 1922 toward the Consett St John Ambulance Fund, the other half being given to the Consett Nursing Association. The problem now was where to park the Ambulances. Initially they were parked in John Square, under were the Trades was built in 1960, and on Medomsley Road, but it wasn’t ideal. A building was needed.

Once again the Consett St John had to raise more funds. The public rallied as did the local industry, specifically Consett Iron Company, along with the St John members and soon the fund was raised to procure a building. The initial building was to be built on Medomsley Road were a plot of land was found, money paid out and architect hired. But Consett Urban District Council dropped a bombshell, the land was due for slum clearance making building impossible. It had been a waste of money and time, although St John did manage to get most of the money back from the council. So another plot was now found on John Street. Owned by the Consett Iron Company they gifted it to St John. Demolition of a number of cottages and the old John Square buildings had to be completed before building could proceed. The Consett & District St John Ambulance Hall was built between 1932 & 1934, a true testament to the Consett St John and the people of the area who had raised the funds to build it. All the steel which helped form the building was gifted by Consett Iron Company helping to offset the cost. The Hall by a group of Local but was there for the use of St John members when required.

The Hall became a major part of the local area. Housing the Ambulances in the back with meeting rooms at the front and upstairs a hall with small stage for public events. Thousands of local people have trained as cadets in first aid at the Hall since its opening as well activities of many other community organisation’s. With the formation of the Ambulance Service linked to the NHS the need for the ambulances at the Hall was no longer required. However the Hall itself was still in great use. When not being used for Consett St John other community groups used it, Consett WI, theatre groups, dance groups, youth groups and so on.

Unfortunately the Consett St John Ambulance Brigade has dwindled over the years, not for the want of the members who are very much still dedicated to actively train new cadets whenever possible. A few years ago it was noted that the Trustees were no longer numerous enough to keep going, lots of the pressure and stress of running the building lying on the shoulders a couple of people. So with a heavy heart the building was handed over to St John Ambulance (National) to the understanding that they would then run the Hall. The Hall is still used by a number of local groups as well as Consett St John, including Consett Phoenix Youth who have made their home there over the past 10+ years, a group which I have a very personal attachment. We hope to see the Hall remain a community building and in the coming years grow from strength to strength.